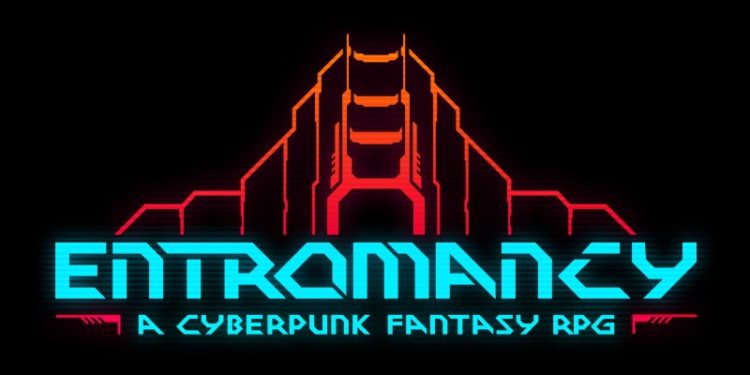 In August of 2018, I interviewed M. S. Farzan about Entromancy: A Cyberpunk Fantasy RPG. It has since been released, and I received a PDF review copy. As a reminder, this is a 5e OGL product, which in this case involves some fairly deep hacking of the system. If you’ve been reading any of my blogging over the last almost-ten years, you’ve probably figured out that I’m So Here For This.

The core conceit of Entromancy is that a new clean, renewable energy source and universally-useful material called “blue orichalcum” or “ceridium” is discovered, and it triggers the transformation of fantasy races (“aurics” or “underraces”) that have existed within the human genome. There are antigravity vehicles, dwelling space built downward from many major cities, and other cyberpunk elements that you’d expect to see.

The setting’s history and conflicts are, again, what I’d expect to see in a Shadowrun-adjacent setting. The treatment of aurics is a very on-the-nose analogue for present-day white supremacy and America’s vile treatment of asylum-seekers. If you’ve somehow gotten this far in life thinking that cyberpunk or any other -punk would be apolitical, disabuse yourself of that notion immediately. The setting isn’t a pure polemic, though – every side has its bad problems.

It’s a fairly short setting presentation, though later chapters – monsters, equipment, magic – reveal more about the setting. It’s definitely enough to make a good start. I’m not delving into this in detail, but at a quick read it looks like good content. I like its heavy focus on characters and their personalities – it puts me in mind of my other favorite cyberpunk game.

I’m particularly interested in the engine-level tweaks that Entromancy makes, so I want to run those down.

Momentum is my current front-runner for a Use It Tonight! rule from this book, and I’ll be damn impressed if anything surpasses it.

The races of record are Dwarf, Gnome, High Auric, Human, and Low Auric. Racial features are very stripped-down. Dwarves, Gnomes, and Humans more or less do what you’d expect, with some minor differences – I love the Gnomes’ device-identifying power. High Aurics are… not exactly elves, but magic-sensitive, ambidextrous, and immune to vertigo. Low Aurics are more direct parallels of orcs or half-orcs, but I adore their ability to use their bodies as cover for characters of other races. That’s such a great mechanic for representing their physical presence.

The fundamental structure of classes and features is a lot closer to 13th Age, with its approach to talents, feats, and spells. You also choose a subclass-like archetype – each class has two. Each class also has a default ceridium (magic points, more or less) budget per mission. There are five base classes and five destinies (advanced classes).

Advancement is mission-focused – you get something new each time you complete a mission, and you unlock a destiny after 5 missions. You also unlock gear and cybernetics as you complete missions.

Each destiny offers a new set of talents or spells to choose from when you complete a mission.

I like how these work, as they’re optional menu extensions that could be attached to any of the classes. My one big concern is that a party can only have Allied status with one faction at a time, and only Friendly status with two factions at a time, so there are destiny, equipment, and cybernetic options getting locked out. You kind of need to be aware of what you’re giving up as you choose your missions.

I’m not going into the details of the other chapters, except to say that Skills is brief and to the point, and Equipment is real cool, y’all. In fairness, a cool equipment chapter and shopping list is a huge part of the draw of many cyberpunk games. Some of the effects are recognizable as specific 5e magic items, but the reskinning really works.

The Factions chapter strips faction advancement down to just three states – Nothing, Friendly, and Allied. You get a whole bunch of stuff for reach Friendly and Allied. You gain faction rating by completing faction objectives as well as the global mission objective. In addition to the boost to your standing with one faction, you lose points with the other two. Writing good faction objectives promises to be one of the core challenges of creating your own missions.

The book includes a starting adventure, which I’m not digging into in detail.

The last chapter is Monsters (and Other Less Monstrous but Equally Dangerous Approaches). There are a ton of cool ideas here, and they reveal an enormous amount about the setting that I didn’t catch from the rest of the book. My only real criticism of this chapter is that it goes without flavor text or art, trusting you to figure out where to go with the ideas.

I am seriously impressed with this book. My favorite part is the near-total absence of scaling, and the menu-option approach to gaining new features from your class and destiny. It works well here for the same reason it works well in Powered by the Apocalypse playbooks and 13th Age.

The weakest part for me is that cyberpunk probably calls for a few more rules around vehicle chases and deeper Hacking challenges. It’s not a dealbreaker. The second-weakest is the absence of monster art.

I strongly recommend picking this up and soaking up its fun ideas. As I write this, it’s still 25% off for DriveThruRPG’s Christmas in July sale! My gaming group would probably have a great time with a short-run Entromancy campaign.