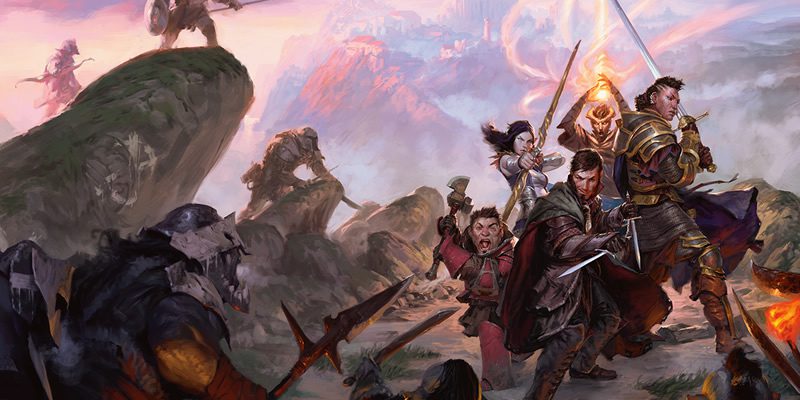 New year, new Unearthed Arcana – this time bringing us four new subclasses. We have the barbarian Path of the Beast, the monk Way of Mercy, the paladin Oath of the Watchers, and the warlock Noble Genie Patron. I am excited to dive into this! Just, uh, be aware that I will be throwing in some jokes along the way. The jokes don’t mean I don’t love this material – it’s not intended as mockery.

Barbarian: Path of the Beast

Too long have we labored under the burden of not knowing how to represent a certain Teen Titan in D&D! This is a shapeshifting barbarian, and I am particularly happy to see it because of a Twitter thread, uh, yesterday about how it was hard to bear not having a bear bearbearian.

Anyway, you don’t have one fixed Crinos form or anything, you just shapeshift with you rage.

Overall I like what I see here. I think I’m a little surprised that there’s not a defensive feature making some kind of change to your Unarmored Defense – thick hide or chitinous shell or whatever. It’s not a problem without that, but I think of the hide or shell as part of selling the shapeshifting.

These are healer monks, exploring sort of a Chinese medicine theme, offering healing and necrotic and poison damage. It’s a reasonable direction to go with ki, and if there’s any surprise, it’s that something like this didn’t come along sooner. A masked monk that is a master of life and death sounds incredible. I wouldn’t have thought to build a Renaissance plague doctor on the monk class, but that’s on offer.

Also, this is an amazing chassis to play a Star Wars: The Old Republic Imperial Agent, and y’all can probably guess that I am all about roguish healers. Finally, I haven’t played WoW since well before monks were a class, but I assume there are some (likely unintentional?) Mistwalker monk connections. Hie thee to the comments, monk healers.

Well, this subclass is very cool. Having no ranged healing and no raise dead powers, and with your lesser restoration waiting until 11th level, it’s still hard to play this as a primary or sole healer, but it’s not out of the question, either. I like that it has interesting damage output options as well as healing. In effect, Mercy has two parallel gameplay loops, and you really don’t want to use them both at the same time. The healing side is touch-cast, while the damage/poison side has an “any creature” damage aura. You can dart in, heal, and keep moving, but this will absolutely give one of your allies a bad day at some point.

Paladin Oath of the Watchers

This is the, uh, the Stan Lee character? Oathu the Watcher?

Anyway, this is a paladin Oath about protecting against various outsiders – the Feywild, the Far Realm, the Inner Planes, the Lower Planes. Leaving the Shadowfell off that list might be a little odd. The tough thing about this kind of Oath is that I don’t know that it outwardly distinguishes itself from Devotion. Inwardly, sure – you know that you’re heroically dedicated to fighting certain kinds of threats, rather than protection and purity in general. To implement this in a campaign, I’d want to pour an uncommon amount of energy into differentiating the orders these paladins serve.

I don’t expect people other than me to care about things like outward distinction, but I want to explain why I do. The PH and XGtE Oaths suggest their outward characterization to me: Devotion is High Chivalry – pennants snapping in the wind, Lancelot and Galahad all the way. Ancients is a Green Knight figure, Percival, and maybe Herne the Hunter if you like. Vengeance is a 4e avenger who discovered heavy armor and never looked back, or all of the tormented-soul knights. Oathbreaker and Conquest are both straight-up bad guys (please, no fascism apologias), much darker than Vengeance. Redemption a staff-bearing healer, maybe sort of a Jedi Consular. How does a Watcher paladin distinguish itself?

I’m not trying to tear it down, though you’d be forgiven for thinking so at this point. A little additional story support and characterization would be sufficient for me. I do appreciate the “no Diabolical Deals for you!” tenet, now that Descent into Avernus gave us such a lavish and cool description of same.

Okay, now that I’ve gotten to “these are paladins that went to wizard college,” I like everything I see here except Aura of the Sentinel. Writing good auras is hard because they are passive awesomeness, so I wouldn’t kick up a fuss if it survived to the final version. I can absolutely see these paladins as the Wardens of the White Council, especially for bringing down rogue Conjurers and warlocks. I… kind of wish something unusual went on with their armor, or absence thereof, to sell that crypto-wizard concept (if indeed that’s the concept).

Way back when I wrote the History of the Warlock series, I took a sidestep from it to also write the History of the Sha’ir (also check out Part Two). I mention this because, uh, this is doing sha’ir stuff in all but name. If you’re new around here and have only seen my breakdowns, I occasionally do big History of the Classes series. It’s a thing.

I mention this, of course, because this is a sha’ir-adjacent warlock, though it’s by no means a direct adaptation. For one thing, you cast spells immediately, rather than a few minutes from now when your gen search engine gets some responses back. What can I tell you, neither the internet nor search engines were all that fast in the 90s. For another, you don’t have unrestricted access to all spell lists.

This one doesn’t quite hang together for me. I want the vessel to matter in some greater way – as it is, it’s an appendage to the misty tether. The misty tether matters at 1st level, but it’s building the foundation of a playstyle that takes 10 levels to coalesce. I’d love to see the vessel hold a single spell borrowed from another class’s list (and more involved than just a long rest to change out), or something similarly reflecting and updating the 2e sha’ir. I also miss the thing where you could conjure lesser genies to aid you. Protective Wish, Genie’s Entertainment, and Collector’s Call are each cool things to have, but they don’t cement a playstyle or the Patron as a whole.

A shapeshifting barbarian is one of those concepts that definitely has community interest. It recalls some of the 4e warden, as well. Healer monks sound like something that should exist, once you say it out loud. A paladin who deals with the effects of reckless Conjurers and warlocks – well, that’s every paladin, but a specialist is still good to have. Sha’ir are a hard target to hit, and even if it’s not quite satisfying me yet, I desperately hope that it gets another 5e iteration.