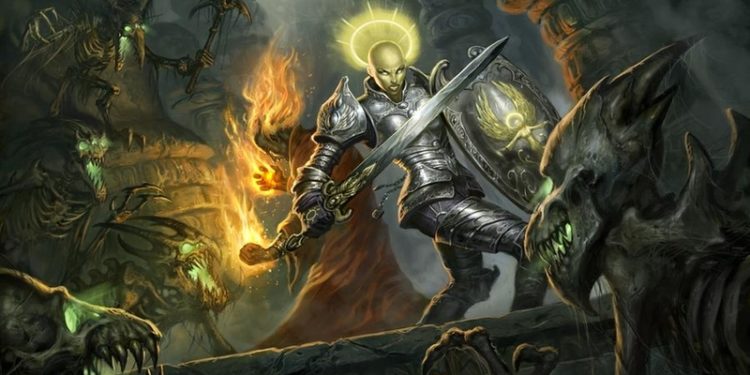 Aasimar are in many ways opposites to tiefling, but they share an important theme of being outsiders. While tieflings are branded by the actions of their ancestors, their lives are largely their own to live. Aasimar are not only marked by their divine heritage, but they are directed by angels to achieve some part of a divine plan.

This tension between free and divine will can form the center of your character’s struggle as you roleplay aasimar. While tieflings might seek redemption, aasimar may very well buck against the demands placed on them or fully embrace them and become living weapons for the divine. Roleplaying aasimar can encourage a push for balance between your mortal and immortal halves.

Aasimar are descendants from humans that have had some connection with the lawful good deities of Mount Celestia. They are born to serve as champions of the gods and their births are marked as a blessing.

The race guide for aasimar specifies that they are “placed” in the world. They are expected to “strike at evil, lead by example, and further the cause of justice.” This is where they are most distinct from tieflings.

Where tieflings may have some distant connection to the demon that spawned them, aasimar are actively placed into the world by the gods. They are born to serve a greater purpose. The dreams and visions they encounter as they age help to mold them into the champions that the gods intend them to be, and each one is given a specific celestial agent to guide them.

This creates a variety of roleplaying hooks for you as you build your background. Answer questions like:

It can also be fun to work with your DM to determine what threat the gods placed you here to face. Whether or not that knowledge is something your character has access to is up to your DM to decide, but an aasimar can be a great race to choose if you are in a campaign that involves epic struggles of good and evil.

You can also play an aasimar whose destiny is never really made clear, whose guide is largely unhelpful or so removed from the reality of the material plane that their advice is useless. And what happens if your aasimar would rather be a brewer than a champion of all that is Good and Holy™?

To Answer the Call of Heaven

What makes characters really shine is their relationships, and aasimar come pre-built with a relationship in the form of their guide.

Each aasimar – apart from the fallen – have an angelic guide that they can turn to for guidance. It is specified that this help comes in the form of dreams, visions, and prophecies. And the guide isn’t just any random angel, but a specific one with its own motivations, ideals, and agenda.

Work with your DM to craft this guide and explore how your aasimar relates to them. Are the visions more of an annoyance than anything, or are they welcomed? Do people turn to you, hoping your guide can answer their questions?

It is worth considering how people may react to you. Volo’s Guide mentions that many conceal their identities as the forces of evil are inevitably drawn to them eager for a chance to cut them down. How open are you with the party at the true extent of your divine heritage? Do they all know about your celestial powers, or do you hide it from some?

This also brings up an interesting point for a backstory hook in which your identity was betrayed, or you learned that the world is eager to destroy you. What happened that made you decide your life – which was celebrated at birth – must be one of concealment and hiding?

You can also work with your DM to flesh out the greater aasimar community. Are they divided based on what god placed them in the world or do they organize based on some larger divine plan? Is there enough to even form a community with its own cultural practices, or are aasimar largely isolated from one another?

Personal Desires versus the Greater Good

The central emotional conflict for aasimar comes from their divine imperative to Do Good and their own fallibility and mortal desires. This can lead to interesting questions you may be forced to answer, like can you fulfill your divine mission and have a family?

Unlike angels and gods, being good is a daily choice for mortals. This can wear on an aasimar as they live a life of constant battle against evil. What is the point, they may wonder, of all of this? Why was I forced to fight a war I have no stake in?

A kind of existential ennui could set in where the aasimar recognizes that the battle between good and evil is an eternal one and so no amount of progress, no great victory will truly end it. Some of these aasimar may become Fallen Aasimar.

Fallen aasimar are specified as turning to evil, but I think this may be a little simplistic. It’s not like every aasimar who questions their role in the divine plan decides to murder puppies for a living. Rather, those who deny their gods-appointed quest, who reject their divine heritage lose their divine light and have it replaced with shadow.

Playing a fallen aasimar in an epic campaign is possible. You could be more morally gray, or more out for yourself than trying to be a champion for good. A fallen aasimar is also a good pic for a redemption story, or perhaps a lot of fun in a campaign about mortals storming the heavens.

Questions to ask when creating an aasimar backstory

Consider these questions when developing your aasimar character: