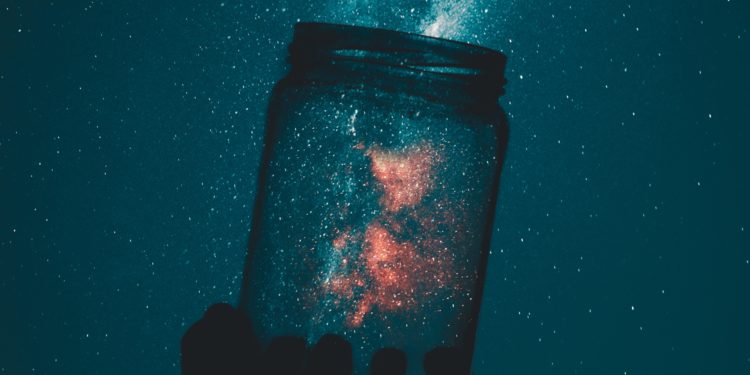 Magic items are a huge part of any Dungeons & Dragons game. Players love getting them. DMs love giving them. They are a more tangible reward from a party’s adventuring than a sack of gold coins ever could be.

Items such as a +1 longsword or Staff of Power provide a clear mechanical benefit, but what about magic items with less obvious uses? Those can be the best, most memorable kind. It’s a challenge for the players to think outside of the box – to take their resources and solve a problem in a way they never could have before.

The items don’t have to be legendary to make an impact. Below, are five “uncommon” magic items from the Dungeon Master’s Guide (listed in alphabetically order) that inspire creative game play. 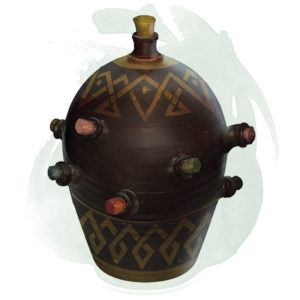 The Alchemy Jug (found on p. 150 DMG) is sure to cause laughs when the players realize what it can do. Once per day, it can create between an ounce to twelve gallons of a substance, depending on the liquid chosen from the ten options. I love that it doesn’t just stick with expected choices, like water and oil, but includes things like poison, honey, and (my favorite) mayonnaise. When are the players going to need 2 gallons of mayonnaise? No idea. But when they do, it will be a moment the entire table will never forget.

If you are familiar with the first campaign of Critical Role, you may remember that Grog had one of these, and frequently ate the entire jug of mayonnaise as a treat (YouTube clip here).

That’s the fun thing about this item. It can be practical or silly depending on how the players want to use it. If they’re stranded somewhere, then eight gallons of fresh water every day is extremely useful. What if they need some acid to burn through a locked door? Or beer to offer in trade with a warlord? 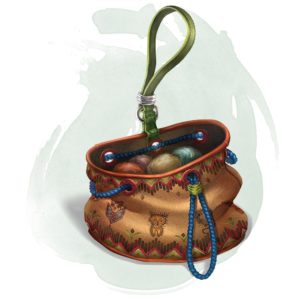 The Bag of Tricks (p. 154 DMG) must have been inspired by the classic magician gag of pulling a rabbit out of a hat. My bag is empty…ta-da! It’s a tiger!

There are three different versions of this item: a gray, a rust, and a tan bag. Each color has different animals that can be summoned. The tan bag has larger, more combat appropriate animals, the rust bag has a couple tiny creatures that could be used for scouting, and the gray bag is a mixture of both. However, one isn’t especially more powerful than the others.

Ultimately, it’s the DM’s preference which one is introduced into the game. Maybe it’s the bag that you have the most miniatures for or one that has more animals that mesh with your game’s theme. A fun way to introduce this item could be to have an opponent use it against the party.

This item is an especially great gift for an adventuring party that doesn’t already have an animal familiar. The animals could be used in combat but, depending on which animal is chosen, it could be more beneficial for them to provide Help actions or complete other tasks. A party without a rogue could send the animal ahead to check for traps without risking the party members’ health. An owl could fly up to grab an out of reach item. A mastiff could be a sentry for the party while they take a long rest.

The random nature can lead to hilarity or force the players to quickly re-think a plan. If they were counting on a brown bear and pull out a rat…that’s going to require some plan adjustments. The fact that these animals vanish at the next dawn or when they are killed provides the players with some guilt free fodder to throw at whatever problem they face.

Prank your veteran players by allowing the newbie at the table to find this magical deck of cards. Unlike a Deck of Many Things that can completely derail a campaign, a Deck of Illusions (p. 161 DMG) is a potentially powerful, but not game-breaking, item. A full deck has 34 cards, but most decks will have fewer. If you think this item is too powerful for the player’s current level, they could always find just a handful of cards – a remnant of an already used deck.

Besides the fact that they can’t interact physically with their surroundings, the illusions look, sound, smell, and act real (just like casting the major image spell). The creature doesn’t obey you, but, if it is a creature that normally speaks your language, you could converse with them. You could potentially even make a deal with them.

This can be used in so many situations. Need a distraction? An intimidation tactic? To make sure the next room doesn’t contain an ambush?

The cards are always drawn at random, so there’s a risk that the illusion created is not the one the player’s need. But that’s part of the fun. They’ll have to decide if it’s worth the risk. As they use more cards, they’ll narrow down the remaining options, which allows for further strategy. 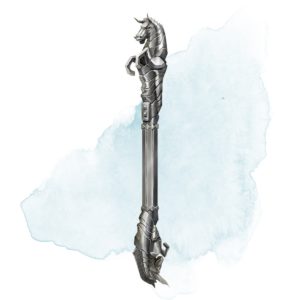 Such a simple item with such a huge amount of utility. The Immovable Rod (p. 175 DMG) can’t be moved from where you lock it into place – even if that place is in the middle of the air – without a DC 30 Strength check. Even with a successful Strength check, it will only move 10 feet. With a weight capacity of 8,000 pounds, the players are sure to devise some interesting uses for this item.

The more obvious uses include using it as a tool for climbing, barring a door, holding open a door or window, or supporting an unstable structure. However, the player’s have the opportunity to really get creative. As the DM, be prepared to adjudicate their shenanigans, and perhaps have an idea in mind of how much leeway you will allow with the rod.

For example, if the players are falling from a great distance and then use the rod to catch themselves, they would probably need to make some sort of Strength check to not have their arm wrenched from their shoulder. Or if they are attempting to jam the rod down a dragon’s throat, maybe they stop it from biting, but it can still use its breath weapon, or maybe that act causes them to lose the rod forever. 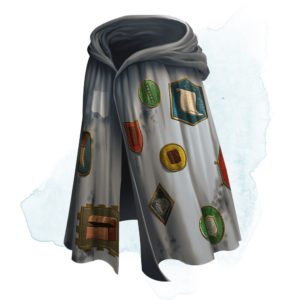 Last on this list, but certainly not least, is the Robe of Useful Items (p. 195 DMG). This robe is covered in patches that, when pulled off, transform into the object or creature the patch represents. The robe always has a collection of common adventuring gear items, such as a rope or a 10-foot pole. More valuable and unusual patches can also be on it. The number of additional patches is determined randomly by rolling 4d4. After that, the DM can either choose what those additional patches are or determine them at random using the d100 chart provided.

The lists include mostly mundane items, but there is also an iron door that conforms to any opening and bars itself, a pit that you can place on the ground, and a window that can be placed on a vertical surface. Those three patches alone could be the ingredients for some fun mischief. Even the more non-magical items could be used by creative players to great effect. Perhaps the party is in the middle of negotiating, and then the robe’s wearer rips off a patch and plops down a bag of 100gp to make sure the party gets what they want. Maybe a creature is getting away on foot, so the robe’s wearer uses the riding horse patch to give chase.

One of the nice things about this item from a game balance perspective is that it is self-limiting. There are only so many patches, and once they are used, the robe becomes non-magical. If you have a player really invested in this item, it could be fun to homebrew a mechanic to sew new patches onto the robe.

Giving your players a quirky item is a fantastic gift for the entire game. It encourages the players to think outside of the box to solve problems. As you can see from this list, even items that supposedly are less rare or less powerful than many others, can alter the entire trajectory of a game. With the right circumstances, player ingenuity, and DM flexibility, these items can spark your player’s creativity and create moments your group will never forget.