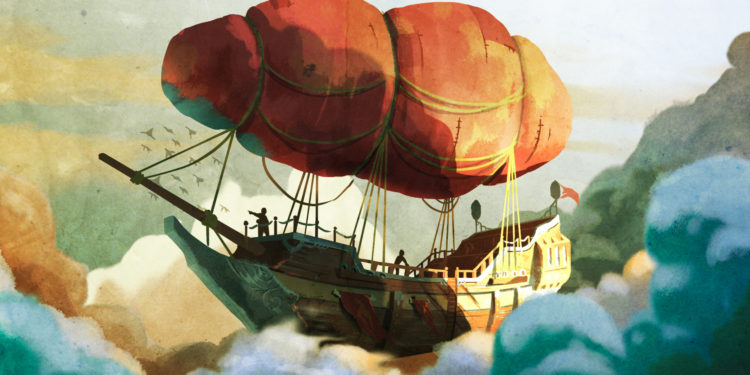 Setting: Agnostic
Location: Boat in the middle of the seas, or on an airship
Lvls: 5-10

The players find themselves traveling either on a boat or on an airship (I recommend the airship if you want to add some extra difficulty). The leader of the harpies‘ flock wears a headband of intellect stolen from a previously killed adventurer. This made her cunning and intelligent. That’s how she became with such a Machiavellian plan she and her flock use to easily annihilate people that go by their zone. The Player Characters are their next prey. 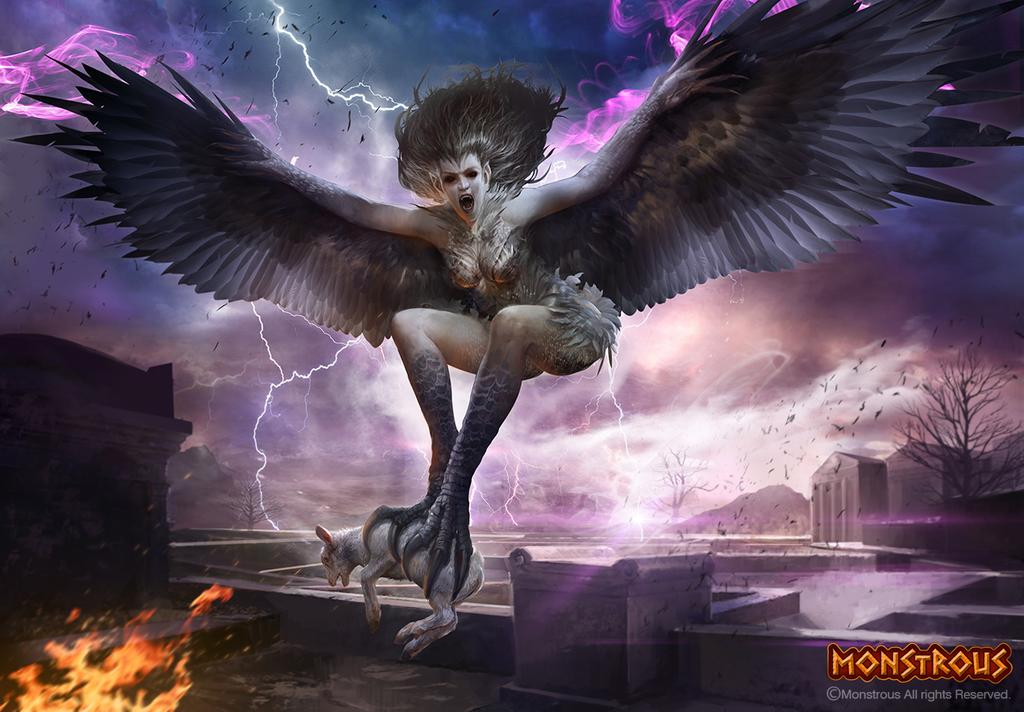 A harpy attack on board

As you continue sailing through the (seas/skies), a shadow comes out from the skies at an irrecognizable pace towards the mast. The shadow is cast behind the sails to not be easily recognized. It is hunched over it, forming a humanoid image.

In a matter of seconds, the shadow opens its arms showing great wings coming from under it

“Prepare to be boarded” is the last thing you hear before harpies start appearing, two from each side carrying cockroach-like orange creatures the size of a pony. 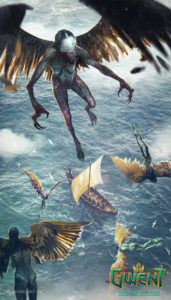 The encounter is made to work in a very similar way if you are on an airship or boat. One can easily tweak this encounter to work great for the 9-10th level group by having it occur in an airship as falling from it makes an enormous difference than falling from a regular ship.

The 5 harpies that arrive are carrying rust monsters. If the encounter is happening on a regular ship, the harpies just throw them on the deck. If, on the other hand, the PCs are on an airship, the harpies will leave them on whatever is making the ship fly: If it is a great balloon over the ship then give your rust monsters 20ft climbing speed and place them over it. The rust monsters are used to destroy the ship, not kill the adventurers. They may defend themselves if attacked, going for the player’s weapons, but these rust monsters were primarily trained to destroy the place they are left on. These are a special type of rust monsters, with the ability to rotten wood, and other surfaces with their antennae.

The players’ attention is divided: kill the rust monsters destroying the ship or go for the harpies? That’s when you make the 5 harpies start singing. A single DC11 Wisdom Saving Throw may be easy to succeed, but when confronted against 5 of them there’s a high chance either the player characters or those piloting the ship fall to their alluring songs. Of course, the winged monstrosities will do their best to make them fall off the ship removing them from the battle, while at the same time multiattacking those who succeed the save.

Just when everything is going terrible is when the shadow on the mast reveals herself: a harpy with a metal band on her forehead. This happens at the end of the first round. That’s when she will start singing as well. This particular harpy (the leader) has a separate stat block to make her a tougher and action-oriented monster (you don’t need to fully understand what an action-oriented monster is to play this encounter, but you can find more about it by checking out Matt Colvile’s video if you like). You can find the stat block for the Harpy Leader below.

As I stated earlier, the harpies’ primary intention is to get rid of everyone on the ship by making them fall overboard. The luring song is what they will be using for this. Chances are at least one important character (a PC, friendly NPC, or someone essential for the ship to keep going), falls for the Luring Song ability they have. If the harpies see a weak-looking (usually lacking in Strength) character, they will try to grapple them and throw them as well. All of this must happen while they remain flying, never to be in range of melee attackers.

If they start to notice they have no chance in winning the fight, they will take distance, only combating if the PCs try to get rid of the rust monsters. The rust monsters are their plan B in case they can’t manage to kill those sailing. This will cause PCs to divide their forces, or force them to make the hard decision of killing the rust monsters while the harpies kill those commanding the ships. Either way, the PCs are supposed to be doomed: the boat is destroyed, the PCs die, or the ones who know how to sail the ship die, leading the PCs to their inevitable deaths. The players are forced to juggle with all these variables in order to come victorious from the encounter.

Harpies, however, are particularly strange monsters. Just like cats, they like playing with their prays. Were they by themselves they would attack in a very disorganized fashion, but the fact that they are led by the intelligent harpy leader means they can act in a more strategic manner. Have the harpy leader signal who to attack next and the whole group charge at them. Once the character falls to 0hp one of the harpies will remain by the PC’s side whispering to them in order to make them furious and suffer in their deathbed. The harpies will not attack the dying creature, though. They enjoy seeing them fight to stay alive. If by any chance the PC gets a 20 on their death save, or is healed by an ally the harpy will make sure it falls again, sometimes readying their action in case this occurs. 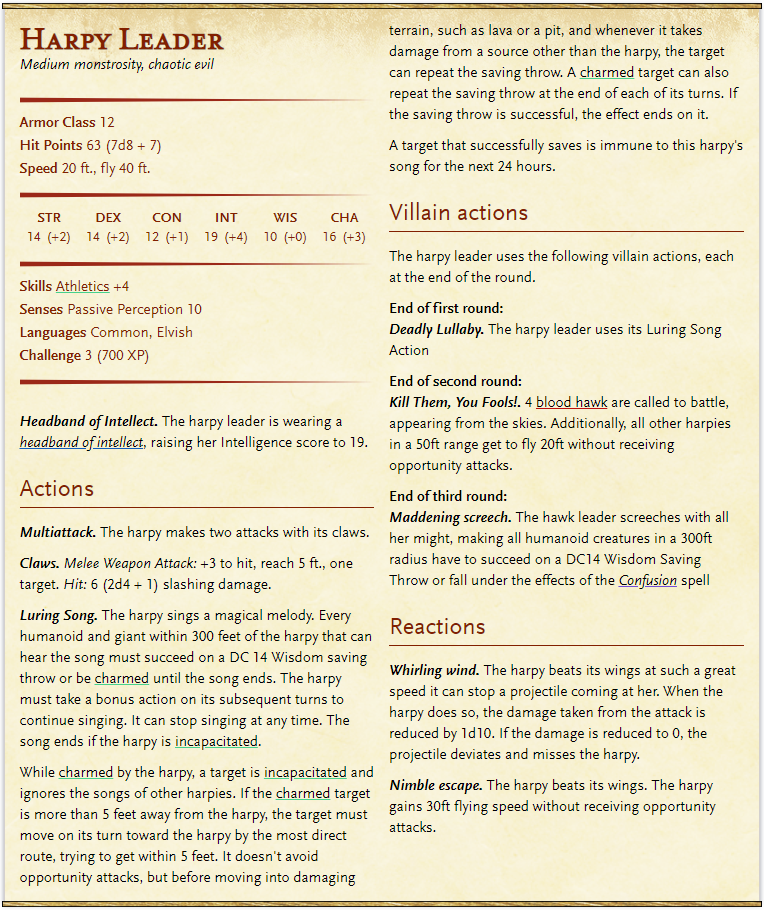 In order to make the players more options and let them feel awesome, we will add some things to the ship for them to use:

Rust monster damage to the ship

In order to abstract the amount of time the rust monsters take to fully destroy the vessel, we will make the vessel have 15 health points. For each rust monster alive breaking the ship, it will receive 1 damage. This means, that if all rust monsters are ignored for 3 entire rounds the vessel becomes fully inoperable (it sinks if it is a normal ship, or it starts to fall if it is an airship).

If the ship has multiple levels, making it impossible for the rust monsters to sink it by just destroying the deck, make them fall one level lower per round until they reach the bottom of the ship. Once there, they will continue to break it until it starts sinking.

The harpy leader is wearing a Headband of Intellect. Additionally, the ship crew will pay the PCs 150gp for saving their lives. If the ship is the players’ property, meaning that the crew is theirs, the PCs may be able to bring the harpies’ heads to some close town or city, who will pay them 150gp for getting rid of that ongoing menace that has annihilated many people and vessels.