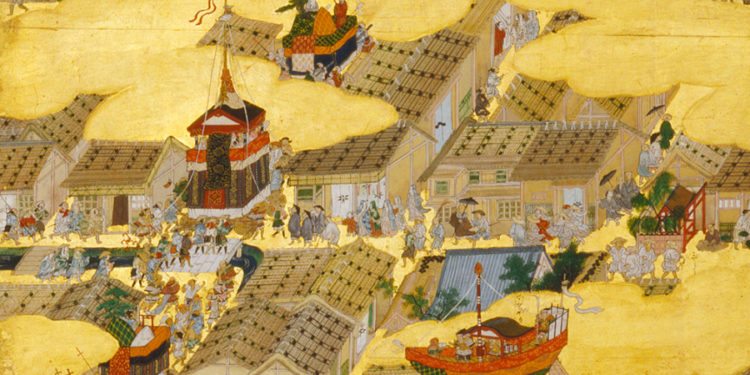 Welcome back to the world of STORM EDGE: THE ADVENTURES IN EIGHT ISLES! This week, we are getting into the brief primers on the culture, religions and various locations of The Eight Isles. If you want to know more on the history of this setting, see here (part1) and here (part2).

Yashima (or The Eight Isles) is the name of the archipelago nation in the far east edge of the world where an Angel Emperor rules, in name and in a spiritual sense, along with Shogun, who rule in all things of practical matter. Or rather they did until the Demonic War fractured the nation. Think Warring State Period Japan where various War Daimyos vied for control of the land while various foreign forces sought to influence the denizens. Except in this case, the foreign forces are not just coming from West, they are coming from other planes too. You see, The Eight Isles nation is in the precarious position of being closer to other planes of existence than anywhere else in this world and thus beings from other planes have had a history of visiting this land.

And some of these beings are revered as gods.

Thus, the people of The Eight Isles believe in Eight Million Gods, including great celestial beings, Dragons, Giants, Elementals, Fey-beings, and Totems as well as Demonic and dark forces, big and small. The god of river house (outhouse), for example, is a well-loved figure that protects your ass from Kappa, literally, while you are doing your business (there is more to that god, of course). Also, the Dragons and the Giants (as well as many other beings/things) are a little different in this world – more on that later. This has also mixed with the more philosophical religious ideas of The Natural Path and The Immortals. Then came the teaching of The Lotus Wheel, originating in the holy land of Tenjeek beyond the continental Dragon Empire. Many of the Deities of the land of Tenjeek are Celestials or Horned Giants. And lastly, in the far West you have the Sunset Lands of Paltagan and Orandia from which came the missionaries of the Word of Yelus, their savior. 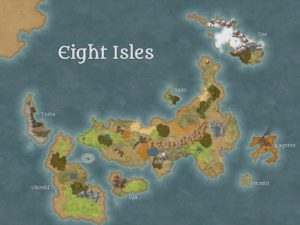 The Eight Isles refers to the following eight islands that make up the core of Yashima:

OZE is the northern most island with many great mountains where mainly Dwarfs live, underground, in a vast network of caves. Some say it connects to the plane of the Underdark where the Drow reside. The Drow who came aboveground to this land adapted to the climate and became Pallid Elves who practice a type of Druidic circle centered around the vermillion metals found deep within the mountain. It is said these magical metals are the brains of the great dragon whose body has become The Eight Isles. Many creatures of snow that are not seen in the Southern islands inhabit these lands as well.

AMATO is the biggest island, occupying the center of Yashima. It contains the most cities and has the most varied environment. It is also the most populous island and home mainly to Humans. However, all the other races of The Eight Isles can be found here as well, either living there or just traveling through. Most notably Half Elves and Half-Orcs. This is where the capital of Yashima is too, though it has been shrouded in mist and become a ruin where only the Imperial Palace remains intact, protected by its divine magic. Amato also has the tallest mountain in the lands, Mt. Fushi, where the Kirin that accompanied the first emperor have taken residence. A chain of tall mountains called The Spine run through this island and are said to be gateways to the Celestial planes.

SAGO is the little island just north of central Amato. This is where the Gnomes have made their home, in its woods and idyllic fields full of beautiful flowers. The Gnomes’ Tinkerers Guild headquarters is based here, with members of the guild spreading out throughout The Eight Isles. It is said that the green mountains here hold the portal to the Elemental Earth plane.

KAGUTSU is the claw shaped fiery volcanic island east of Amato where the Tieflings have made their residence. It is said there is a portal to the Elemental Fire plane within the volcano (and some say there may be many more infernal connections there as well). The HQ of the Five-Pointed Star Mage Society is here too. It is said the residences built within the volcanos are highly advanced and full of architectural wonder.

HINAMI is a jewel shaped island south of Kagutsu where many of the Dragonborn (Ryujin) reside. The island is made up of a massive cliff with many caves going down its middle, leading to a great waterfall. It is said there is a portal to the Elemental Water plane here. Many rare sea creatures live here from Tortles to Tritons to Sea Elves, and much more.  It has a separate ecosystem from the rest of the islands and is filled with natural magic.

IYA is the island between Amato and Ukushi. Halflings roam around its windy, expansive fields of grass (when they are not wandering across the rest of The Eight Isles). In the high mountains of the island the Aaracokras have made their residence. Sadly, neither the Halflings nor the Aaracokra can be really said to have a proper sense of home here. Rumor is that there are gateways to the Elemental Air planes here. There are also bands of Fey-Touched Halflings here, who claim to be descended from the Halflings returning from the Feywild to join Nigi-Midyus’ cause.

UKUSHI is the second largest island in The Eight Isles (though Dwarfs claim their island Oze is much bigger of course). Many kinds of Elves (High Elf, Wood Elf, and even the rarely seen Eladrin) have resided here for millennia, along with Firbolgs, horn-less descendants of giants who opted to tend to the new land instead of warring with the dragons. Full of lush wilderness (from emerald fields to pristine lakes to silver mountains to twilit marshes, and deep forest) Ukushi is commonly recognized as the most beautiful of the The Eight Isles. From time of legend, the island has had an intimate connection to the Feywild, more so than any of the other islands making up The Eight Isles.

TAIBA is a rocky island of dark mountains and beauty as tough and stark as the Orcs and Half-Orcs that took residence there.  In the mountains the descendants of horned giants live (Goliath). Oni that have retreated through the pathway to Shadowfell are rumored to exist beneath the mountains here. There in the dark stillness, they live with Shadar-Kais, biding their time. It is said when their Six Horned King and his Dark Prince awaken, the Horned Giants will return. 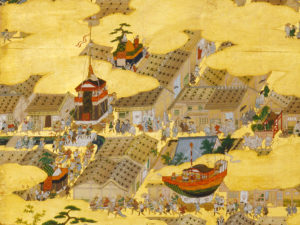 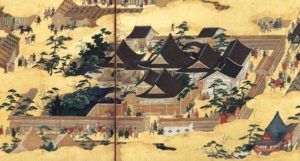 Notable Locations of The Eight Isles:

Keika: The official capital of The Eight Isles, Keika sits on the shores of Lake Nio. Modeled after the then capital of the Dragon Empire of the mainland continent, now ruined and overrun by demons after a decade of magical warfare. Still, Imperium operate from its secluded palace, keeping peace.

Asuka: The city south of Lake Nio where The Great Harmony was made. With Keika in disarray, this old city of Nobles and Lotus Wheel temples have once again come to function as a central city of The Eight Isles in this time of war, though their influence has waned greatly.

Sekito: The big Port City at the Western End of Amato. It’s the place where the Infant Emperor Anys-Nan, of Heiga bloodline, was drowned along with the mighty Storm Edge (which is said to be lost in Magato Whirlpool).

Namiwa: Port City at the south of Mt. Fushi where many powerful and rich merchants rule. Many Foreigners from the mainland continent and the Sunset Lands visit here.

Lake Nio: the mirror-like lake where the pact of Great Harmony was made.

Mount Fushi: The tallest Mountain of The Eight Isles and a dormant volcano. It is said that the Witch Queen still lives there with the Kirin that Nigi-Midayus rode on.

The Spine: The tall series of mountains in the center of Amato, said to be the gateway to the Celestial realms.

Magato whirlpool: always turbulent water between Amato, Iya and Ukushi. It is rumored that at night, otherworldly tentacles reach out and take fishermen to a plane of horror and madness.

Mt. Osore: The mountain at the north-end of Amato, close to the netherworld. Many mediums, who specialize in conveying the words of the dead, live there.

Lake Kushina: the big lake in Oze, also known as Eye of the Serpent. A great serpent-tailed Black Turtle is said to sleep at the bottom of its clear, frozen water.

Mt. Ake and Asana: The twin volcanos of Kagutsu, said to be the home of phoenixes and many fiery creatures.

Kagon Waterfall: the beautiful waterfall in the center of Hinami. Some say beyond its misty veils lies a land where ancient lizards of immense size live alongside dragons.

Nirai-Knai: The island far south of Ukushi where Humans originated from. A kingdom ruled by the descendants of the Immortal Sages.

Dune of Inban: Sandy hills on the northern coast of western Amato.

To find out more about the Races of The Eight Isles, click here.