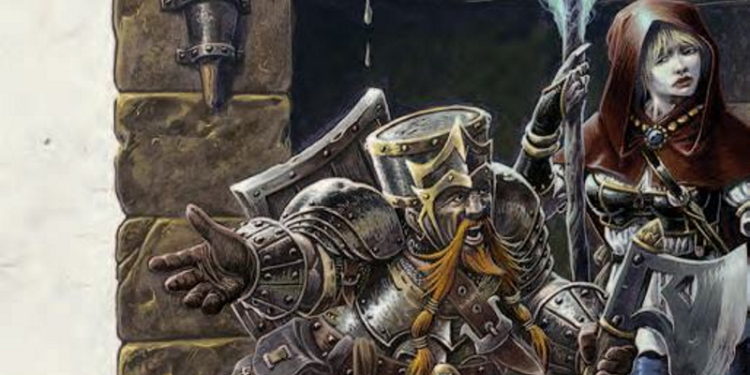 Of all the domains that have seen official support in 5e, there are a few ongoing, surprising gaps compared to the 3.5 list of domains and, for that matter, 4e builds. In this case – as if the title of the post didn’t give it away! – I’m talking about a domain of Earth or Stone. Nature, Forge, and Grave all touch on the edges of that general kind of idea, while leaving tons of open space. This article, originally posted in Harbinger of Doom, comes at the suggestion of the excellent Tim Baker. Hi, Tim!

Gods of earth and stone are often among the eldest of a pantheon, such as Gaia and Grumbar, or gods of towering mountain peaks, such as Skadi or Dunatis. Many gods of death, the underworld, treasure, or greed might also offer this domain to their more benevolent sects. The domain represents the soil, the power of stone, the strength of bedrock, and the whole of a planetary body. From the earth come green and growing things, precious metals and stones, and the materials of fortification.

When you choose this domain at 1st level, you gain proficiency in heavy armor, martial bludgeoning weapons, war picks, and mason’s tools. Your speed is not reduced by wearing heavy armor.

At 1st level, once per turn when you make a melee weapon attack using Strength, you can use Wisdom instead.

Starting at 2nd level, you can use your Channel Divinity to protect yourself and nearby allies.

As a bonus action, you strike a weapon you are holding against the ground, and a shield of obsidian rises to protect a creature. You or a creature touching the ground within 30 feet of you gains resistance to all damage until the start of your next turn. At the end of that duration, if you prevented any damage with this feature, the obsidian guard explodes. Creatures of your choice within 10 feet of the target must roll a Dexterity saving throw, taking 1d10 + your Wisdom modifier piercing damage on a failure.

Beginning at 6th level, while you are conscious, you can’t be moved or knocked prone against your will, except by an effect that teleports you.

Furthermore, when you hit a creature with an opportunity attack, its walking speed is halved until the start of your next turn.

Starting at 8th level, your weapon strikes land with the weight of mountains. Once on each of your turns when you hit a creature with a melee weapon attack, you can cause the attack to deal an additional 1d8 bludgeoning damage. When you reach 14th level, the extra damage increases to 2d8.

Beginning at 17th level, your connection to the earth and stone deepens.

Inner Strength is the weird and risky feature, but using Wisdom for weapon attacks is the specific thing that Tim and I really like about the 4e Earth domain, which appeared in Dragon Magazine #392. I’ve limited it to once per turn to put a pretty hard damper on a range of multiclassing exploits. I’m significantly inspired for this by Velendo of Calphas in the incredible Defenders of Daybreak Story Hour.

Obsidian Guard comes fairly directly from the Dragon Magazine article, though I’ve tweaked the effect a bit. Resistance + retaliation is intended to lead to cleric who can be the party’s tank – more than other clerics, I mean. For all the similarities to other melee-focused domains, my thought is that Order and War bring more of a warlord’s approach than a defender’s, and Forge doesn’t exactly cleave to any one party role.