A Guide to Roleplaying Tieflings 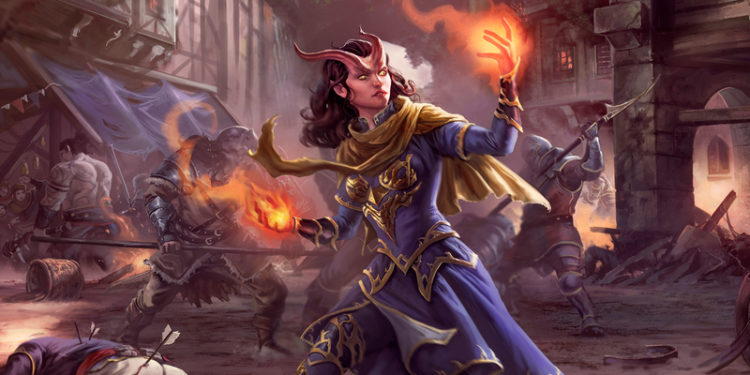 Speak of the devil, it’s time for tieflings! Unlike half-orcs, half-elves, or other outsider races, roleplaying tieflings means dealing with the fact that the corruption that manifests in their bodies as horns, tails, and other devilish features was a choice made by some ancestor.

Somewhere in their family tree, a direct ancestor thought it’d be a great idea to let a devil infuse them with their essence. Whether or not that ancestor was able to then use this new found power may not matter to you as a tiefling, but what does matter is how you relate to society and how you either try to fit in or carve out your own space.

Tieflings are not necessarily evil, though perhaps the societies they are born into push them towards an evil alignment out of the sheer necessity for survival. Tieflings primarily deal with themes that are present in a lot of western stories, from redemption stories to revenge narratives.

They have the same capacity for ambition and multi-generational planning as humans do, but their small numbers (according to official lore, nothing’s stopping you from having a whole tiefling nation) prevent them from being a much more powerful force in the cities and towns that they are found in.

Their social isolation demands self-reliance. A tiefling childhood is likely an unhappy one, but who is to say that the life of a thief is worse than the life of a courtier? It all depends on what your character values most.

As a tiefling, you are dealt a bad hand from the get-go. You have to navigate a world that is racist toward you, with people immediately suspicious of you at best and full of righteous hatred at worst. How does your character deal with that? What motivates them to make the best of their circumstances, or perhaps they want to change them?

Tieflings, and all outsiders, are perfect characters for those players who want to cause great change in the game world. Tieflings can make great revolutionaries and iconoclasts, in addition to making great villains or even player characters whose loyalties are uncertain until the party proves to them they are worthy of their trust.

Another place you can explore with your tiefling is a theme of self-acceptance. Perhaps your tiefling is motivated by the need to prove that they are different, that they are not corrupt. Or perhaps they want to cleanse their bloodline completely of the corruption in them. Whether or not that journey results in accepting the circumstances of their birth or changing them is up to you and your DM.

Legacy of the Damned

One key adventure hook that comes with any tiefling character is exploring what the pact was that cursed their family line. What did that ancestor give in exchange for the devil’s essence? Is the pact long completed and forgotten to time, or has the devil yet come to collect their due?

These questions are great starts for adventures involving a tiefling character. Even if they aren’t explored in your game, you can use these as fuel for your character in your backstory.

This could even be the foundation for your character’s personal quest or main motivation. They could be driven by a sense of justice, eager to right the wrongs committed by their ancestors and perhaps reach redemption. Or, they could want to complete the pact, eager to claim the power their ancestor was too weak to wield.

With the tiefling subrace variants, you get even more customization when it comes to exactly which devil your ancestors treated with! Each offers new palettes of colors with which to fill out your character.

The fiendish abilities offered by each bloodline can be used as a basis for the personality traits of your character if you wanted to incorporate them. Here are some roleplaying hooks for you to play with should you choose a subrace:

Standard tiefings as presented in the PHB, however, you can mix it up some and perhaps insist on having contracts signed before committing to anything. You could be a deal-maker, always trying to weigh the scales in your favor.

Those born of the Corruptor’s blood may have a predilection to corrupt those that they can, or at the very least transform them into whatever ideal that they hold most dear. Baalzebul uses minor sins to lead to deeper damnation, and your tiefling could do things similar to that, entrapping those around you in an ever-tightening web. That web could serve good or evil just as effectively.

Dispater’s tieflings come across to me as being naturally curious, a necessity for those who trade in secrets and information. This curiosity could even manifest as a fixation on exploration or a hunger for knowledge. They could be blabbermouths accidentally revealing things told to them in confidence at the worst possible times.

Those descended from Fierna are blessed with strong personalities and find that other’s wills are bendable and compliant when needed. They may indulge in the more physical and carnal pleasures of mortal existence or use their natural charm to secure themselves a luxurious lifestyle.

These natural criminals excel at infiltrations and heists. While you don’t necessarily have to play a rogue, children of Glasya may find the idea of breaking and entering more appealing than negotiations to get an item. They could even become detectives themselves. After all, who is better at catching a thief than a thief?

Levistus is the bargainer, offering terms for those who are desperate for any way out. As a child of Levistus, perhaps you think in terms of bargains and terms. You may offer mercy in exchange for service, thus gaining a powerful ally.

Money is the name of the game, and those tieflings descended from Mammon are masters at playing it. Your character could be the keeper of the party funds, fastidious and demanding about payments, loans (paid back in full with interest, of course), and haggling prices down wherever they can.

My personal favorite devil, Mephistopheles offers knowledge in exchange for souls. Tieflings linked to him may value knowledge above gold, perhaps even hoarding it. They may have a personal quest of wanting to acquire a secret piece of knowledge or even to learn something to outwit Mephistopheles and break the curse on their bloodline.

Those connected to Zariel are blessed with greater strength and the battlefield is their true home. They may find a kind of religious fulfillment in each battle, with the singing of steel against steel being their hymns. They may even have to try to control seething anger that always is boiling under the surface.

Questions For Your Backstory

For more guides to roleplay your favorite race, check them out here: elf, half-elf, half-orc, lizardfolk, human, dwarves, halflings, dragonborn, goblin, gnome. A new guide published each week. Comment with your favorite race and it might just be featured!