Queer Themes to Incorporate Into Your Campaign 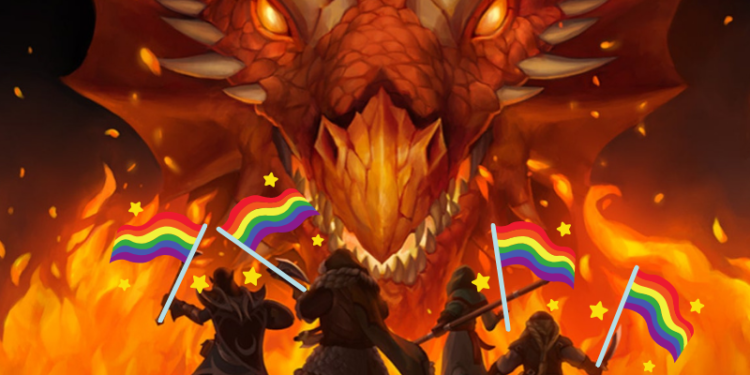 About a year ago, I wrote an article about how a DM could portray queer characters in their campaigns. Today I’m back again with another article exploring how to queer up your campaign by introducing queer themes into your campaign. We’ll be exploring themes that are almost universally part of the queer experience with a focus on positive narratives (there’s already plenty of stories out there about queer suffering).

However, that’s not to say that these themes don’t lend themselves well to narrative conflict. In fact, they are perfect playgrounds to have your players do some character growth and go on some awesome adventures. These themes also work across genres and aren’t only emotionally accessible to the LGBTQIA+ community, so that everyone, allies included, can get a rich TTRPG experience from the campaign.

What Makes a Theme Queer?

The way I’m defining a queer theme is by recognizing common life experiences, questions, or searches for meaning that are widely felt by members of the queer community. They’re in no way exclusive to that community but represent our struggles, hopes, and dreams.

Feel free to use these themes in your campaign whether or not you’re queer!

The search for who you are is a common one for many queer people. The act of coming out may require a lot of soul searching, self-discovery, and confrontation with parts of ourselves that we’ve been told are ugly or evil.

How we fit into a largely hetero society, how we relate to each other, and what it means to be queer are all central questions to anyone in the community. Our sexual identities are constantly evolving as people come to better understand themselves, or as new terms are created for people to be more precise about how they identify.

There is no wrong way to identify. These are cultural labels we create as humans to understand our experience. If someone identifies as three different genders by lunchtime, that’s perfectly acceptable. It’s delightful, even.

This is one that you can discuss with players during Session Zero. This can be a great arc for a player character to go through. A search for the self can take on many forms apart from sexuality.

A character with the noble background can discover that the courtly world they want to fit into is just not right for them. An illusionist wizard might find comfort in being able to change their appearance as it suits them. A monk may have deep inner turmoil about accepting a part of their order’s credo.

All of these offer opportunities for the player to inhabit the emotional world of the character and to make profound choices to shape the game.

The found family is the core of many queer people’s experiences. Many of us are rejected, sometimes violently, from those we are born to and so must create a new family. The reality for many queer people is that they must not only find themselves but also find a group of people who can witness them and love them for all that they are, good and bad.

An adventuring group is similar to that journey. Many player characters are wounded in some way. Many experience trauma through the course of an adventure, whether that is a mind-bending encounter with an Aboleth or the death of a comrade.

Provide opportunities for the group’s characters to bond by creating encounters in which they must put their trust in each other. Give them moral choices like go for the gold or save your party member. Draw on the character’s backstories to allow for moments of empathy.

The moments of downtime between adventures is a great opportunity to have this theme play.

Embracing Your True Self

Related to the search for self, and arguably the sequel to it is the embracing of your true self. The struggle to fully love yourself is one shared by many people, queer or hetero. Queer people experience a unique version of it as in some situations their true self has been suppressed either consciously or unconsciously in order to protect themselves. This is a part of the coming out process too, where some need time to fully process a part of themselves they’ve kept hidden or ignored.

This is another great character arc that you can incorporate into a longer running campaign. The journey from understanding who you are to accepting that person fully is a very long one. The journey is not always linear either. This theme can easily form the emotional core of any number of characters.

An aasimar might fully embrace that they are in fact a flawed mortal and not the heavenly scion of perfection they were told they were. A half-orc can take pride in both of their ancestries. A dwarf bard in the accomplishments they’ve made in song and music, despite it not being at the forge.

Much of modern queer identity has its origins in the struggle for equality. Still, the community struggles with issues of representation, equal rights and protections, internal racism, and more. A fight for justice may not be part of every queer person’s life, but we are all touched by the actions taken by our ancestors to make this world livable for us queers.

This one may be the easiest of them all to integrate into a campaign. Who doesn’t like a story about fighting off injustices (who often wear black cloaks and cackle)?

However, you can also take a more nuanced approach. Perhaps after overthrowing Lord Evilpants, the laws banning gnomes from entering the cities are still in effect. Or a group of peasants begins to revolt against the local lord forcing the party to see which cause is truly just. Like in the real world, there are likely no clear right answers here and part of the fun as a player is trying to wrestle with these absolutes like justice as they fail to conform to the chaos of reality.

I hope this article inspired you to add a bit of queerness to your campaign. Let me know what you thought of it in the comments below!