How to Make a Basic Conlang Part 4: Lexicon 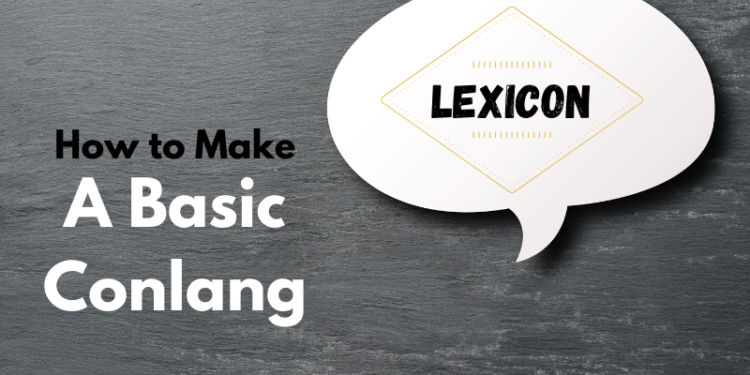 In our final article on how to create a basic constructed language, we’ll look at some ways to build your lexicon.

If you’re new to conlanging, we’ve covered how to choose what sounds to use, how to create a grammar for nouns, and for verbs. Check those articles out, or learn how to incorporate a conlang into your campaign setting.

What is a Lexicon?

A lexicon is defined in linguistics as “the complete set of meaningful units in a language.” Or, its all your words, affixes, or other bits you use in the language to create meaning.

I keep my lexicon in a google sheet, but you could do it in a word document, a scrap of paper, or your memory, but whatever you choose, make it organizable. I make a column for the conlang word in the latinization, its part of speech, the IPA, and then a definition.

But how do you translate words beyond a 1:1 of English?

Great question! Here is were your conlang will really blossom into its own, instead of living as a mere cipher of English.

How to Make Your Conlang Shine

When creating your lexicon keep foremost in your mind the people speaking it. Whether it is a clan of orcs from the high mountains of Grumblestank or peasants in a human kingdom, language is an expression of culture.

Start by creating some basic cultural metaphors that form the core of how spatial language is used to convey abstract information. The two basic metaphors to start with are Time & Emotions. Beyond these two, well the world is your oyster!

Time is something that we use spatial terms to describe. For example, we say that the past is behind us in English, but some cultures place it before you as it is the only thing you can see clearly. The future is behind you because you can never see it. We also say that time flows, that that is moves, and can do so quickly or slowly.

Start by creating a metaphoric map of the conceptual space. Where does the past lay? Where is the future? How does time get from one point in time to another? What are its metaphoric properties?

For our example lang, let’s go with time being like a river. The word for upstream can be used to mean the past, as the river of time is always pulling you downstream toward the future. See how we extended the meaning of those special terms to apply to time? You can do that with really any word, enriching and developing your lexicon.

We can make some phrases too. Perhaps people say that they feel stuck in an eddy to mean that time has slowed to a crawl and they’re bored or anticipating something. Maybe they call that sensation of time getting away from you as running the rapids, or falling down a waterfall.

Death could even be part of this metaphor and be euphemistically referred to as where the river meets the ocean. Maybe the halflings have to change boats from riverboats to ocean-going ones, and this too is used as a euphemism for death, like how we might say somebody “crossed over”.

Emotions are often located in the body. In English, love is in the heart, we have gut feelings, and we call somebody funny humorous (which originally meant an imbalance of humors in the body).

Where does your conlang’s culture place emotions? Do they reside in the body or do they take on other metaphors? Maybe orcs conceptualize their emotions as riding them or possessing them. Goblins might use the same word they use for the overseer to describe a powerful emotion taking hold.

So, now we have a lot of associations to create new expressions.

Being snowed on can mean feeling deep fear or paralysis from fear. Full of fire can be used to describe great anger, and someone blossoming like spring can mean they’re full of love.

Words used in these metaphors might over time become associated with the metaphor rather than the literal meaning so perhaps the old halfling word for to bloom hjoo became over time used only to describe somebody in love.

Other Ways to Generate New Words

The easiest way to create a set of new words is through derivation, a process in which new words are created from a basic stem. You can use verbs or nouns for it and its often best to develop multiple strategies for creating new words so that you have a little variety apart from just giving everything a suffix. Check out the Wikipedia article linked above for even more examples.

You also want to think about where the derivational method came from. Most of the time its evolved over time as a word is used repetitively to mean the same thing and is “bleached” or narrows in meaning and reduced in sound until its just an affix or particle instead of a word with a big set of meanings.

In English, the suffix -ly as in, thankful-ly, is used to create adverbs, It originated as the word lich in Old English and meant body. So when added to adjectives it described how an action was done. So, to illustrate quick-ly is saying somebody did something with a quick body. See how the metaphor works there?

Here are some basic derivational methods that can come in handy (these first two categories are broad versions of the more specific methods that follow,):

Let’s use the stem hjyst “eat” and kant “river” to create some nominalizations.

Keep going and soon you’ll have a great start to a full and vibrant lexicon.

This ends our short series on conlangs. If you have any questions please leave them in the comments!

Using Tattoos in your game, P2

NeverEnding: Level Up Your Story