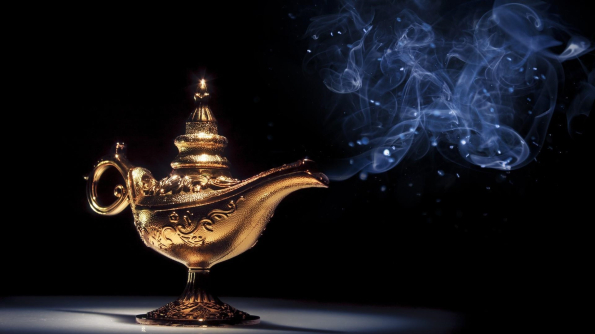 Amani Baba (she/they) is the leader of a thieves’ group that roam the desert in search of treasures. Many times have the nobles’ carriages been ransacked by them. However, what really interests Amani the most are the legends saying that tell of hidden treasures and powerful beings that can be bound to serve you. When she and the other thieves managed to defeat an adventuring party, they found out that the adventurers were carrying a strange map leading to a secret oasis.

The Star Oasis is in the middle of the desert with a single palm tree to mark its location, some rocks, and a star-shaped water pond. This oasis has been enchanted with magic to only appear once every ten years for a day. 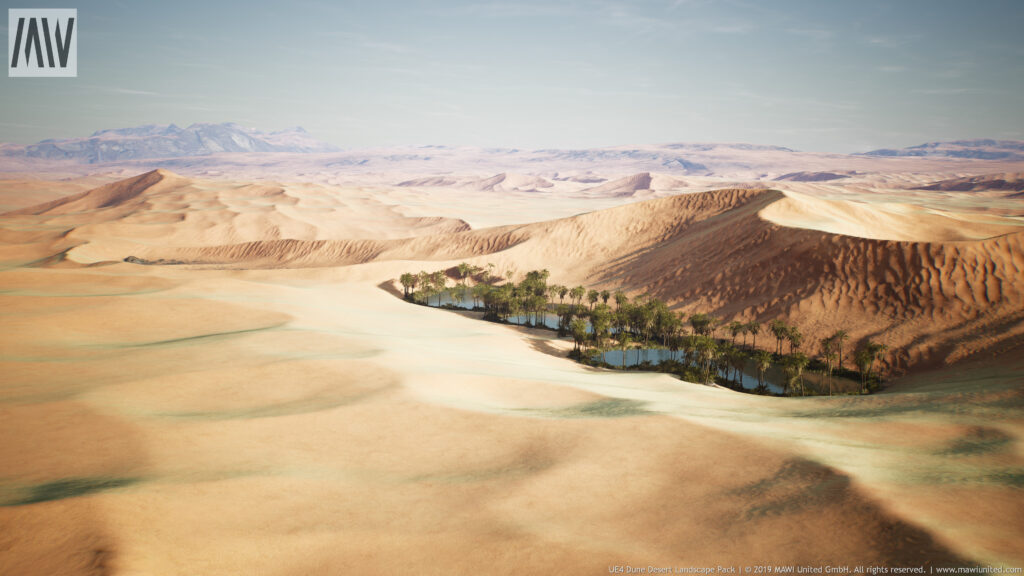 Amani Baba and the ten thieves

The players can randomly find the Oasis or be informed in the following ways:

Depending on the amount of time the player characters take to get to the oasis they may arrive during the day or during the night. The Star Oasis is a day away from the nearest town.

Water pool: The water pool is 10ft deep and has some fishes swimming in it, as well as a tiefling skull on top of a jade elephant statuette valued 400gp
Secret Entrance: The secret entrance is made out of thick sandstone. It has AC20 and 60hp. A detect magic spell tells you that the secret entrance was modified with transmutation magic to be made even harder to break.
Bush: A DC14 Intelligence (Herbalist kit) or Wisdom (Herbalist kit) check shows this is an extremely weird kind of herb growing from the bush, possibly with excellent medicinal use. A DC17 Intelligence (Herbalist kit) or Wisdom (Herbalist kit) indicates this herb can revive a fallen humanoid with the same effects to the revivify spell. The bush has enough herbs for 3 uses.
Thieves: The 10 thieves are from a great variety of races, from halflings to dwarves and elves. They all are wearing light clothing and bandanas. They use the bandit stat block. Amani (she/they) dresses in a similar manner. Their skin is tanned and has a long ponytail coming from the highest section of their brown hair that comes below their back, only to be braided near the end. She uses the thug stat block.

If the player characters arrive at night time, it’s going to be 10 minutes til midnight. It was only Amani Baba who heard from the legends that the oasis disappears at midnight. Thus, she is planning to get this over as quickly as possible. Amani and 10 thieves came with 10 barrels full of dynamite to explode a secret entrance to a hidden room where a brass lamp lies. 4 barrels are placed on top of the secret entrance, while the other 4 are by the side in case they need more explosive power. A weird bush is planted near the palm tree as well, with very peculiar leaves.

Light: The oasis is only lighted by a torch being held by one of the bandits. The area is otherwise dimly lit from the moonlight.
Dynamite barrels: Dealing 1 fire damage to a barrel causes it to explode in a 10ft radius. All creatures in the radius must make a DC14 Dexterity Saving Throw or take 3d6 fire damage. On a success, the creature takes half the damage. Note that barrels may explode other near barrels, and if many explode at once, near creatures may take damage from more than one at once.
Reasoning with the thieves: Having heard great stories from the lamp, Amani lets player characters work with them with a DC14 Charisma (Persuasion) or Charisma (Intimidation) check. Failing means Amani doesn’t trust the player characters and asks them kindly to leave, resorting to violence if necessary. She will not share their knowledge of the place, and will have the thieves attack the player characters as soon as they find the treasures beneath. Amani surrenders when only 3 other thieves and them are left alive, pleading the player characters to just leave them the lamp.

Combat against the thieves is done in different phases, as some thieves will be positioning the barrels by the time combat begins. This means that 4 bandits will be by the barrels while the first 4 bandits attack. The other 4 bandits arrive by Initiative 20 of the next round, with Amani and the last bandit joining the fight on the last one.

Adjusting the encounter: If the PCs are level 3 or lower, have Amani Baba use the bandit captain stat block. Additionally, if the PCs are at lvl 1 or 2, have 3 thieves already dead from an accidental explosion by the time they arrive.

If the player characters arrive at day time, it’s going to be 10 minutes til midday. It was only Amani Baba who heard from the legends that the oasis disappears at midday. Amani and their bandits are at the time fighting against a marid coming out from a brass lamp. The marid has deceived one of the thieves into accidentally wishing for a hat and now refuses to grant another wish. There’s a hole on the floor near the star-shaped water pool, as well as a palm tree and a bush with very peculiar leaves near it. Amani is shouting for help, saying “this water creature”  came out of nowhere and started attacking them as they were traveling. A DC13 Wisdom (Insight) check indicates she is lying.

Light: The oasis is fully lit by sunlight.
Wind. A strong wind is going on in the area, making all ranged weapon attacks to be made at disadvantage.
Broken secret entrance: The secret entrance was exploded with dynamite and is now a 10x10ft hole in the ground that leads to a room of the same size 20ft below.
Allying with the thieves: Amani will deeply thank the PCs for thanking them defeat the marid. She will then tell the PCs that she will leave all treasure behind as a thank you, only leaving with the lamp. Confronting her has she order the thieves to attack.
Allying with the marid: The marid is confused about why the PCs helped him, casts tongues on himself, and proceeds to say while chuckling that the thieves “fell for the oldest trick in the book”. He proceeds to tell the PCs that he will grant one wish for them with no tricks as a matter of thanks. After granting them the wish, he will tell the PCs to leave him again in the oasis if they don’t want to meet his wrath. Disobeying him makes the marid restore his full hit points and start combat against them.