3 Halloween-themed magic items for your players 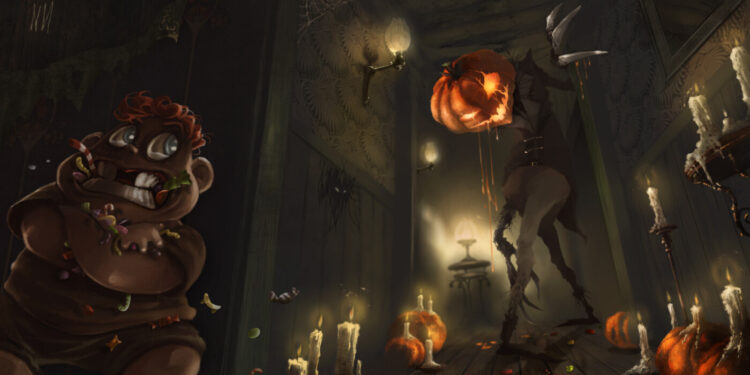 This next Thursday it’s going to be 2 years since I started working for Tribality. As a way of celebrating it, I wanted to do something different. Taking into account that Halloween is right around the corner, why not create something for players for once? Magic items it is! However, I wanted to give them my own twist to this, thus not only making the magic items Halloween related but also creating those monsters for the DMs to use (as well as some backstory and story hooks) that wield them for the players to confront. The monsters will be shown and described in next week’s article!

Being these spooky items, they work best when wielded by the villains of your campaign or Halloween one-shot.  I created some enemies worthy enough to wield them (CLICK HERE), but feel free to give them to other villains if you like or drop them in a treasure hoard. Of course, it’s going to be the players who will have their grasp on them after defeating the villain, so this serves both as a gift for DMs and players.

When you attack a creature with this weapon and roll a 20 on the attack roll, that target must succeed on a DC13 Constitution Saving Throw or fall unconscious for 1 minute.

Spearfish’s Fang is a blue pike with many spikes on its end to suck the blood off their targets, as well as barnacles covering most parts of it. The pike is considered a +3 weapon. When you attack a creature with this weapon you may decide to give part of your blood to let the vampire living within the weapon empower your attack.  When you do so, you roll 7 (2d6) and take an amount of damage equal to the result. By doing so, the pike drains the blood out of the wielder, deals an additional 2d10 necrotic damage to its target, and forces the target to succeed on a DC 14 Wisdom saving throw or be frightened for 1 minute. The target can repeat the saving throw at the end of each of its turns, ending the effect on itself on a success.

Spearfish’s fang is a sentient weapon, with the undead spirit of a vampire living within it. The vampire’s name is Blazhaar (she/her), a Lawful Evil vampire who used to be a pirate and demands periodically for blood to sate her thirst.

Once per day, the wielder may awaken 2 trees in a 30ft radius as an action for an hour, which will use the treant stat block and follow the wielder’s command. The treants look like a deceased version of the animated tree and have half the number of hit dice: 72 (6d12 + 30). The eternal wails of the trees’ spirits turned into treants can constantly be heard when in proximity to the orb.

My original plan was to have Halloween encounters so you can choose one of them and drop it in your Halloween one-shot, or as a spooky side mission for your campaign. However, I wanted the enemies to feel more special and terrifying. In order to do that, not only did I need to give some special ability to the monsters, but also scary-looking weapons that your players will want to loot. That’s why there are no utility magic items (though I’ve got some planned for some future article).

As always, the most scary-looking weapons come from your players’ imagination. Use the details I gave you in the weapons and add some descriptions of your own to make them even scarier. However, make sure to leave enough space for the players to fill in the blanks with what they consider cool and terrifying.

If you are looking for more Halloween oriented things I created for you to drop in your games, why not check out the Stranger Things’ demogorgons as monster stat blocks I created a while back? CLICK HERE

Save Your Campaign from the Holidays