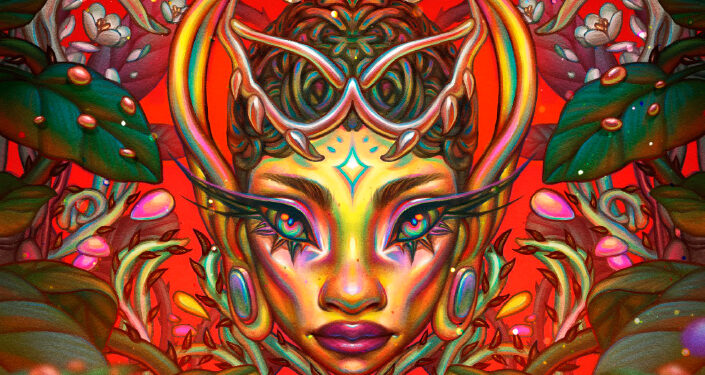 Another issue of Arcadia has arrived! This time with 3 interesting new things. As far as the people at MCDM said, from now on we are only receiving three new contents per issue. I’m fine with that. With this level of quality that is more than enough!

This issue started with a “Letter from the Editor” again (this being James Introcaso), in which, as he promised, talked mostly about the art from this and the previous issue. It’s always great to see some love for the artists as well. They have done an amazing job with this issue as well. For instance, the cover is outstanding.

Before I start, I wanted to talk primarily about two things: First of all, I wanted to thank James for granting Tribality with this early copy of Arcadia for us to talk about. I was already a patron of MCDM, but it’s a very nice gesture on his part to give us an early copy nonetheless. Hopefully, this means I will be able to have a breakdown of Arcadia for you as soon as each issue drops. Secondly, I tried again to read this issue with the free NVDA screen reader and again I got the same results I had in the first one. I’ll make sure to talk with the people at MCDM to let them know about this. When possible, we should try to make this kind of stuff available for everybody, and it’s a shame it still isn’t fully accessible.

On another note, all maps and handouts are available at the end of the issue again in a great number of formats, making it extremely easy for both DMs and players that play digitally or physically to make use of this content.

Here we are introduced with 4 new subclasses for the following classes, respectively: Wizard, Bard, Sorcerer, Warlock. For some reason, once you finish the introduction, there is no further mention of what these subclasses are for. I could guess from their names and mechanics, but people who don’t will feel obligated to go back to the introduction and find where in the text it says which subclass is for which class. I found that weird, as it isn’t that difficult to add below each respective subclass title which classes they are for. Nevertheless, I’m just nitpicking, let’s jump to the important stuff:

This wizard looks to be one that needs less time to sleep, takes more advantage of hit dice, and is tankier than the rest. It gives an additional use to hit dice as well as an additional hit die, which is something we don’t see enough in the game. I personally like it, but it starts to cross a bit into the sorcery points area, and I don’t think some people are going to enjoy that. It even has an option to increase the damage of spells, which is something I wish sorcerers had as a metamagic option (and may even be a bit OP, but I can’t be sure without testing it first).

This wizard also has some features that work as long as you have 3 spell slots remaining. At first, they are a nice bonus, but as you keep progressing, it ends up becoming pretty much a constant passive trait. It is weird for wizards to expend all their spell slots before they have a long rest once they have crossed Tier 1. This gives them a constant healing feature once they get lower than half their max hit points. It’s weird for a wizard that is ranged to get traits that heal them. Wizards shouldn’t take damage and are usually considered “glass cannon“. Its last ability is a bit weird (maybe it needs correcting?) because it allows the wizard to push creatures with their spells an equal amount to the number of hit dice they decide to spend. This would mean that if you are playing using a grid you need to expend 5 hit dice to push someone ONE square.

This bard seemed pretty basic to me. It is a bard that is both focused on healing and dealing damage, giving you cure wounds for free. When they deal damage, they can also heal as a bonus action (only with cure wounds) until the end of their next turn. Their bardic inspirations allow allies to reroll saving throws that would remove an effect. So, if someone failed the saving throw for hold person, you can give that PC a bardic inspiration to let them try again. Lastly, when a creature dies, you can use a reaction to regain a Bardic Inspiration.

Child of the sun Bloodline

A sorcerer subclass very connected with the sun and warmth. They can cast light for free and choose who can see it. This is great for dungeondelving so enemies don’t spot you as soon as you come from around the corner. Additionally, this light can explode blinding enemies. These sorcerers end up being resistant to radiant damage, and once they are powerful enough, they gain blindsight and can direct spells towards enemies that are completely out of sight.

Flavorwise, this warlock subclass seems like the most interesting. I don’t really know how much it captures the season aspect, but the fact this grants the warlock the chance to be somehow a mix with a ranger is very interesting to see. This subclass gives you eldritch blast for free, which looks like an arrow when you cast it. You can even use a bow if you want to as an arcane focus. The concept seems really cool in my head, and I would love to try it out. Moreover, it can leave traps as an action in a certain range, which leaves enemies weak and slow to be easily hunted down. The more you hunt, the more your warlock recompensates you.

All in all, it is definitely the warlock subclass I enjoyed the most and the rest left me thinking they were either too powerful or a bit dull. What’s more, I don’t find much of the flavor that it is supposed to have with the seasons in their abilities. These things are usually very playtested by the folk at MCDM, so I might be entirely wrong, and they can be just what you are looking for.

This one feels like a really smart addition. It seems quite a bit of investigation was put into it. The art for the monsters is amazing and feels unique. Their stat blocks are separated into a different page from their art making it extremely easy to take a screen capture and print it.

These elementals are made from other elements from the periodic table and are a combination of the usual 4 elements (water, fire, earth, air). This also comes with a short story on how these elementals came to exist that you can use for your own game, with an interesting NPC as their creator.

You have got a monster made out of metals like lithium and potassium, another one made from conductive metals, one that is basically living lightning that continually grows in size, and a conglomeration of numerous deadly gasses. Mechanically, they have all got something that makes them special and different from the official monsters. However, being CR4 – 7 the limit to the things they can do has me wanting them to be more awesome. This is then fixed with the alternate rules they added that I’ll talk about in a bit.

Personally, the ideas and the mechanics put into them are enough for me to want to add them in my game sometime soon. As this was not enough, they are all malleable in some way, meaning they can move through very tight spaces and occupy the same place as a PC, which is always fun to describe as I see the face of my players turn into plain terror. If I had to choose a favorite, I would go with the gaseous Noxa, a monster that is invisible but extremely lethal, which can be seen by dealing lightning or fire damage to it. This forces the players to think outside the box to kill the invisible creature, which is something that’s always encouraged from my part. You can take a look at it below.

This section from Arcadia provides us with some extra rules to make combat encounters against these elementals more interesting. It primarily talks about how the elements aren’t “rivals” (water kills fire, earth kills water…), they actually depend on each other. Thus, these alternate rules add 2 new things you can take into consideration: State Changes and Reactivities. 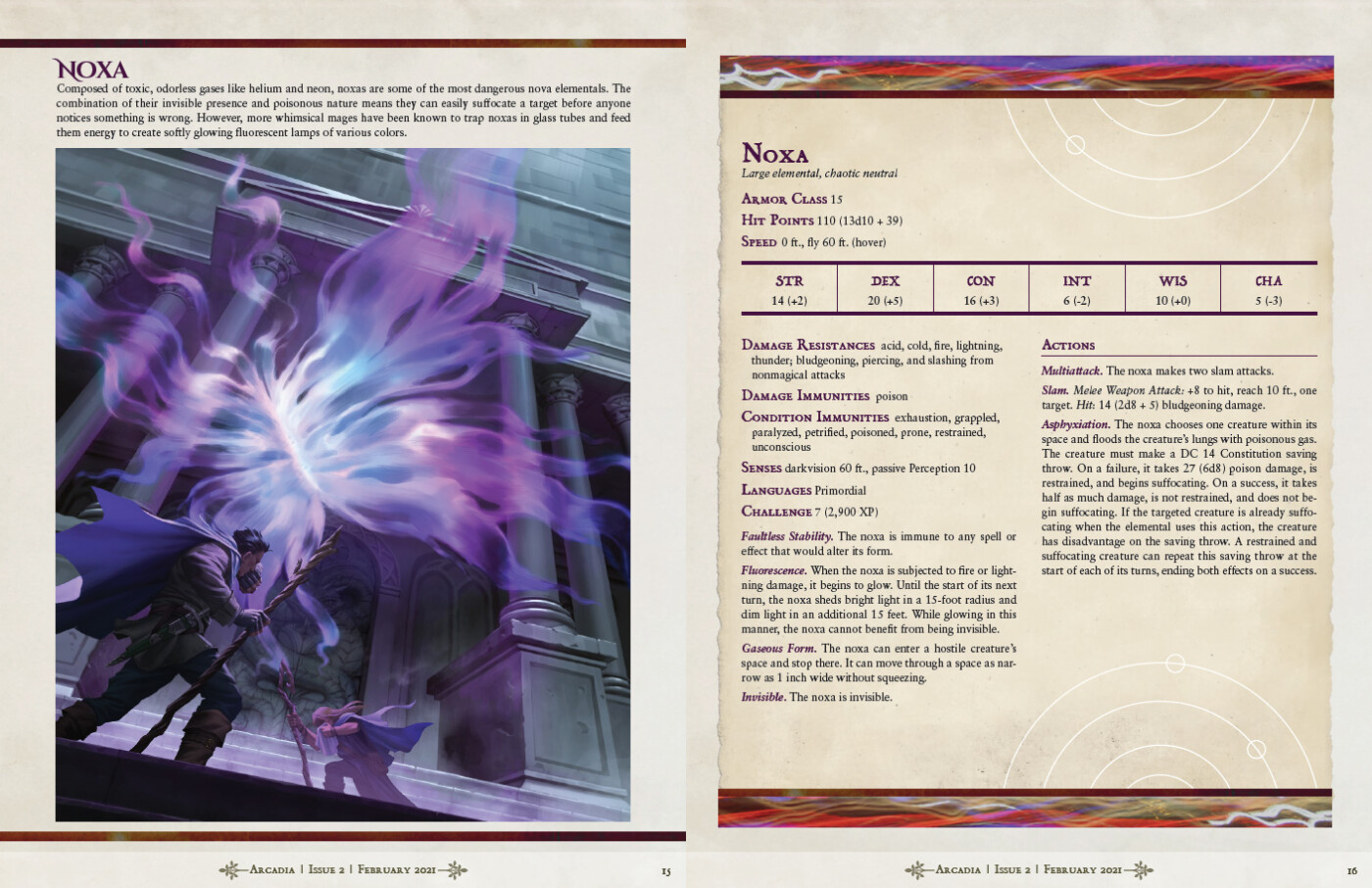 Well of the Lost Gods is a short one-shot adventure set by the side of a mountain, in which you discover a well that leads to an ancient civilization. In some ways, it is similar to the free one-page adventure I published last month. However, this one is about an ancient civilization with access to weird technology.  I personally love when sci-fi and fantasy collide to make an adventure of this style. Let’s talk about it while spoiling as little as possible about it.

This adventure is made to be played with a lvl8 party. The adventurers arrive at a town home to many weird anomalies. The people in there send them to investigate a weird artifact that was found near a mountain. Following the story thread one puzzle later, the PCs are found entering a cave that seems to be affected by weird magic. The adventurers need to solve what is going on, solve the problem and report back with answers. 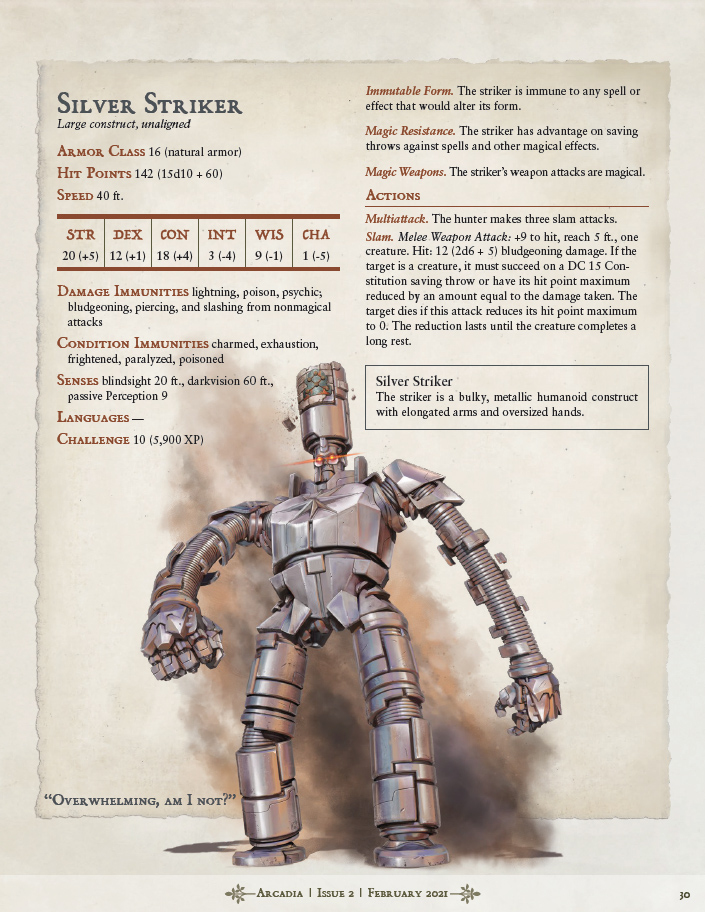 This isn’t even the boss monster

Seems like a normal adventure… However, Rich was smart enough to add a time limit to this. Another anomaly occurs and the players need to accomplish the mission before many innocent townsfolk get hurt or die. Even though it just puts a 24 hours clock over the players’ heads, this creates a sense of urgency, having them think twice before they take a rest. The players know not at any time how much time they have before they fail, so they are forced to move quickly. This is a very smart move!

Would I use this adventure in my games? I probably would. The adventure states some possible backstory but leaves it open enough for you to adapt the dungeon to fit your story. It even encourages you to do so! Even if I don’t put this in my campaign I’ll surely end up DMing it for a one-shot. The boss battle seems very fun to run as well!

In conclusion, this seems to be a great second issue, and it doesn’t even seem to be dropping in quality. I must say I preferred the content from the first issue, but this one here has very awesome folk working on it and their work here will surely end up in some way or another in my games. I hope to see more of this great stuff in future issues, and I’m excited for more people to get to participate in this!

Queer Themes to Incorporate Into Your Campaign

Van Richten’s Guide to Ravenloft is the ...