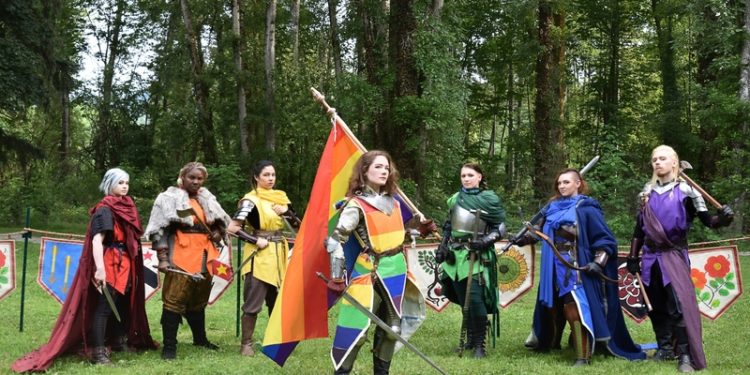 I’ve been wanting to write this guide for a while, but I never quite knew where to begin it. I was often the only gay man at the table when I’d sit down with friends to play some D&D or Star Wars or Scion. It felt like the weight of responsibility to represent my community was on me.

Often in games, my character was the only gay one. Although that didn’t stop me from flirting with every handsome barkeep, blacksmith, knight, guard, priest, king, prince, peasant, dragon… erm… What? I was playing a bard!

Even though some of these characters were receptive to my advances, there was a distinct lack of “queerness” to the world. It’s hard for me to put into writing just what being queer is like – and being queer such a different experience for every person in the LGBTQ+ community as our community is inherently intersectional. People of all ethnicities, economic backgrounds, religions, beliefs, and more compose the community, so this guide will be incomplete due to the limitations of my experience as a white, cis, gay man.

However, this guide is meant for allies who want to incorporate more queer characters into their game or have a queer-identifying player at the table. Hopefully, this can at the very least spark a conversation in the group about including our queer siblings more into our fantasy worlds.

What does Queer mean?

The LGBTQ+ community is a little notorious for all our different self-appellations and changing labels. Queer is being used here as the umbrella term (which is not without controversy) for the LGBTQ+ community. I personally prefer it as a label as it has the potential to encompass a variety of sexualities and gender expressions without excluding others, which is the problem with just using “gay”.

A word to the wise: The use of “queer” has a long history of being thrown at us as a slur. It is a sensitive topic to some members of the LGBTQ+ community, so if you’re unsure how to refer to the community, feel free to use LGBTQ+ or simply ask what the person you’re talking to prefers.

Queer is also a term that goes beyond binaries and encourages an exploration of the margins of culture. Queer people have been regularly pushed to the edges in western culture and in those “outlands” have created unique art, culture, language, and frameworks for understanding who we are and our place in the world.

Academically, queer is broadly used to indicate “the study of literature, discourse, academic fields, and other social and cultural areas from a non-heteronormative perspective.”

Most allies may have to work a little to shift their perspective from their default, but we’re playing tabletop roleplaying games! If you can pretend to be a 12-foot hill giant or a bespeckled gnome warlock who regularly communes with Asmodeus, then this should be cake.

So now that we are clear on queer, let’s discuss why diversity is important even for those tables that have no LGBTQ+ people present. Here are the top reasons why you as a player and a DM should encourage diversity at the table:

The World Is Diverse

Our world – the real one, that is – is naturally full of incredible diversity. We have so many beautiful and vibrant expressions of culture, self-identity, values, and our hopes for the future. That diversity should be reflected in your games.

You can bring this diversity to non-human races in your games, which often suffer from being painted with one cultural brush. Doing so enhances the verisimilitude of the world, and gives players a sense that they are participating in a living world. It also offers you great places to world build. How do elves express their sexuality? How does gender express in dwarves? How do mono-gendered creatures, like hags, express this?

This should also extend to cultural groups within races. What are the differences in culture between the dwarves of Highmountain Pass and the dwarves of Deepholm? Do Deepholm dwarves have a famous drag scene while Highmountain dwarves are serving body-ody-ody?

You Never Know Who’s Not Out

LGBTQ+ people face an inordinate amount of shame and danger when it comes to how and when we come out. Coming out is a life-long process as each social situation demands a choice: stay closeted or come out.

For some people, staying closeted is necessary for their survival. Physical and mental trauma is often a very real reality for some people in the United States if they were to come out. Staying in the closet may be their only means to survive.

Some of us – myself included – suffer deep shame around our sexuality. Others have been traumatized by messages given to them by their peers about how being queer is shameful or bad. Try to create a safe space for all the players in the game to let loose and have some fun.

By providing an inclusive and diverse game world for your table to play in, you can help end much of the cultural shaming that centers around queer identities. Don’t make fun of people playing opposite gender characters, or who are playing queer characters when they’re heteronormative. They may be exploring their own identity through their character.

If you include queer characters in your campaign and portray them as fully-rounded people, you can help dispell stereotypes around marginalized people. There are some people who may never have met or spent much time with LGBTQ+ people, people of color, people with disabilities, or other marginalized groups so they may view these groups as being strange or alien. By running an inclusive game, you might help players learn that hey – we’re people too.

A really excellent fantasy cartoon that does this is The Dragon Prince on NetFlix. They have queer characters, characters with disabilities, people of color all participating in and shaping the story. And none of them are stereotypes.

What happens if I make a mistake?

You’re human! It’s okay to make a mistake, but make an honest effort to educate yourself why it was a mistake and what you can do to rectify it.

Good communication is essential. If you offend a player, speak with them. Find out what you did wrong, how you can make up for it, and grow!

Educate yourself on negative tropes, on stereotypes, and on LGBTQ+ history. Don’t lean on queer people to give you the answers, google it and find out for yourself! If you are truly commited to being an ally, the work is on you to reshape your inherited stereotypes, to educate yourself on the history of the oppressed, and give space for queer voices in queer spaces.

There are a number of tropes that often pop up in pop-culture around queer peope that can have a negative or harmful effect and are honestly… boring.

This one is pretty infamous. A tv show will have one queer character (often white) and then match them up with another one and then BOOM the love interst dies — or they both die — and we all cry. Queer characters are often written to be more expendable than their straight counterparts.

Don’t do this. This trope enforces the idea that being queer means your are sentenced to a life of tragedy. That even if you achieve a small amount of happiness, it will be destroyed.

It’s homophobic, but it doesn’t mean that you can never kill any queer character. I’m not even going to entertain this bad faith argument, just use your head and don’t kill your one gay character just because you can’t figure out what to do with them.

Also, don’t have just one gay character. We travel in packs ;).

Try not to have your characters be cardboard versions of camp gays (very flamboyant dress, mannerisms, and interests) or manly gays (pure unbridled masculinity). Both are present in queer culture, and we’re proud of our camp and our manliness, but don’t let that be a defining trait of the character.

The same goes for lesbians and trans people. We’re more than our stereotypes. Our sexuality helps shape our identity but does not define the essentials of who we are. A good character shouldn’t be either.

Where’s All the Rest of the Community?

Include more than just gay males! This is one rooted in our society’s patriarchy and is an issue in the LGBTQ+ community, where if queer characters are present they’re white, cis and gay.

Add a passel of lesbians, a bevy of trans! Why not some asexuals and some intersex people?

We exist in groups and communities that are often self-formed families that serve as support when our birth-families won’t give us any. We are a proudly eclectic, and yet we still struggle with racism in the community.

Let your queer characters be diverse and ubiquitous. After all, we are in the real world!

Avoid having villains be the only queer people in your campaign. Have queer people show up in a variety of roles, from the friendly barkeep to the king of Grankle. Avoid portraying queer villains as having their primary motivation as being sexual or from unrequited love.

For many many years, the only role that queer people appeared in was as a depraved person, whose moral compass was broken because of their sexuality. This is a revolting stereotype that you need to avoid. Here are some great articles about these tropes.

Avoid portraying queer people as only being victims. We are given this message by media enough every day as it is, with reports of the murders of queer people outweighing reports of our successes.

Queer people probably will die in your campaign, because people die, but don’t let that be their exclusive role. If I haven’t said it enough, D I V E R S I F Y.

This is one I’ve seen on the internet and honestly? We stan. Give your local lesbian a sword and witness just how glorious she can be.

Let’s have more trans people winning contests for the princess’s heart, outwitting dragons, discovering lost cities, and being the awesome people they are.

Asexuals may not want a sexual relationship, but that doesn’t mean they can’t participate in romancing the Queen of Dragonport. The same goes for aromantics, maybe no romance, but friendships are great!

For reference look at… well, really any mythology. Greek and Roman myth has hundreds of examples! Patroclus and Achilles is my personal fav ship (after the Argo).

This is 100% true in the community. Drag Queen and Kings, and our Trans siblings, are often the ones who form the core of queer culture. Drag brings together the community into a celebration of life, and pride in who we are and just how fabulous we are.

I hope you found this guide helpful. It was really fun to write and I hope that it will be helpful for allies. if you’re a fellow queer badass, comment with something that I might have missed!

Next week I’ll be starting a series examining roleplaying backgrounds starting with Barbarians!

Photo credit to @archerinventive and her Pride Knights Project, who is just an amazing cosplay artist. Go follow them!!