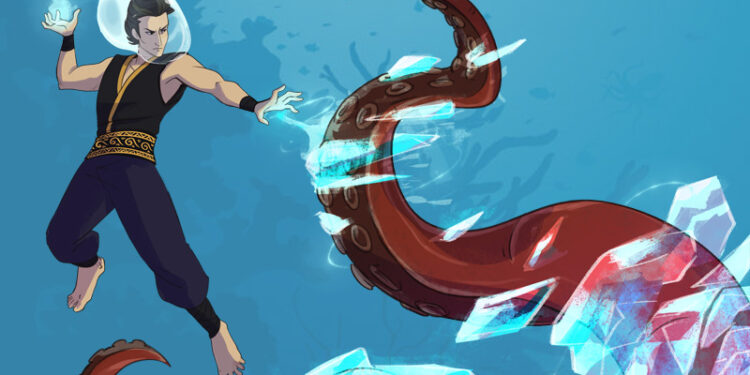 This week on the Campaign Trail, I thought I’d look at casting spells underwater. The core rules don’t worry about casting spells underwater too much and the main debate on this topic usually focuses on if can you cast a spell while holding your breath underwater. The following article provides some optional rules and support for spellcasting in an aquatic campaign with adventurers who can handle being underwater for an extended period (naturally or with magic).

Many spells require a verbal component, a particular combination of sounds, with specific pitch and resonance. While sound travels differently underwater and would likely impact this verbal component to some degree, there are no official rules to prevent the casting spells while underwater. For air-breathing creatures who are holding their breath and casting a spell with a verbal component, the following optional rule is intended to handle this situation.

While submerged underwater and holding its breath, a creature can cast a spell that requires a verbal component with a casting time of a reaction, bonus action, or action. After casting the spell, If the creature can’t breathe underwater, it immediately runs out of breath. The creature can survive for a number of rounds equal to its Constitution modifier (minimum of 1 round).

For wizards, an additional challenge is the need for a spellbook to record spells. These leather-bound tomes contain sheets of vellum written on with ink. When exposed to water, an unprotected spellbook and its spells would fare poorly. Most wizards born under the seas, including Bloodbinders, inscribe their spells on plates covered in gold or platinum leaf, which don’t corrode in saltwater. Etching glass and magically inscribing gemstones using the spell gemscribe (see Chapter VII – Magic Items & Spells), are additional methods used by wizards. Some other methods to record spells include carving symbols into stones or using seaweave ropes knotted into meaningful patterns. When an undersea wizard needs to read a spellbook, the protection from water spell or finding a cave with an air pocket works well.

The following advice and rules are provided to help you handle spell damage in an underwater environment. While these optional rules could provide a gotcha moment for surface spellcasters, any aquatic caster should be familiar with how magic works underwater in your campaign.

Acid. Initial acid damage from a spell should be as effective underwater as in an air-filled environment. Water will quickly dilute acid. You could create an optional rule that halves ongoing acid damage underwater but leaving this damage type unchanged underwater is as good a choice.

Fire. As mentioned in the previous Underwater Combat section, fire spells inflict only half as much damage as they do in the air. It’s important for underwater adventurers to consider the impact of selecting spells that create fire damage. In addition, there are several class options, spells,  monsters, and other effects found in this book that ignore this resistance.

Lightning. Electricity will spread underwater as it seeks a ground. As an alternative rule, you could require any creatures within 5 feet of a creature or object that takes lightning damage to make a DC 10 (or whatever DC you decide) Dexterity saving throw or take 1d6 lightning damage. For a spell with a range of touch, this could include the caster.

Thunder. Sound is much louder and travels further underwater. As an alternative rule, you could require any creature that takes thunder damage underwater to make a DC 10 (or whatever DC you decide) Constitution saving throw or become deafened until the start of their next turn (or another duration you choose). In addition, any thunder based spell that emits a loud sound should have its audible range quadrupled.