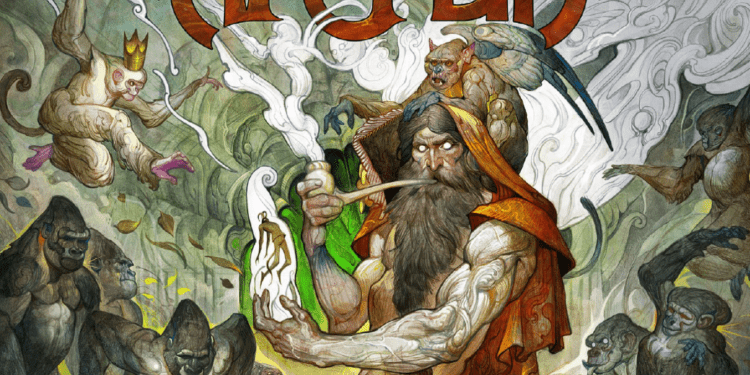 With the image of a shirtless bearded man smoking a pipe while surrounded by entranced apes comes the new issue of Arcadia. This piece of art is excellent, full of colors and weird details that easily has your mind going to those great mages from fantasy like Merlin or Gandalf. It sparks that mysticism and surprise that Arcadia is known to offer.

Being the first letter from the editor being written by Hannah, she shows us how she is well worthy of her title as the new chief editor and follow-up to James. While Matt and James have said that the title Arcadia from these magazines was just a random selection of a name from a land of Matt’s setting, Hannah can easily make a comparison between those lands and the issue. “A garden of inspiration and nourishment, full of awesome stuff that’s easy to use in your games and that excites you, terrifies you (or your players), and gives you endless opportunities for adventure”. I just love that description for these articles.

@brickk
In Unearthly Weapons, Ben brings us 9 new magic weapons to use at your table. Some have more backstory or flavor than others, but they are all interesting in different ways. What make these unique is that most of these weapons can transform into basically any weapon you like. I usually reskin magic weapons to fit the character I want to give it to, so if I want a ranger to have a holy avenger, I may reskin it as a bow and give it the same stats. This article removes that step from your hand and has the item transform into any weapon type the player wants when attuned to it.
The problem I find in this article is the same one I see within the DMG. While there are 5 weapons that can transform into anything, 2 are restricted to melee weapons, and the other two are restricted to swords. I know swords are the favorite weapon out there for medieval fantasy lovers, but I find it weird that none of these weapons were created with a bow, or crossbow in mind, or other ranged weapons for that matter.

On another note, I really enjoy that about half of these weapons have adventure seeds the author left for GMs to create epic events to gather the weapon. I must say, some of these adventure seeds are brilliant, like a sword from a master thief who has the whole plan on how to commit the greatest heist imbued spiritually in it. There’s also a side box that explains things that could be sacrificed by using a particular weapon that offered ideas I’ve never seen before, so props for that!
It’s a bit of a shame that there seems to be some sort of restriction on how many images the authors can have per article, because it could have been amazing to have an image for each of the weapons to show your players what they find when they encounter it. I imagine that would have to mean having less images on other articles or increasing the price of the magazine to afford it, so I’ll leave this detail as just a nitpick.

@crypticparlour
This article is surely one I will be coming back to often. If you’ve seen the NPC section from the Kobold Press’ monster books, you will find this section quite familiar. This is the NPC Appendix, Part 1, Sam directly talks to the reader indicating that he wanted more options for NPCs to have easily at hand. I love the fact that it says “Part 1”, meaning we’ll be getting more of this.
The NPC Appendix comes with the following NPCs: 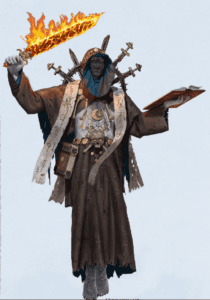 While I’ve seen similar NPCs stat blocks in supplementary official monster books, and third party ones, these ones use the Colvile’s Action Oriented formula to make them all the more fun to run! None of them are just basic “hit you many times with my weapons” type, having each their own unique thing, such as the inventor having unique weapons with wacky abilities (that the players can then loot and use!). The deadeye is another one of my favorites, marking the target and doing increasingly more damage the more they hit. Lastly, there’s the hierophant, who even has Villain Actions!

For each of the different NPCs, Sam writes an introductory section in which he explains ways to roleplay and run these NPCs, as well as some tactics. This makes it incredibly useful to give it a quick read while everyone is rolling for initiative. 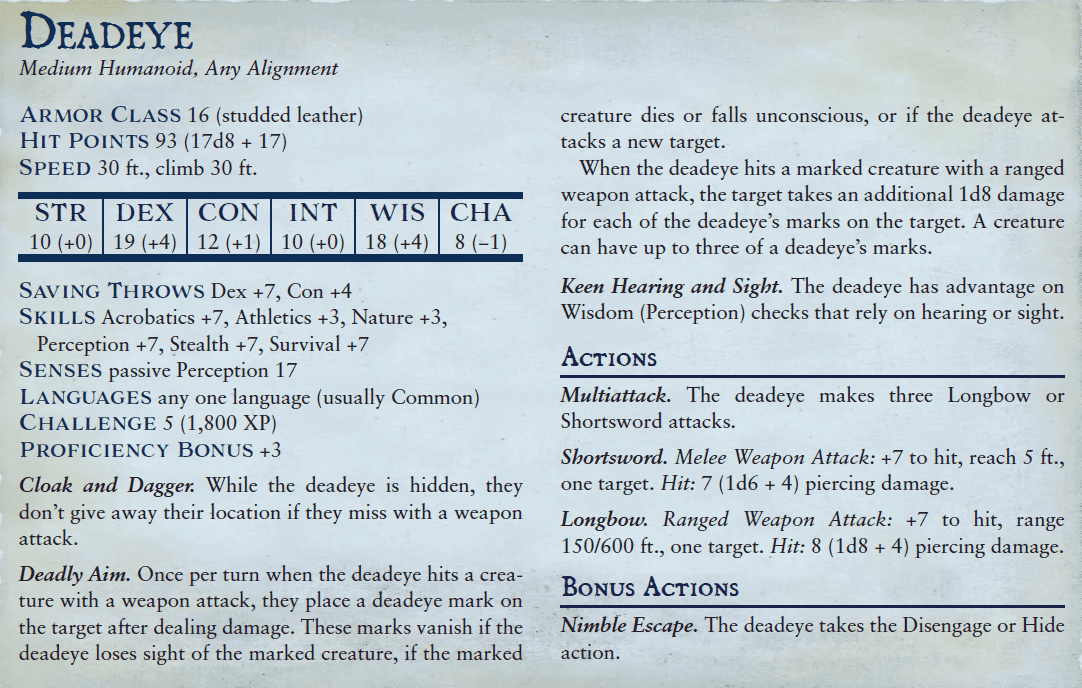 @Witchwater
The last article in this Arcadia issue is a selection of 3 encounters that are basically puzzle rooms. They all have something that make them fantastic and unique, as well as permanent rewards instead of just getting a simple magic item or pass to another place. The way they are built, these encounters can be set mostly everywhere, which is something I always enjoy from these articles. I’ll try to give my opinions while saying as little as I can to avoid spoilers. I personally enjoyed trying to solve the puzzle as I was reading it, so consider that as a fun activity to do while you read them.
The first puzzle involves a golem with medusa-like powers to petrify those who get close to it. In order to get through it, you must be worthy. This involves quite a bit of thinking outside the box, and the reward is one that is pretty different from the ones you usually get from these kinds of puzzles.
The second one is about going through a hallway where there is a giant rotating sphere. It involves a clear theme that you need to guess and follow to clear the three puzzles. There are ways to bypass the puzzle and use brute force that seem fun to run if the players wanted to try. It’s going to make things difficult for them, but they always had the first choice. There is a puzzle that involves wordplay, which always translates terribly to other languages from  my experience, but for those who play in English it does seem like a very fun puzzle.
Lastly, there’s the androsphynx encounter, which includes three smaller riddle rooms, apart from the initial riddle the androsphynx tells the characters. In the first one there is a bloody room, the second one has a bedroom, and the latter just a tree. The great thing about this puzzle is that all riddles are connected to solve the final riddle, which works as a reward as well. That’s actually really clever.
All puzzles that have handouts have the handouts easy to print at the end of the article. 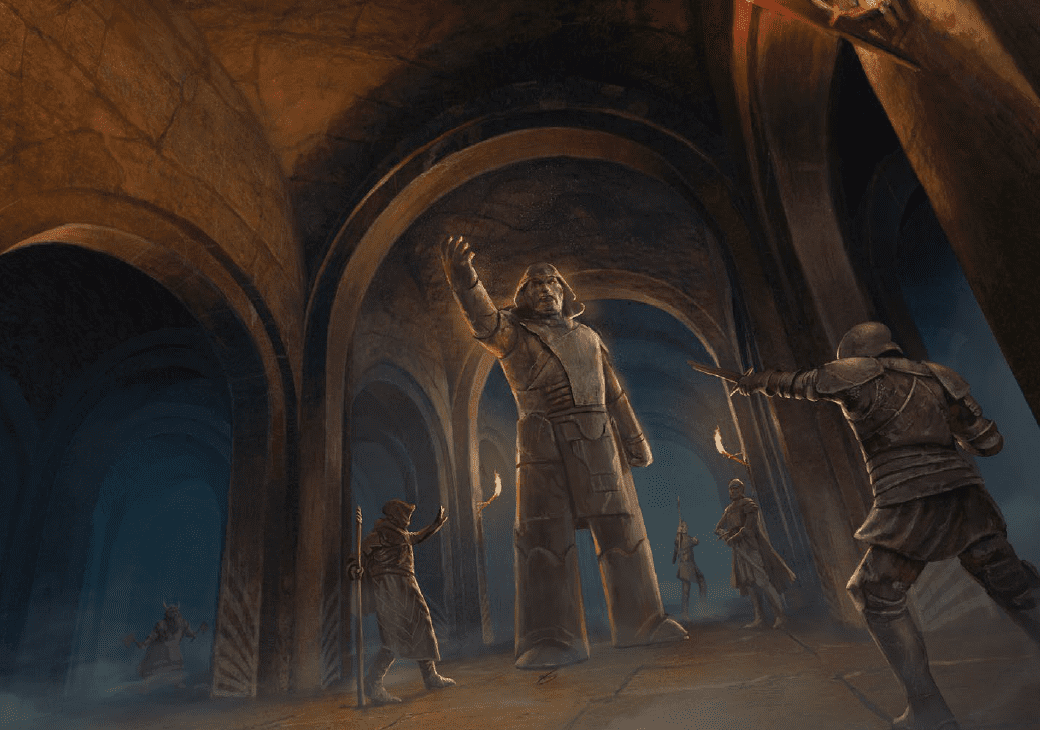 This issue from Arcadia has as always a lot to offer! If I were you I would get it just for the NPC Appendix, but having some new magic weapons, with interesting stories and plot hooks, as well as puzzle encounters you can just plug into your game isn’t bad either. All in all, it mostly depends on what you appreciate the most as a GM. I personally love monster design, so I will usually gravitate towards those kinds of articles.

Which would you say is your favorite article type from what we’ve seen in Arcadia? Which of these three is the one you enjoyed the most? Do you consider any of these a must-have? And why?