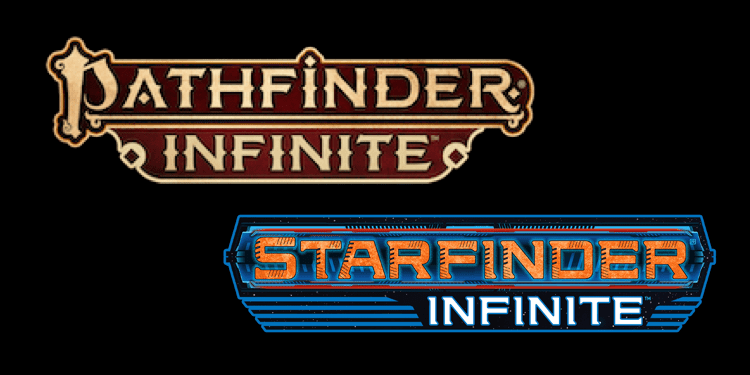 Monday, August 15, 2022 – Over the next two weeks, we’re celebrating all things Pathfinder Infinite and Starfinder Infinite. The Infinite marketplaces, powered by DriveThruRPG, are your one-stop shop for licensed digital content from the Pathfinder and Starfinder communities, including adventures, classes, fiction, and more that takes place in the Lost Omens campaign setting.

Through August 28th, 2022, thousands of Pathfinder and Starfinder titles are up to 40% off on the Infinite marketplaces and sister sites like DriveThruRPG, DriveThruComics, and DriveThruFiction.

Not sure where to start? Check out our Paizo picks spotlighted here.

Anyone can publish licensed Pathfinder and Starfinder PDFs on the Infinite marketplaces. Sometimes we notice a community creator whose designs go above and beyond. These folks are invited to join the Infinite Masters elite creator program and create “DLC” for your favorite Paizo launches.

With Dark Archive’s launch, we just recruited a new class of Infinite Masters, and over the next couple of weeks, we’d like to introduce them, starting with:

Vanessa Hoskins
Vanessa Hoskins has worked on several Pathfinder and Starfinder products including rule books, OP adventures, and Adventure Paths. She is a board member and host of Know Direction, and a cast member on Roll For Combat, Valorous, and KD’s Adventurous podcasts. She is also the owner of Ninja Cat Games, a small indie video game studio. https://paizo.com/people/VanessaHoskins
http://knowdirectionpodcast.com/
https://rollforcombat.com/
https://valorousgames.com/
https://ninjacat.games/

Helen Savore
This Paper Ninja reads, writes, folds, and plays TTRPGs. It’s not surprising that her stories are filled with unexpected folds and twists that blend seamlessly with reality. In Pathfinder circles, she is most well known for the Origami Folder archetype, and co-author of Vellum & Lace, all available here on Pathfinder Infinite. In addition to TTRPG writing, Helen Savore is the author of the Faerie Forge Chronicles. You can learn more about her works at helensavore.com, and find her published fiction on DriveThruFiction.

Tyler Beck
Tyler “Cartmanbeck” Beck is a scientist by training and a game designer by hopes and dreams. He has spent years helping organize the online arm of the Pathfinder Adventure Card Game organized play community, and has several design credits on products for that line. He has now created a Starfinder-themed version of the game, as well as many new characters for PACG.

Jeremy Hochhalter
Powered by the magic of coffee, Jeremy publishes TTRPG content and freelances for companies such as Kobold Press, Onyx Path, and Wyvern Games! In addition, they stream actual plays and chats on their Twitch channel (whpublications). Check out their work at whpublications.com!

Kim Frandsen
Kim is a lifelong gamer, having picked up a game book at the age of 7 (thank you Fighting Fantasy), and he’s never looked back since. While his career path took him away from the wondrous realms that we create and onto the high seas, Kim returned many years later to games. His favorite character of all time is a dwarven, the one who brought him into RPGs, but he didn’t get REALLY into it until his wife pushed him into taking part in RPG Superstar for Paizo in their final season. Finishing in Top 32 gave Kim the impetus to keep going. Since then, more than 100 different books and game materials have had Kim’s name in them, ranging from books to maps and to board games.

Derry Luttrell
Derry Luttrell is an animator hailing from the midlands of Ireland. They started running Pathfinder Adventure Paths with their friends in 2017, and have since completed a total of 6 (and counting!). A good portion of these APs were run for the award-winning Dice Will Roll show, the Queerest Pathfinder Podcast on the Planet, where they ask the Hard Questions like “how do you kiss a tengu?” They’re one half of the duo that makes up the Classes+ team alongside Tony Saunders (the half, they assert loudly, throws messy half-ideas at the wall before expectantly turning to the other half for approval). In their spare time, when they have it, they run a Homestuck fan server and occasionally dabble in comic art.
Art Portfolio: https://derryluttrell.pb.studio/
Personal Twitter: https://twitter.com/Derryzumi
TTRPG Twitter: https://twitter.com/dicewillroll

Tony Saunders
Tony is a writer and editor of Pathfinder Second Edition content, a moderator of https://reddit.com/r/Pathfinder2e and https://www.reddit.com/r/Pathfinder2eCreations subreddits, and a long-time tabletop gamer. He loves being forever GM and making adventures. He’s also a regular author for Legendary Games at www.makeyourgamelegendary.com.

Grady Wang
Grady Wang is an ENNIE-nominated writer and cofounder of The Gallant Goblin, a TTRPG review and publishing company. He is best known for being the project lead of Queerfinder, an in-world travel magazine for Pathfinder’s Golarion setting. He is also a layout instructor for the Storytelling Collective’s Write Your First Adventure program and a freelance writer for Paizo. Grady currently lives in Texas with his partner, Theo Thourson, and a variable number of cats. You can find his work at the following links:
TTRPG reviews: https://youtube.com/thegallantgoblin
Website: https://gallantgoblin.com/
Pathfinder Infinite: https://www.pathfinderinfinite.com/browse.php?author=Grady%20Wang&affiliate_id=1398733

Theo Thourson
Theo Thourson is an ENNIE-nominated writer and cofounder of The Gallant Goblin, a TTRPG YouTube review channel and publishing company. He combines his love for gaming with his professional background as a school psychologist to advocate for mental health, safe schools, and LGBTQ+ rights. He has written I Am Your World, a 5e adventure about gaslighting, and Be All My Sins Remember’d for the Uncaged: Goddesses anthology about a neurodivergent god. He also loves all things cute and sweet, which is why he produced the Hero Plush line of cuddly stuffed animals based on TTRPG’s less-represented playable options, including a rainbow set of kobold plushies. Theo currently lives in Texas with his partner, Grady Wang, and several wonderful cats. You can find his work at the following links:
TTRPG reviews: https://youtube.com/thegallantgoblin
Kobold Plushies: https://koboldplush.com/
Pathfinder Infinite: https://www.pathfinderinfinite.com/browse.php?author=Theo%20Thourson&affiliate_id=1398733