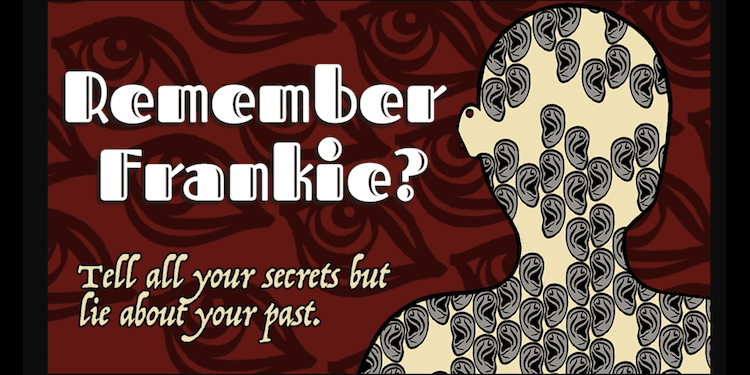 Brick by brick, Frankie was crushed by the weight of his own pride.
He’ll keep you dry where the rain never stops.
This old spiral staircase took its time to bend his ego,
a contortion that set his gaze beyond the mirror.

What is Remember Frankie?

Remember Frankie? is a storytelling game about creating a shared history at the crossroads of memory and fiction by Rhodrick Magsino for 3-4 players. Players will reminisce about an imaginary person using real memories – playfully twisting the facts of their story to create a thematic veil of mystery. Anecdotal stories about Frankie are accompanied by stylized lyrics composed by the other players – breathing life into Frankie’s persona while emphasizing the connection players have to each other. The 56 page full-color digest-sized RPG zine is Rhodrick’s second tabletop game and first RPG publication through Alewood Games.

I originally started designing Remember Frankie? in 2015 as a card game. I never felt it was a good enough execution of the idea so it sat on the shelf for a long time. When RPG zines started becoming more widely accepted and innovative within the last few years – I finally saw Frankie’s real potential within this format! It has also become a very personal passion project once my partner, Robin, joined as the artist and we really started incorporating emotional themes within the system. By talking about Frankie we are, in many ways, talking about ourselves and I love the idea of reinventing ourselves through our memories of an imaginary person. It’s a cathartic release of personal feelings with absolute creative freedom to reinvent oneself. It’s like a Tom Waits song where he reminisces about an eccentric character from his past. How much of that character is actually himself, or someone else, or complete bull? Is he pulling my heartstrings or my leg? That’s exactly the mood I’m aiming for with Remember Frankie? Where players can spill all their secrets, lie about their past and then turn it all into a song.

When I began to work on the illustrations for this RPG I took some time to consider how memories begin their recall forward inside one’s own mind. Is the story a hazy flashback like so many teen films or maybe a fluffy cloud with an image of a sandwich that causes a stomach to growl? Maybe it’s sharp and harsh but clear despite key elements missing and other parts are repeated. Some details in your memory can be reflected in changes in style over time. Perhaps like me you are unable to visualize Frankie internally due to aphantasia but know their scent of fresh hay or maybe your Frankie has a high pitched bark that greeted you daily as a child. I attempted, as much as possible, to use the knowledge that we don’t all recall a memory the same way to be represented in the art. The work needed to be ambiguous to allow players to recall their own Frankie while giving some aid to those who may need a spark of inspiration.

What People Are Saying

“Remember Frankie is an interesting thought experiment, inviting players to draw from real experiences to form the tale of a simultaneously fictional and yet very real character. And in the end we all know Frankie, because we are all Frankie in some way.” Cory Dungeons

“Remember Frankie is, both clinically speaking and on a personal level, a beautiful opportunity to explore and express the nuances of what makes us human. This is the birthplace of connection and can lead to immense healing.” Kim Johnson LMHC, MT-BC

“Incredible game. Found out my friends may have committed some felonies…” Shaun Hildner (Media Producer, 37Signals)

“Remember Frankie is an exercise in recollection. It is inherent in the title, in the text, and in the gameplay. From the moment the game starts, you are a participant in a story; one that is an extension of something personal, yet set to be a part of something extraordinarily communal.” Adrian Anguiano (Sound Designer & Composer)