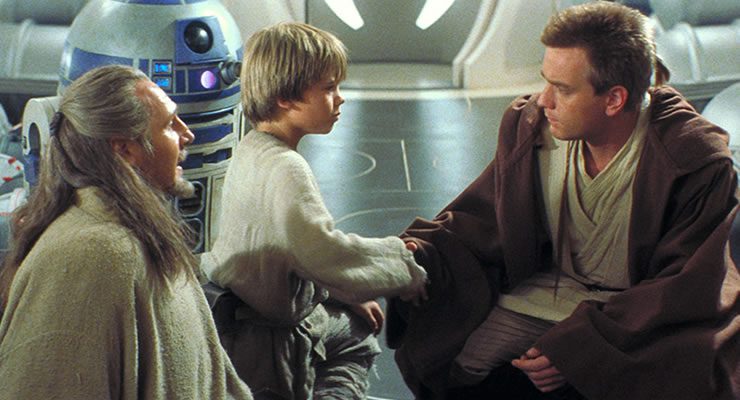 So I started making this Star Wars Jedi build with my son. He is a Dungeons & Dragons 5e rules guru, and I discussed some things I’d light to see, and ideas I had and we worked on this for a while. We wanted to make the rules work for us, so there really aren’t any new rules on the build except for lightsabers. So it is a build using the existing rules with some guidelines, and should work within any campaign setting. So we did add a new item, a lightsaber and the feat to build them. If that isn’t cool in your campaign then choose different feats or just increase your ability scores. And so here it is:

First we had to decide on what was a Jedi and use the existing classes to define one, and then at the same time how to handle lightsabers in D&D 5e. So first we broke it down into Jedi ranks and decided on the levels: Jedi Initiate (Youngling) Level 0, Jedi Apprentice (Padawan) (Level 1), Jedi Knight (Level 9) and Jedi Master (Level 14). That gave us the starting point, but a Jedi is more than just a fighter. He has special powers and is able to use the Force. So we decided to take the Monk Class and the Ki ability, and that would help to round it all out. For the Monastic Tradition we went with Way of the Open Hand. For the lightsaber, we could just make it a special sword, or several swords. We chose to make several swords that were attained through enlightenment through the Jedi ranks by Feats at specific levels and usually have to wait afterwards (see below).

But not all Jedi Knights are the same. So once Jedi Knight is attained, then Jedi Guardian, Jedi Consular or Jedi Sentinel path is chosen, which are just options after level 7 for choosing either additional levels in Monk or Fighter classes. For Jedi Guardian the remainder of class levels are chosen in Fighter Class, for Jedi Sentinel a mix of Fighter & Monk Classes are chosen, and for Jedi Consular the rest of the gained levels then Monk is the only one chosen.

I started with a standard array for the ability Scores, and then decided to move 2 points into Strength. So with a Dexterity and Wisdom focus, with middle scores in Constitution and Charisma, and average scores in Strength & Intelligence.
Str 10, Dex 15, Con 13, Int 10, Wis 13, Cha 12

This build below is for a Jedi Consular starting after you attain Jedi Knight status at by continuing to increase Monk Levels after Level 7, all the way to Level 20

At Level 1 choose either Dueling, or Two Weapon Fighting style. You have attained the rank of Jedi Apprentice
At Level 5, choose fighter archetype Battlemaster and your maneuvers
At Level 6 Choose Way of the Open Hand monastic tradition, you learn Open Hand Technique feature (Flurry of blows causes targets to be knocked down, pushed 15 feet & can’t take reactions)
At Level 7 pick Jedi Knight Light Saber Feat
At Level 9 Learn Wholeness of Body and gain the ability to heal yourself (gain healing 3x monk level of hitpoints)
Level 11 pick Jedi Master Light Saber Feat
At Level 14 you learn monastic tradition feature Tranquility and have attained the rank of Jedi Knight. Next level you will start following a Jedi Knight Path (Jedi Consular is this build)
At Level 20 you learn monastic tradition feature Quivering Palm.

Increase Dexterity 1 point. You can gain this feat at any level, but you will need training & instruction from a Jedi Knight or Jedi Master. Lightsabers are built with rare crystals and Jedi magic/science. And take time to craft.
They will make you wait until Level 1 (Jedi Apprentice). At level 1 gain the final knowledge and ability to build Jedi Apprentice lightsaber.

Increase Dexterity 1 point. You can gain this feat at any level, but must find a Jedi Knight or Jedi Master to help you build the lightsaber. They will make you wait until Level 9(Jedi Knight). At level 9 gain the ability to build Jedi Knight lightsaber. Treat the lightsaber as a magical item for the purpose of overcoming resistance and immunity to non-magical attacks and damage.

Increase Dexterity 1 point. You can gain this feat at any level, but a Jedi Master to help you build the lightsaber. The Jedi Master will make you wait until Level 14(Jedi Master) to finalize the instruction. At Level 14 gain the ability to build Jedi Master lightsaber. 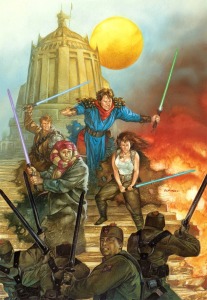 Thank you for reading all of this. Please if you have any comments, or changes or catch an error let me know.