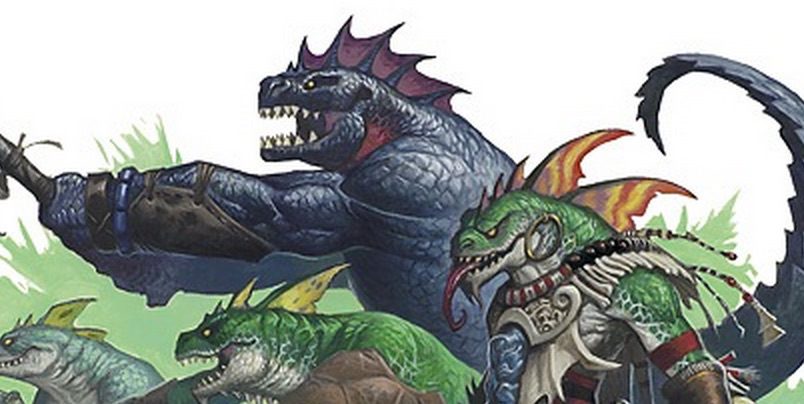 Lizardfolk are typically seen as primitive humanoids with minimal intellect and a brutal, highly territorial culture. Though that is true in many villages, lizardfolk honor intuition and wisdom in a way most civilized cultures cannot understand. Lizardfolk adventurers are rare. Those who are banished for real or perceived crimes may turn to mercenary or adventuring life in order to survive.

On some worlds in the Material Plane, groups of lizardfolk have split from their primitive ancestry and developed into more civilized cultures.

Though not fully aquatic, lizardfolk make a great PC race for island and coastal campaigns, and for those who want to explore submerged destinations without sacrificing utility on land.

Ability Score Increase. Your Strength score increases by 2, and your Wisdom score increases by 1.
Age. Lizardfolk mature faster than humans, reaching adulthood at 16. They also have shorter lifespans, with few lizardfolk living longer than 60 years.
Alignment. Typical lizardfolk are highly territorial, following the beliefs and traditions of their tribes. They have no notion of civilized morality, and they find the concepts of good and evil alien. As such, lizardfolk tend toward neutrality. Lizardfolk who choose to leave their villages, or who are banished, may do so for a variety of reasons, including an alignment conflicting with typical lizardfolk society.
Size. Lizardfolk are slightly larger than the average human. Your size is medium.
Speed. Your base walking speed is 30 feet. You have a swim speed of 30 feet.
Bite. You may use your action to make an attack with your bite. This attack deals 1d6 piercing damage plus your Strength modifier and you have proficiency with the attack. This damage increases to 2d6 at 11th level.
Natural Armor. If you are wearing light or no armor, your base AC equals 12 + your Dexterity modifier. You can use a shield and still gain this benefit.
Keen Senses. You gain proficiency with Perception checks.
Natural Predator. You gain proficiency with Stealth checks.
Hold Breath. You can hold your breath for a number of minutes equal to your Constitution score.
Languages. You speak, read and write Draconic, plus one additional language of your choice (typically Common).

The lizardfolk presented in the Monster Manual has few distinguishing traits, hold breath and a swim speed among them. As such, I decided to fold skill proficiencies into the mix that I would normally attribute to class and background choices. I originally gave them proficiency with both Stealth and Survival checks as part of Natural Predator, but in combination with Perception proficiency, this seemed overpowered. As most lizardfolk will be barbarians, rangers or druids, or take the outlander background, Survival will be easily accessible.

I would have preferred to have their Ability Score Increase be Constitution +2 and Wisdom +1, but it’s hard to overlook the Strength scores of the Monster Manual’s lizardfolk. Instead of making them the same as minotaurs (+2 Strength, +1 Constitution), I decided to focus on a score that would give lizardfolk PCs more depth–Wisdom. Wisdom is about instinct, perception, intuition and willpower. I see many humanoids that have animalistic ancestry as having high wisdoms. Where they would have low Intelligence scores, lizardfolk make excellent rangers, clerics and druids.

Natural armor, a feature I left off the minotaur race, makes more sense here for two reasons, 1) lizardfolk not only have thick hide, they have hard scales, and 2) again, they are lacking the number of racial features that would put them on par with dwarves and elves. Minotaurs have both the Gore and Charge features which make them brutal melee combatants. Though lizardfolk have the Bite feature, the damage is less than Gore and doesn’t scale as the Charge feature.

Though the core lizardfolk can hold their breath for a flat 15 minutes, I decided that tying it to Constitution score not only made more sense, it was more interesting.

Common backgrounds include Folk Hero, Hermit, and Outlander. Criminal, Sailor, Soldier, and even Urchin are common in cultures where lizardfolk have a larger presence among metropolitan cultures.

Lizardfolk adventurers are drawn to the Barbarian, Fighter, and Ranger classes, though Druids, Sorcerers with the draconic bloodline, and warlocks chosen by the demon lord Sess’inek also exist. Though the former group is far more common among the general populace, the latter group are drawn more toward exploring the world beyond their village boundaries.

The aquatic barbarian, cleric, paladin, sorcerer, fighter, druid, and ranger archetypes from the Aquatic Builds series are all excellent choices for lizardfolk that live in coastal or island communities. Though rare, bards from the College of the Sea Singers might hail from rare lizardfolk subraces from tropical environments.

In campaign worlds where lizardfolk have evolved into a more civilized race, replace the Natural Predator class feature with the following:

Crafty. You gain proficiency with any one tool of your choice.