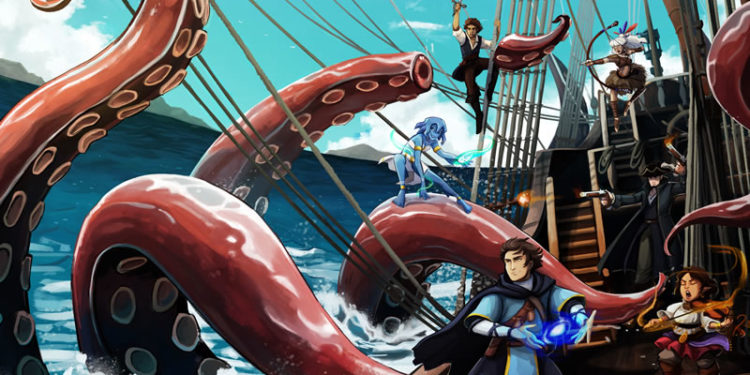 Over in Harbinger of Doom, I wrote a collection of six spells developed by underwater peoples, intended for Under the Seas of Vodari. In this article, I’ve created five more, tilted more toward utility than combat. Many thanks to Shawn Ellsworth for initial concepts on all but the first of these spells.

A creature restrained by this spell must make another Strength saving throw at the end of each of its turns. If it succeeds this saving throw or dies without succeeding this saving throw, the spell ends and the ice encasing the creature explodes. That creature and all creatures other than you within 10 feet of it roll a Dexterity saving throw. On a failure, they take 7d6 cold damage, or half damage on a success.

The ice melts harmlessly, rather than exploding, if the spell ends because you cease concentrating on it, the duration expires, or the spell is dispelled.

When you cast this spell, you choose one willing creature you can see. For the duration of the spell, water around their head or other air intake point is transformed into breathable air, to a radius of 6 inches. The creature gains advantage on saving throws against inhaled poisons and airborne diseases, and is immune to inhaled poisons administered underwater.

At Higher Levels. When you cast this spell using a spell slot of 2nd level or higher, you can choose an additional target for each spell slot level above 1st.

You give one creature the ability to survive the freezing cold and crushing pressure of the ocean’s depths. They gain the ability to breathe water and suffer no ill effect from natural environmental conditions related to cold, pressure, or rapid pressure changes in water. They also retain their normal mode of respiration.

At Higher Levels. When you cast this spell using a spell slot of 4th level or higher, you can choose an additional target for each spell slot level above 3rd.

You transform up to eight willing or unconscious creatures, which can include yourself, into fast-moving water. This spell functions only on creatures that are underwater, and they can’t leave that body of water while transformed. For the duration of the spell, their movement speed doubles, they don’t provoke opportunity attacks, they can pass through any crevice that water can pass through, and they gain a +10 bonus to Dexterity (Stealth) checks. When they are not hidden, they appear as vague impressions of themselves in the water. They can make a Shove attack by passing into another creature’s space, but can’t otherwise attack or cast spells.

You create a wall of hard, living coral. The wall appears within range on a solid surface, and lasts for the duration. You create a wall that is 80 feet long, 10 feet high, and 5 feet thick, and it blocks line of sight.

A creature restrained by this spell can roll a new saving throw at the end of each of its turns. On a success, it is no longer restrained.

The wall of coral is an object that can be damaged and breached. Each 10-foot length of the wall has AC 13 and 30 hit points.

If you maintain your concentration on this spell for its whole duration, the wall becomes permanent and can’t be dispelled. If the wall is not immersed in saltwater, it becomes dead coral soon thereafter.

Rushing current is intended to be a panic-button escape spell (which we see as particularly important for open-ocean encounters) or a high-powered infiltration spell, which is why I incorporated the pass without trace Stealth bonus. I’m strongly considering moving it down a spell level.

Wall of coral is very subjective best-parts version of wall of thorns and wall of stone, used for aquatic construction and ecology, cutting back a bit on damage and adding restraint.

Air bubble and deep diver are both about supporting exploration of the deeps by air-breathing characters. Because my kids watch a lot of Octonauts, air bubble is also a bit of a reference to snapping shrimp. They both have applications for our underwater races, many of which have the Amphibious trait or don’t have the ability to endure the deepest depths.

Kharaste’s bitter prison is a 5e take on the 4e spell devouring ice – a debuff that explodes into damage. The spell can turn completely insane for area damage at higher levels, but that requires multiple creatures to fail their saving throws.

How to Create a Compelling Villain