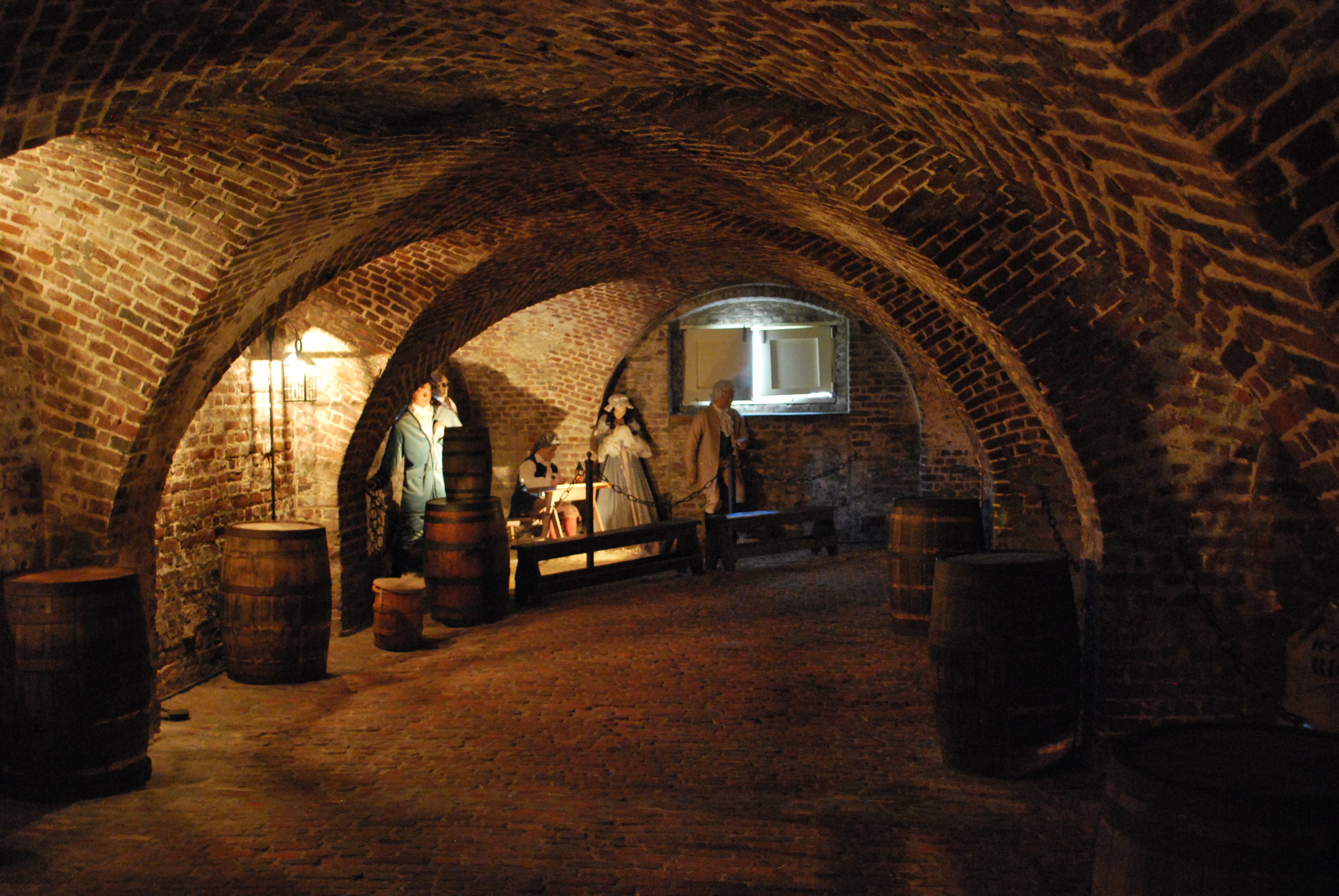 There are as many kinds of dungeons as there are monsters: living dungeons, conquered dungeons, ruined places, and many more. But dungeons work best when they have a plausible reason for their existence. If it has living inhabitants, there needs to be a way for food to get in and out; and a reason for its inhabitants to be there in the first place. I want to discuss a underutilized kind of dungeon for your next fantasy game; a dungeon that was designed to serve the same purpose as fallout shelter during the cold war.

During the cold war and the subsequent rise of fears of nuclear war lots of people and organizations began the grim task of building fallout shelters (by 1965, citizens in the US had constructed an estimated 200,000 individual and family shelters). These were underground bunkers were built (hypothetically) to provide some protection from the effects of nuclear blasts: the pressure waves, firestorm, and resulting fallout as well as store the tools and supplies needed for life after.

Most would have probably done a spectacularly shitty job in this task – even on something so ‘basic’ as not roasting their inhabitants alive on their trapped body heat.

In gaming, the concept of these sorts of shelters is brilliantly utilized in Fallout whose iconic vaults were truly designed for social and medical experimentation. By the time the player gets involved, most have transformed into appropriately themed explorable dungeons (like a vault overrun by mutant plant creatures, or ghouls, or insane clones of the last vault survivor). If you’re running a scifi game, I highly recommend looking at the list of Fallout vaults for ideas on how to create compelling, setting appropriate dungeons.

But even if you aren’t playing a science fiction game, you can still create and utilize the same survivalist concepts to make fantasy ‘fallout shelteresque’ dungeons (hereafter simply ‘Shelter Dungeons’). Even better, with the inclusion of magic, all manner of fascinating design possibilities open up.

Why Would Beings Build Shelter Dungeons?

In many (probably most) fantasy setting there exists magic that is the equivalent to nuclear weapons. The various apocalypses that a hypothetical Shelter Dungeons could be (with examples from the lore of Gollarion/Pathfinder, the game world I’m most familiar with)

All of these being predictable (maybe) thanks to divinatory magic.

I should point out, it’s not even necessary for these cataclysms to have happened, merely that someone, somewhere believed they could or ‘were gonna’ happen and prepared accordingly. Sentient beings, spending years or even centuries trapped underground unnecessarily is the stuff of nightmares and great stories.

Logistics of a Shelter Dungeon

There’s a quote I’m going to bring up often in this column about survivalism and gaming:

Basically, it’s well and good (and usually fairly enjoyable) to talk about protection, clever stratagems, and weaponry both in warfare and with regards to prepping. But the more important consideration is, how do you get the men, machines, and all the things necessary to support them where you need them. When it comes to fantasy shelter dungeon design, here are the logistical concerns you should be considering. If you’re clever and creative, each one of these can create story hooks and adds verisimilitude to your creation.

Designing and Building a Shelter Dungeon

The ‘simplest’ way to create a appropriate shelter with D&D style magic is perhaps to create a permanent demiplane. However, that’s some epic level sorcery, and a king might well go with the significantly lower cost method of utilizing countless laborers and a host of lesser magics to construct an intricate dungeon of whatever size is appropriate.

Conceivably, especially with magical support, shelter dungeon builders could attempt to create an entire, working, self contained ecology – we can look to the Biosphere 2 project for examples of how difficult this is or to ecospheres as to what ‘working’ examples might resemble.

Transforming a Shelter into a Dungeon

By default, dungeons should be horrifying; if it’s a shelter providing actual support and protection for non-evil beings in a non-evil then it probably isn’t suitable for explorations by good (or good curious) murder hobos… I mean adventurers. An essential question when designing a shelter dungeon is to determine if the transformation from shelter to shelter dungeon happened because things went wrong or things went right.

The same thinking that informs survivalist notions about the real world can be applied to a game world (in this case fantasy) to create compelling, interesting, and above all ‘real-feeling’ scenarios, monsters, and plot hooks. I’ll also end in a plug for Raging Swan’s Be Awesome at Dungeon Design everything done by Raging Swan/Creighton Broadhurst is absolutely stellar, and ‘Be Awesome…’ is a superb resource at a ridiculous price (Free!) For GMs it’s a must, but even players can get a lot out of this in how they appreciate and approach dungeon delving. You can also read our interview with Creighton Broadhurst.

Tomorrow, in my column System Agnostic I’ll be using these principle to draft a dungeon concept you can implement in your game.

So what did I forget to mention? Be sure to let me know in the comments. And if you liked this article, please blog about, post it on facebook, or share it in your favorite forum/subreddit.

I also used these principles to craft a dungeon concept: Home of the One Hundred Saved.

*Yes, I know. If you really want to split hairs Tar-Baphon isn’t technically a God. But he did fight several and kill one and he’s possibly immortal… which all seems close enough to God status to me.

A couple commentators have pointed to the Earthdawn RPG as more or less entirely predicated on this concept. Sounds like something right up my alley! Thanks for the heads up guys.

System Agnostic: The Home of the One ...