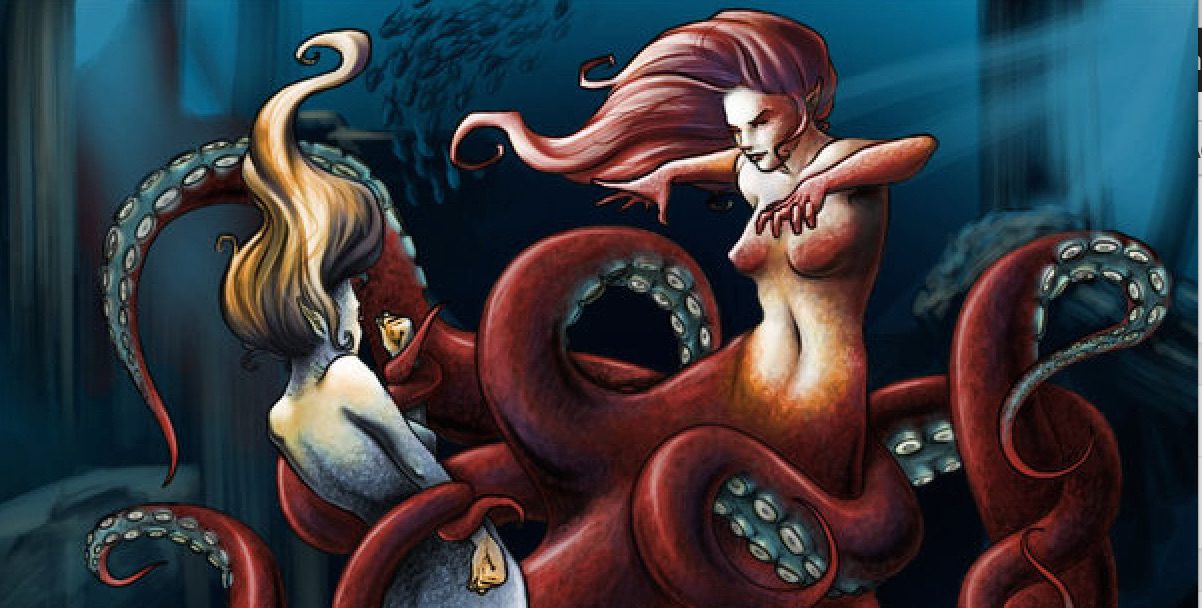 The history of the cecaelias as a race is all but unknown to scholars of the surface world. Though some surface dwellers believe they are a subrace of merfolk, this race of cephaloids, and indeed the merfolk, would take great offense at the comparison. Most merfolk scholars attribute the race’s origins to the Age of Aboleth, paralleling the race’s creation to that of the tieflings of the surface world. The subrace of Deep cecaelia embrace the comparison, while the more social and civilized cecaelia found in tropical regions claim no such association.

Cecaelia are not nearly as wide-spread as the ubiquitous merfolk and rarely have direct contact with air-breathing cultures. Cecaelia live in small, nomadic family groups, living with their families until they reach maturity around age 10, at which time they may leave the family group and strike out on their own. Cecaelia settlements average a few dozen members, with any larger than a few hundred being extremely rare. Individual members are often found within the settlements of other sentient aquatic races, such as merfolk, sahaugin, and koa-toa.

Ability Score Increase. Your Dexterity increases by 2, and Charisma increases by 1
Age. Cecaelia reach maturity by the age of 10 and rarely live longer than a century.
Alignment. The ceaelia’s self-reliance, preference for small social structures, and standoffish attitude, leads them to chaotic and neutral alignments, as well as a reputation for being evil. This reputation is born as much from social stigma as truth and cecaelia of good alignments are as common as others.
Size. A cecaelia’s torso averages 2-3 ft, though their tentacles reach 8-10 feet in length. Your size is medium.
Speed. Your base walking speed is 15 feet. You have a swim speed of 30 feet.
Darkvision. You have darkvision to a range of 60 feet.
Tentacles. The lower-body of a cecaelia consists of a crown of 8 tentacles, the bottom surface of which are covered in a layer of soft, hydrostatic disks. This disks can be manipulated by the cecaelia to create a suction powerful enough to suspend the creature out of water, as well as grip opponents with frightening strength. Though prehensile enough to manipulate objects, the tentacles do not possess the manual dexterity or speed required to use weapons effectively. You gain advantage on Athletics checks made to climb and to either initiate or end a grapple. You may take the Use an Object action as a bonus action on your turn and may due so at a range of up to 10 feet.
Hydrostatic skeleton. The internal skeleton of your upper torso is made of a flexible cartilaginous tissue, stronger than that of surface-dwellers, but far more flexible than bone. Their lower body’s support structure is composed entirely of vessels that can be filled and emptied of fluid, allowing them to stretch, manipulate, expand, and contract their entire body. You gain resistance to bludgeoning damage. In addition, you may squeeze through spaces up to two size categories smaller than you with no penalties. Weapons, armor, and other items must also fit through the space to use this ability. For the purposes of this ability, size categories smaller than Tiny (2 1/2 ft square) equal one-half the previous category. For example, a medium cecaelia may move through spaces as small as 2 1/2 ft square with no penalties and 1 ft square with normal penalties.
Camouflage. You may alter the color and texture of your skin, allowing you to blend into your surroundings. This ability grants you advantage on Stealth checks to hide. If you are wearing no clothing or armor and carrying no items, you may make a Stealth check to hide even when a creature could normally see you. Both of these abilities are lost if you move or take an action. You may use a Sleight of Hand check to conceal a small weapon or item on your person while hiding in plain sight at the discretion of your DM.
Amphibious. You can breath both air and water.
Languages. You speak, read and write Aquan as well as one other language (typically Common)

The origins of the word cecaelia is elusive, though it’s been the generally accepted term for “octo-folk” or cephaloids since around 2007. The race has existed in one form of myth or another for centuries, but Ursula from Disney’s The Little Mermaid is attributed to bringing these creatures into the public awareness.

Cecaelia are often portrayed as evil “sea witches.” As a playable race, of course, I wanted to give allowances for PCs of all alignments. I also didn’t want them to be a sub-race of merfolk, so making their culture focused around small family groups and intimate settlements was an easy way to separate them from the more common aquatic races. That cultural twist also feeds well into their reputation for being chaotic and evil.

As with other creatures that have multiple limbs, I wanted to create something useful without falling into the extra-attack cliches. As well, making their skeletal structure a balance between the hydrostatic skeletons of cephalopods and human endoskeleton allowed me to keep the race both unique and inhuman. 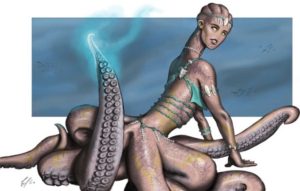 I rarely imagine cecaelia with true mammalian hair and prefer them as hairless, but the only image I could find of them that way is the Merkoth from Alluria Publishing’s “Waves of Thought“. Their appearance in your campaign world is entirely up to you.

Unlike many other aquatic classes, cecaelia rogues and warlocks with pacts to The Great Old One are disturbingly common. Of course, the aquatic cleric, sorcerer, fighter, druid, and ranger archetypes from the Aquatic Builds series are all available to cecaelia, as are bards from the College of the Sea Singers. Barbarians and paladins, even the aquatic variants, are uncommon.

These cecaelia have found their home in the Depths, the aquatic equivalent of the lightless Underdark. Deep cecaelia are significantly larger than their low-pressure kin and rarely come into the light zone.

Nomadic cecaelia that travel the open oceans have lost the ability to blend into surrounding terrain, but have developed abilities that help them avoid the enormous predators that hunt and scavenge the featureless expanse.

Open Ocean Cecaelia Traits (replaces Camouflage): Water jets [you may use a bonus action to take the Dash action. You may only use this ability underwater]. Ink cloud [you may release a cloud of ink, creating concealment commonly used to escape predators; you may cast fog cloud once per long rest with a range of Self and a duration of 1 minute. The cloud does not move with you.]

Mimic cecaelia are a subrace by skill and culture, not genetics. These cecaelia use their shapeshifting abilities to hide in plain site, often living within aquatic and surface communities that perceive the race as inherently evil. A mimic’s reasons for living among other races could be as malicious as manipulation and power, or as benign as curiosity or even assistance.

Mimic Cecealia Traits (replaces Darkvision and Camouflage): Mimicry: [You gain proficiency with Stealth checks. In addition, you have learned to alter your color, body, and skin to imitate creatures other than yourself. As an action, you may gain the benefits of the change appearance option of the alter self spell for up to 1 hour without verbal, somatic, or material components. Unlike the spell, you may use this ability to appear bipedal, quadrupedal, or piscinoid (including fish, merfolk, cartilaginous creatures such as rays, and marine mammals such as dolphins and seals), though your movement modes and speed do not change. You may choose to maintain the benefits of this ability after the first hour. At the end of each additional hour that you maintain the ability, or any part thereof, you gain 1 level of exhaustion. For example, if maintain the ability for 2 1/2 hours, you gain 1 level of exhaustion after the second hour, and a second level after the 1/2 hour. Once you use mimicry, you may not use it again until you take a long rest.]

Settlements of tropical cecaelia gather within coral atolls, whether natural or cultivated. They also have the largest group settlements, ranging from multi-family groups of twenty individuals or more, to large settlements of aquaculturists and hunters up to hundreds. They are the only cecaelia tribe (besides mimics) that commonly live above 50 meters or have semi-regular contact with surface cultures.

Tropical Cecaelia Traits (replaces Darkvision): Settled [you are trained in any one skill or tool of your choice].