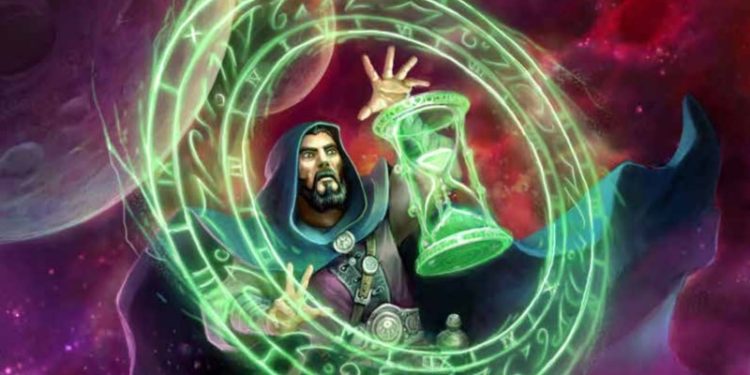 Today I’m digging into Deep Magic: Time Magic for 5e, by Carlos Ovalle, from Kobold Press. Tribality received a free review copy, which to my delight landed in my inbox. As the title signals, this is a PDF of time-magic-related content: subclasses, spells, and we’ll see what else. While this is a review, I’m still more about analyzing design than any other factors that go into conventional reviewing.

The document is 7 pages of game content, plus seven more pages of front and back cover, credits, OG, and other necessities. There are two subclasses, a Time Domain for clerics and the Timekeeper Arcane Tradition for wizards. The Time-Lost Traveler is a new background, followed by eleven new spells. (The DTRPG page says twelve; that appears to be a miscount.)

The artwork is solid; I particularly like the cover art, which seems to reference the great casting visuals of the Doctor Strange movie.

The theme here basically explains itself. A sidebar describes divine conflicts that are generating temporal chaos, and thus provides the seed of a whole time-traveling campaign. (By the way, if you want pointers for a time-travel adventure, I just posted some over in Harbinger of Doom.)

Looking back across the editions, I think it fair to say that time-magic spellcasters always have an identity problem. The spells are there, the spells are interesting, but they don’t have a unified gameplay form. In this case, it’s a healer with a substantial sideline in buff/debuff casting. I feel like something doesn’t quite click here. In particular, a more robust first level would be good to see. There is a standard disclaimer, of course, that this could come together at the table in a way I’ve failed to anticipate.

Time wizard is just about as iconic a high concept as you could want. I’m not sure anyone who plays a wizard wouldn’t be potentially interested in that theme. With that said:

The Timekeeper, then, is a wizard that borrows some sorcerer tricks, and has Haste Lite on speed-dial. I feel like comes together pretty well. I’m not sure how I feel in principle about a subclass so closely aping a core class’s primary mechanic. I wouldn’t mind seeing more Metamagic options for sorcerers and sorcerous origins, adapted from the ideas found here.

This background is for people sent forward to the present, through whatever means.

The personality features are well-written, and call to mind a lot of different pieces of source fiction, up to and including Captain America. No complaints – this is a great background, top to bottom.

Accelerate is an alternative to haste, and also at 3rd level. It doesn’t do anything for your offensive output, but it targets three people. Calling it an improved, mass expeditious retreat is about right. When you have a need… a need for speed… this is a solid spell, but I don’t know that you’ll need that enough to spend a Spells Known or preparation slot on it.

Anomalous Object is an object-duping spell – literally a temporal conjuration. You have to be in contact with the original, and you can’t use this on sentient items or artifacts, but otherwise you could do all kinds of strange things with this spell. Damage or charge expenditure to the original or the dupe also applies to the other. A fascinating, inventive spell.

Chronal Lance is a three-target spell that reduces the targets’ speed and imposes disadvantage on Dex saves, if they fail their saves. This seems like a bane variant, but one that is harder to exploit tactically. This isn’t a great use of your spell slot and action, unless you’re losing a chase scene.

Decelerate is also a speed debuff, but it’s a rare stacking debuff – a single casting slows the target and keeps slowing them further, until their speed is down to 5 feet. The spell does nothing if the initial save succeeds, but once the spell takes hold, the creature has to spend its action to be allowed a save to end the effect. Otherwise, they’re hindered until the duration runs out. This feels like it could be an incredible tactical advantage if you have a ranged-heavy party; increasing the number of targets with higher-level slots also seems promising.

Quicken is a cantrip, not money-management software. It’s basically guidance but for initiative and Dex saves. This is probably not a good use of your Concentration most of the time. If you know you’ll be rolling a Dex save real soon, then sure, it’s nice to have… but all things considered, try guidance for the initiative bonus and bless for the save bonus. (In case I haven’t talked about this before, bless is one of the best things a cleric or paladin can do with their Concentration slot at many levels of play.)

Reset is an initiative-rearranging spell. I don’t think that I’ve ever seen a situation where rerolling initiative – even if your allies have advantage and your enemies disadvantage – looks like a good bargain for a 4th-level slot.

Time Step is like misty step, but with a 1-action casting time, and it actually removes you from the present until the beginning of your next turn. As a more extreme panic-button option, this is great to have, but it probably isn’t as commonly useful as misty step.

Time Loop is an incredible control spell that forces a target to repeat its sequence of actions each round. If that’s impossible for some reason (which is fairly easy to arrange), the creature is incapacitated. Now, there are numerous lower-level ways to achieve a comparable effect, but none of them get you the awesome Doctor Strange reference. (Uh, spoilers I guess.)

Time Vortex is basically temporal confusion, though it’s a zone rather than an effect that stays on the creatures in the initial targeted area. The random outcomes are cool except for the initiative-shifting one. In general, I don’t want initiative to move once it’s established at the start of combat. I understand why it would be a go-to concept for time magic, but I don’t think it plays well.

Wall of Time is not as good of a hard barrier as wall of force, and the duration is much shorter. It’s still total immunity to nonmagical ranged attacks, and it slows targets that pass through, so that’s impressive. Basically, this is the right spell if you still want to engage an enemy, but want them to do it more on your terms than theirs. I’d want to look at the whole array of wall spells, but I feel like dropping this down to 4th level might be okay.

Withered Sight is an unusual debuff. It imposes disadvantage on Perception checks and attack rolls, if the target fails the save. It should probably include “creatures that are immune to the blinded condition are immune to this spell.” It’s probably okay; I presume that it was benchmarked against blindness/deafness at 2nd level. This is less powerful, though still significant for a 1st level spell. Having no effect on a successful save is its chief drawback.

I like what I see in this document, though some parts work better than others. On the plus side, theme, artwork, flavor text, and clarity of meaning are all strong. On the other, the subclasses sometimes struggle to present a clear playstyle or party role, the spells are a bit uneven, and the formal rules language is sometimes not quite right for 5e. (In the unlikely event that you are unaware, 5e’s formal rules language is quite strict in its form.)

This is a great product if you’re already a Midgard fan (and I’m gradually becoming one, myself), and a good product if not. I’m rating it an 8/10.

How Do We Define Character Success?