A Closer Look at the Cartography of Christopher West 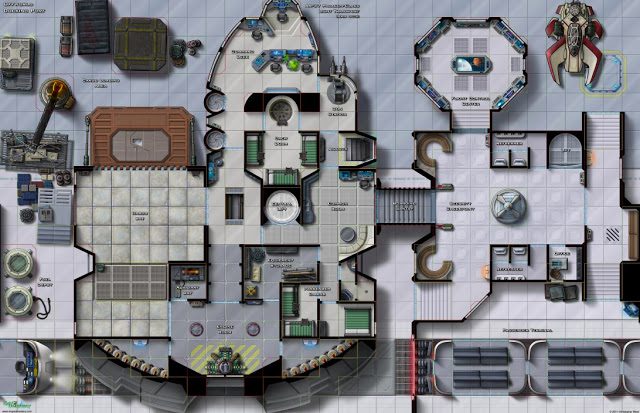 “Chris West loves gaming and expresses that love with an artist’s eye. Luckily for gamers, he shares that eye with the rest of us.”

Back in the olden days of roleplaying, maps were crude scribblings on graph paper, dictated to the players by the Dungeon Master. Mapping caverns by hand gave you a feeling of exploration; you used your imagination to fill in the details of the surroundings that the DM described. Unfortunately, not everyone at the table imagined those details the same way.

Arguments were common about who was where, what was in the room and how close that ogre was to the brazier full of hot coals. Savvy DMs and players slipped around the arguments and kept the game moving, but it was always the most frustrating part of a session. There are times that I miss those days, mostly for the nostalgia of making due with what we had. Well, the day has finally come where we don’t have to make due. We have Christopher West.

Chris West is best known for his work on the d20 Star Wars RPG and miniatures combat line, as well as both Wizards of the Coasts’ Maps of Mystery project, and Monte Cook’s multiple ENnie-winning Numenera RPG (including the 2014 ENnie for Best Cartography).

Chris currently works freelance for his own company, Maps of Mastery.

All Maps of Mastery (MoM) are double-sided, making them cost efficient; $14 gets you two, high quality, 22″ x 34″ poster maps. In addition, Chris includes a bonus 5″ x 8″ map tile on the reverse side of the package insert. These bonus tiles are designed to overlay a section of one of your maps to add detail, a genre-specific twist, or extra options. For example, the tile included for the Forsaken Lands series’ Swamp Caves map is of a crashed starship half-buried on the beach. The Swamp Caves itself is genre-neutral, but by adding the crashed starship you can give your sci-fi game the right feel.

Living in the modern age as we do, Chris also provides PDF bundles of his series. Each bundle includes numerous variants, versions without lines or text, additional tiles, and more, ready for use on Rolld20, or other virtual tabletops and sites.

All MoM are square 25mm (ie: 1″ = 5′) scale. The grid layout is subtle, often blended into the art itself instead of assaulting the eyes with bold black lines. Additionally, certain objects are outlined by thin red, yellow or green lines. These lines help players know what type of terrain the object represents. 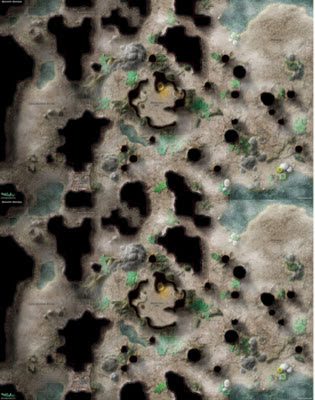 In addition to the beautiful art and design, Chris manages to pull off a feat I’ve never seen in gaming cartography before. The majority of the Maps of Mastery line are designed to link to other maps in the same series and, in many cases, to themselves. At first this may sound odd, why would you want two maps that look exactly the same next to one another?

Chris manages to create wild cave and wilderness maps that balance detail with a sense of natural randomness. Placing two Swamp Cave maps top-to-bottom [shown to the right] creates a maze of trees and passages that, though similar in design, provides a huge and satisfying playing field.

The sci-fi Cargo Docks from Mass Transit II manages the same trick. Even placing two of the larger, docked starships top-to-bottom, like the Strike Force Carrier, gives the feeling of a crowded Imperial military port. Combine all the maps from the Mass Transit series and you have a living starport ready for action. Your biggest problem will be finding a table to hold it. 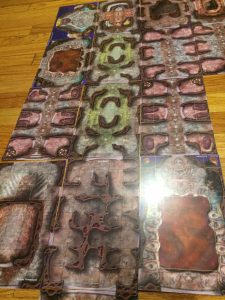 If you don’t want to pick up an entire series, I recommend one of his setting-neutral tile sets, like the Tunnels I & II or the Alien Starship.

How is an Alien Starship “setting-neutral”, you ask. Create a living Yuuzhan Vong starship for your Star Wars game, an enormous and terrifying artifact for Numenera, a psychotic incursion for The Strange, a flesh-lined hive for Call of Cthluhu, a villainous lair for a Champions or Mutants & Masterminds game, or a necromancer’s twisted hovel for D&D, 13th Age, Pathfinder or any other fantasy RPG.

I recently discussed another of my favorite uses for this set over on the Dungeon Master’s Block podcast as well.

If you are thinking of buying only one Maps of Mastery set, this is the one.

Chris West loves gaming and expresses that love with an artist’s eye. Luckily for gamers, he shares that eye with the rest of us. If the detail, variety and utility of Chris West’s Maps of Mastery rank them alongside larger companies like Paizo and Wizards of the Coast, their unique quality of linking together pushes his work over the top.