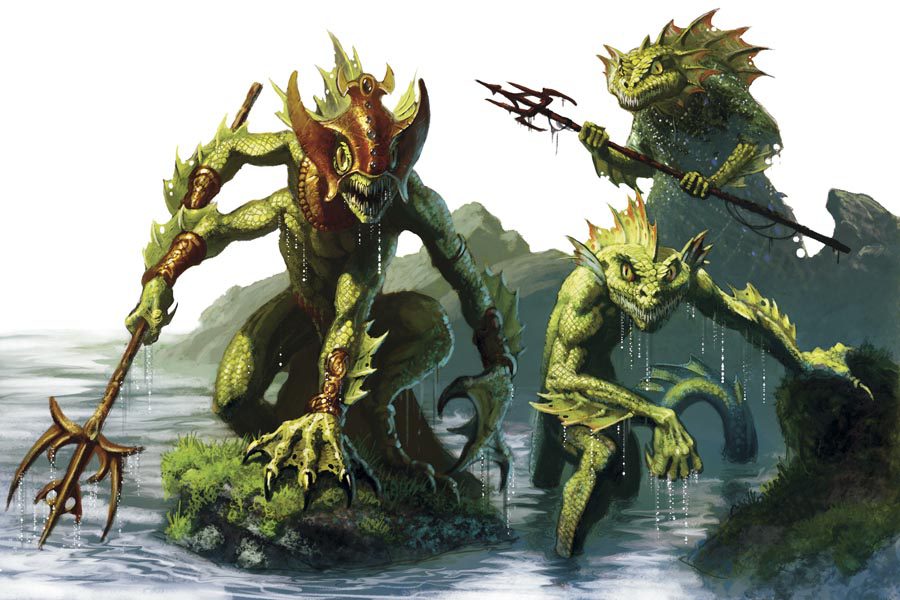 Looking to run an aquatic adventure of a full underwater campaign? Check out Under the Seas of Vodari.

Arrrh matey! Looking to have your adventurers walk the plank or explore a lost temple deep under the sea? We have you covered. Here is a list of 10 Awesome Monsters for an Aquatic Encounter from the Dungeons & Dragons 5th Edition Monster Manual. Don’t forget to check out Aquatic Monster & Hero Race Options if you are looking for new player options for your campaign.

NOTE: Since this was first published in October 2014 the Dungeon Master Guide was released and provides lists of Monsters by Environment (such as coastal or underwater) in Appendix B, but the lists are basic. In this article, you’ll find monsters that I think fit in an underwater setting and some ideas on how to create encounters with each of them.

Many undersea creatures are accustomed to the deepest seas and have resistance to cold damage and can ignore any of the drawbacks caused by a deep, underwater environment. For others, magic items and spells can provide the ability to dive into this deep and unforgiving environment. Those without protection from the frigid cold and crushing pressure of the depths may find death quickly. Consult the DMG for details on handling frigid water (page 110) and crushing pressure (page 116).

For characters looking to travel into deeper seas, the following optional rule can be used.

A character with a swimming speed and the ability to breathe water can comfortably travel to the deeps of up to 650 feet. Characters without the ability to ignore any of the drawbacks caused by a deep, underwater environment will find it uncomfortable to swim to deeper waters and have the following restrictions:

Tangle kelp is found in shallow waters at medium temperatures, ranging in size from dozens of square feet to hundreds of square miles. Areas of tangle kelp, a species of kelp that is especially likely to adhere to clothing, skin, or scales, are typically found as part of larger kelp forests. The tangle kelp itself occupies three adjoining 10-foot cubes. A creature can distinguish tangle kelp from other forms of kelp with a DC 15 Intelligence (Nature) or Wisdom (Survival) check.

A non-plant creature that enters an area of tangle kelp for the first time in a turn, or begins its turn there, rolls a DC 12 Strength saving throw. On a failure, the creature’s swimming speed is reduced to 5 feet until the start of its next turn.

Toxic species are usually soft corals that poison creatures through contact. A creature that touches toxic coral with exposed skin or scales must succeed on a DC 13 Constitution saving throw or take 3 (1d6) poison damage and become poisoned. The poisoned creature must repeat the saving throw every hour, taking 3 (1d6) poison damage on a failed save.

Artwork: Wizards of the Coast

Werewolf – Howl at the Moon!