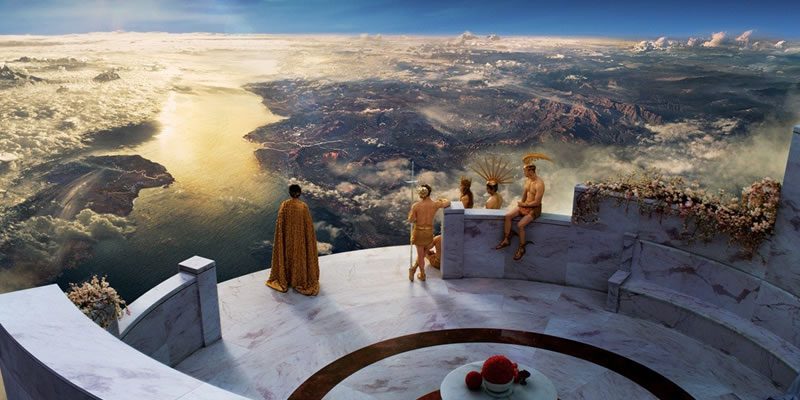 From Asgard to Zendikar, there are countless examples of richly imagined worlds in books, games, movies and television. My favorite fantasy worlds feel like a real working place. Your tabletop RPG adventures deserve an amazing setting that feels like a real working world too. Fully working out the details for the religions of your world is an important piece of building your world. Last year, I decided it was finally time to tackle building my own fantasy world and in this article (Part 3), I share how I came up with the details of the religions of my world.

When choosing gods for your world you could just take the gods from Forgotten Realms, Krynn or Greek mythology, boldly decide to tackle creating your own gods from scratch or mix and match between these two strategies. A fantasy tabletop RPG world without religion is another possibility, but you’ll need to explain why the world has no gods to your players (since a cleric with no spells = no fun) or come up with an alternative way to power divine classes. In Dragonlance, the gods seemed to have abandoned the world, but the faith of Goldmoon allowed her to become the first cleric of the goddess Mishakal in hundreds of years. Another consideration is that religion tends to vary regionally or even from family to family. You should set up a variety of gods with rivalries to match the world of your players at the local and regional level. A smaller pantheon with a few gods or even using monotheism is another possibility. You can even base religions in your world around anything including ancestor worship, natural phenomenons (like a floods, volcanos or earthquakes) or even aliens visitors being worshiped as gods.

Gods of Your World

Building out a world with religions can be a significant task, but the good news is that Pathfinder and D&D have a ton of gods for you to use or to borrow as templates for creating your pantheon. Since building Vodari was my first crack at playing god, I started small by customizing the typical pantheon you would associate with a Dungeon & Dragons game and adding a few gods of my own.

TIP: Religions need believers, benefits and routines. Try to provide details for each of your religions on how followers worship, where they meet and any festivals/ceremonies.

I wanted Vodari to be an epic setting where the gods played an active role and they often needed the help of heroes. I decided that three siblings would form the core gods in my world and scatter other gods from Dungeons & Dragons to fill in the pantheon. I just set out the basics of who the gods were and who followed them. I really neglected building out believers, benefits and routines for each god and I’m playing catch-up as we go (with some help from my cleric) during the campaign. I did build in a major festival for the most popular good and neutral gods into our calendar, which creates a nice backdrop as your players travel through your world.

When I first was thinking about the gods, I imagined a war between them forging the world.

Long ago Taeva and Vesi, two sister gods, fought a great war for the heavens when the Great Father died. After millennia of fighting, the war spilled over into Vodari. In order to save the mortals, their brother Tero stood between their two armies, begging for an end to the conflict before it destroyed Vodari. Listening to her brother, Taeva had her army stand down. Unable to contain her rage, Vesi created a massive storm that blasted her siblings without mercy and buried most of Vodari under the seas. Defeated and injured, Taeva retreated to the sky. Realizing the extent of the destruction she caused, Vesi withdrew into the vast storm she created to brood for eternity. Barely alive, Tero called upon the last of his strength to create the islands and watch over the survivors.

Here is my world’s pantheon. The most important gods to my players are the big three (especially Tero) and whatever gods are important to their race or domain.

Here is a list of the festivals I have come up with so far. I need to add a few more to fill in the calendar as we travel around the world and I plan on adding a festival to the list very shortly.