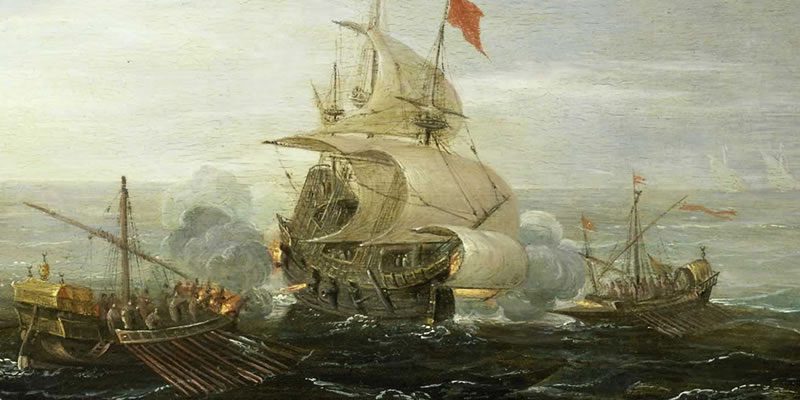 From Asgard to Zothique, there are many, many richly imagined worlds that have been created for books, games, movies, television and even just for fun. My favorite fantasy worlds feel like a real working place with their own currency, food, technology and magic. Last year, I decided it was finally time to tackle building my own fantasy world and in this article (Part 4), I share how I came up with details to make my seafaring world of Vodari feel more like a real place. Since this was my first crack at world building, I started small with just minor changes to the way a typical fantasy world works and added in a little gunpowder to allow for muskets and cannons.

When building out a campaign world, thinking about what people in the world call money can be a really nice detail. Currency has many names in fantasy and sci-fi settings such as Gil (Final Fantasy), Crowns, Units (Guardians of the Galaxy), Credits and more. Even if you settle on the old gold standard, nicknames for each coin can be a nice touch. Naming coins for the animal (real or monster) or person (king/queen of the land) they have minted onto a face is one way. Old names for coins can also be fun to use such as Groats, Sheckels, Farthings, Florins, Sovereigns, Guineas and Doubloons. For larger amounts, you might consider introducing bank notes, if some form of banking exists in your world. Whatever currency you choose, make sure it fits the setting and tone of your campaign and will actually work as an efficient method of exchange (complex math can be boring – really try to keep to a base 10 system).

The lack of money is the root of all evil.
~ Mark Twain 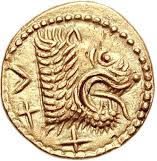 When building out my campaign world, I really didn’t see the need to mess around with money too much. I just decided to drop Electrum coins (ep) as a standard of exchange and stick with Platinum, Gold, Silver and Copper. I also like to use bank notes for larger amounts, especially if the PCs are being paid for a job by a public official. In hindsight, I wish I came up with nicknames for my coins that sound more pirate-like such as Doubloons, but I was worried a name like that would pull us out of Vodari and into Earth’s actual history. I’m thinking that I am going to have my NPC pirates call gold coins Doubloons, Crowns or something with more flavor.

A few things you can do to make the money of your world special:

Otik’s Famous Spiced Potatoes (Dragonlance), blue milk (Star Wars), snakes and monkey brains (Indiana Jones and the Temple of Doom) or the replicator from Star Trek are all examples of food being used to make a world feel real. It’s easy to just have your players eat “food”, but it can be more. Describe the food and even create something unique and exotic that is only in your world. Make it part of the story like coconuts on Gilligan’s Island had coconuts or Breaking Bad’s Los Pollos chicken.

My players started out on in a small town, on a small island called Faraway. The island is famous for its stinky, barbed, rust colored fruit, called a Dragon Pear, that grows in orchards outside of the port town. When my players had to visit their first tavern I called it the Rusty Dragon, named for the fruit. Can you guess what the tavern’s signature dish is? It’s fried dragon pears and they taste awesome! Just a couple of details about a fruit and my world has some real details.

As my players travel around in my world…

Your players can make food memorable too. Allow them to hunt and be specific about what they catch. If they kill a beast in a fight, why not eat it. When my players killed a giant crab, they cooked it and then ate it during a short rest. I think one of the players even had their PC carrying spices to make food on the road taste better.

The level of technology in your world, or even from land to land, is a dominate factor in the way the world works and how the campaign feels. Who has the best technology can also be a major story arc in your campaign. Which side has the death ray, atomic bomb, Death Star or whatever can be the entire focus of your PCs efforts. The level of technology and theme are both  something your should really consult your players about. If your players are excited about playing in a world of sword and sorcery and you start introducing steam powered air ships and paddle boats, that is a major miss. But you need to be able to create a world that both you and your players can enjoy. If you are lucky, you’ll have players who can help you come up with a theme for your campaign that everyone can enjoy.

When I was starting to think about our next campaign, we were running a game set in the Nentir Vale and our group was looking to move away from goblins, kobolds, gnolls, orcs and red dragons. I looked at Guardians of the Galaxy, Maleficent, Hunger Games, Star Wars, Star Trek, Firefly, Van Helsing, Three Musketeers, Zelda, Pirates of the Caribbean, Aquaman, Legend of Korra and more for ideas. A few pages of notes later, I was able to present the following campaign ideas to my players:

As a group we decided that letting me build out a world where a small continent was destroyed leaving scattered islands that the few survivors of this cataclysm colonized. Our swashbuckling adventures in the Seas of Vodari are set in a world with a technology level similar to that of the Renaissance. I started to develop a world with gunpowder (for cannons and muskets) and a little steam power being used by the rock gnomes in their far off island kingdom.

Once you set the level of technology for your world, you’ll need to provide that technology to your players. Since my world was basically a default D&D 5th edition world with gunpowder, I only had to create and borrow a dozen items to provide our unique mix of technology directly to my players. I also has to add boats and a combat system, which I am covering in my Naval Combat series.

Here is a list of what I created or borrowed from D&D/Pathfinder. Stats provided are for D&D 5th edition.

As much as the technology level of your world can set the feel of the entire campaign and shape empires, magic can be used as an even more powerful force to wield. Magic can give people the power to heal and build or kill and destroy. Like technology, it can be a blessing or a curse. For my first world building exercise, I decided that leaving magic alone would be a really great idea. However you decide to use magic in your world, you’ll need to think about the following:

Next week I’ll cover look at how to create a detailed geography for your world.