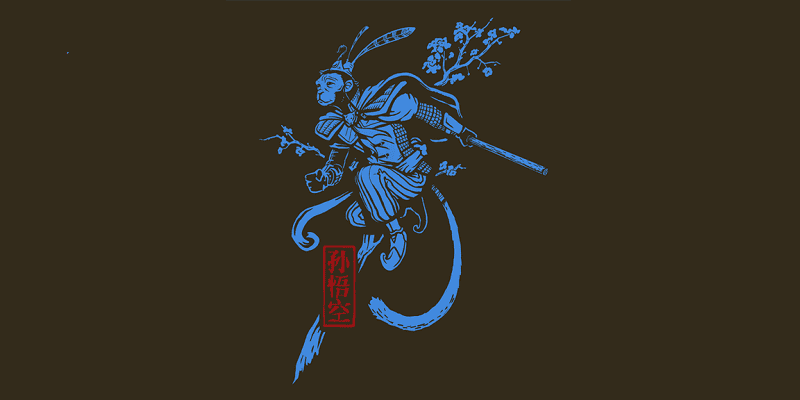 This week I bring the Vanara race to my Wuxia Campaign.  The inspiration was watching Wuxia movies a few months ago about Sun Wukong the monkey king.  With a little reading, you can find Vanara were in Oriental Adventures and continue to be in Pathfinder. So it seems like a good time to introduce them to the players.

Vanaras are intelligent, monkeylike humanoids that live in deep, warm forests and lush jungles. Their bodies are covered with light fur, ranging from white through light blue to brown and black. Despite their fur, vanaras can grow lengthy hair on their head just as humans can, and both male and female vanaras take pains to wear elaborate hairstyles for important social functions. The hair on a vanara’s head matches the color of its fur. Their faces are distinctly monkeylike, with protruding muzzles, furred cheeks, and wide, lipless mouths. They have long, semiprehensile tails, long fingers and toes, and large ears, but their arms, legs, and torsos are proportioned like those of humans.

Vanaras are often viewed with amusement or even exasperation by members of other races, who find their personalities childish and irritating. They are curious in the extreme, frequently badgering people with questions (sometimes very personal questions), picking small items up to examine them, opening doors to see where they lead, and generally exploring places where the human sense of propriety and order would demand they not go. They also tend to be bluntly honest, never couching a negative opinion in gentle terms or hiding their true feelings about anything. At the same time, they are incredibly loyal, quite brave when the situation requires it, and genuinely kind.

Vanaras are very fond of humans, admiring them and respecting their power while laughing quietly at their conservative stodginess. They get along well with other good-aligned races as well, as long as the other race will tolerate them. They loathe evil, however, and their opinion of an entire race or kind can be soured by their experience with one wicked individual.

Vanaras dwell in deep forests and high mountains, building their villages and towns in such a way as to make a minimal impact on their natural surroundings. They gather in loose clans, but do not keep track of kinship at all, so “clan” is a very loose term for their associations. They subsist largely by hunting and gathering, rather than farming the land. They rarely come into contact with other races, and do not seek them out.

The vanaras revere the greatest of the nature spirits—spirits of the sun, the highest mountains, the oldest forests, and the widest rivers. They revere these spirits with deep personal devotion, offering prayers and songs to these deitylike beings at least daily.

The arrival of a human or a member of another race in a vanara community usually sparks a rash of vanara adventurers, as young vanaras—curious about the foreign society from which the visitor came — venture forth to learn about the wider world. Vanara adventurers often attach themselves to humans, following them with tremendous loyalty and devotion.

A vanara receives a name within a week after birth, as soon as the parents observe some sign or portent that suggests an appropriate name for the child. The vanara keeps this name through life, and considers it shameful to use any other name, such as a nickname or honorific.
Male Names: Amanu, Khanu, Mindra, Rava, Thetsu, Vaki, and Vindu.
Female Names: Aki, Kiri, Ghuna, Lakshi, Sitha, Tani, and Vina.

Your vanara character has traits that differentiate them from other races. Vanaras are agile and insightful, but are also rather mischievous.
Ability score Increase.  Your Dexterity and Wisdom scores increase by 2.
Age. Vanara age similarly to humans and reach adulthood in their middle teens, but can only live to about 80 years.
Alignment. Vanaras are strongly chaotic but equally strongly good. They show little or no respect for social mores, rules with no purpose they can understand, or codes of discipline, and hate tyranny and oppression. Their only concession to social order is their acceptance of caste systems. Their religion
allows for the possibility that different divine gifts might be given to different people, although it rejects any different valuation of those gifts. Vanaras, therefore, might respect that religion is the province of the priestly caste among humans, but do not necessarily accord that caste the respect and veneration human priests might expect.
Size.  Vanara average 5 feet tall and weight about 110 pounds. Your size is Medium.
Speed. Your base walking speed is 30 feet. When climbing you climb faster than normal, and climbing doesn’t cost extra movement. When you make checks or saves when climbing is involved, you have advantage.
Darkvision. Accustomed to twilit forests and the night sky, you have superior vision in dark and dim conditions. You can see in dim light within 60 feet of you as if it were bright light, and in darkness as if it were dim light. You can’t discern color in darkness, only shades of gray.
Acrobatics. Vanaras are agile and athletic, climbing, leaping, and swinging in trees.  You have expert proficiency in the Acrobatics skill.
Jumping. When making a standing long jump, the distance you can cover increases by a number of feet equal to your Dexterity modifier.
Stealth. Though they enjoy making noise, vanaras can be very stealthy when the situation demands it. You have proficiency in the Stealth skill.
Prehensile Tail. A vanara has a long, flexible tail that he can use to carry objects. He cannot wield weapons with his tail, but the tail allows him to retrieve a small, stowed object carried on his person as a bonus action.
Languages. You can speak, read and write Common. Vanaras speak Vanaran, but it is written in the Common script. Humans complain that Vanaran sounds like nothing but screeches and chattering, but it is a complex and subtle language.