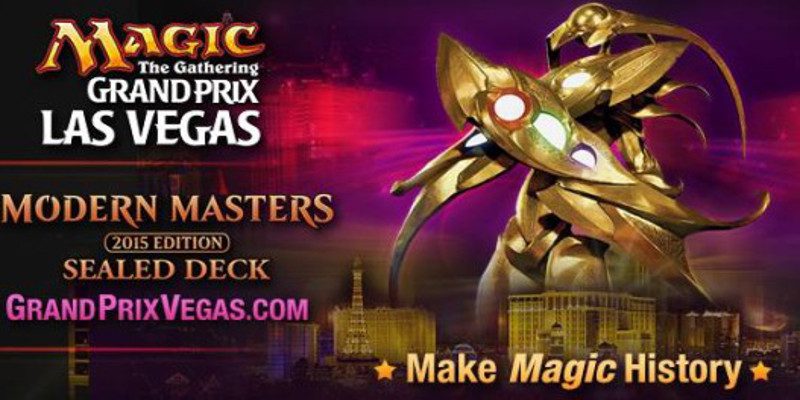 Instead of writing about D&D, I’m doing something special. I attended GP Las Vegas (MAY 28-31, 2015), the biggest card tournament (by far) ever held. I stayed there from Thursday until Sunday, and I thought I would share my experiences playing Magic: The Gathering in a crowd of more than 8000 people.

I stayed up all night Wednesday to make my 6 am flight on Thursday. A mistake, it turns out, because the flight got canceled and my party and I had to wait 11 hours to get on board a new flight to Vegas. We were not pleased, because it meant we missed much of the side events. The main tournament didn’t start until Saturday, so we weren’t late for that, but we had other things we wanted to do that day. We arrived, tired and upset in the hotel, only to be offered 3 different rooms before we found a clean, unoccupied one. Frustrated, we all went to bed immediately, no Magic having been played on our planned Day 1.

I was up in a flash on Friday, eager to eat breakfast and get down to the tournament hall, only to arrive an hour before the hall opened. Here is what the hall looked like while we were waiting: 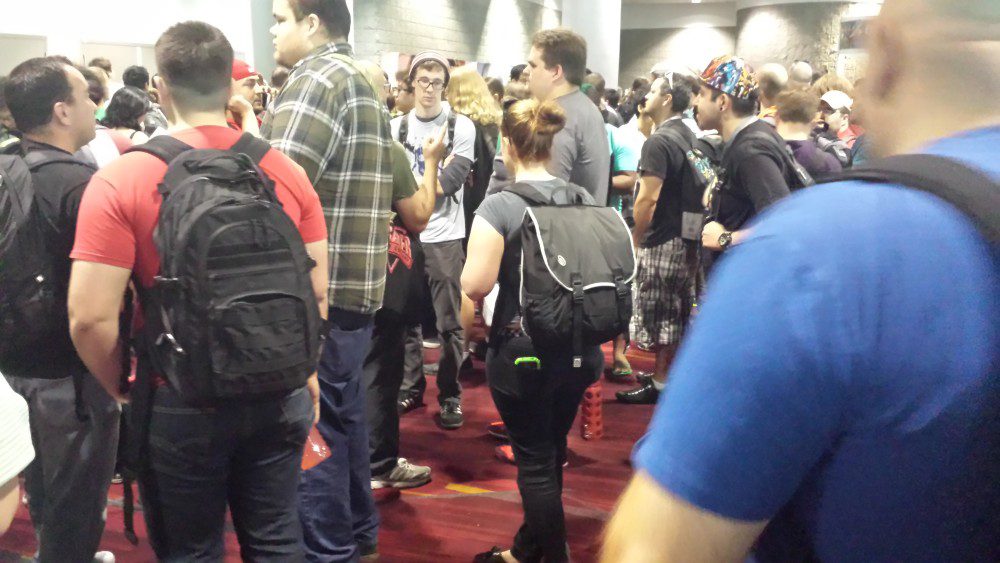 Such is the life of an over eager Magic player, I suppose. Once I got in, I immediately rushed to go enter a “grinder” side event. This is a 32 man single elimination tournament, where the winner receives two byes, or free wins, in the main event tomorrow. As I had no byes, I was very excited to earn some, and get some wins ahead of the crowd. The format was Modern Masters Sealed, so I opened 6 packs and made a deck with them. I was disappointed by the lack of lands and fixing in the packs, as it meant I could only play two colors. This meant that I could not play all of my powerful cards. I did, however, open the mythic rare and expensive card Emrakul, the Aeons Torn. Here is what my 40 card deck for the tournament ended up looking like: 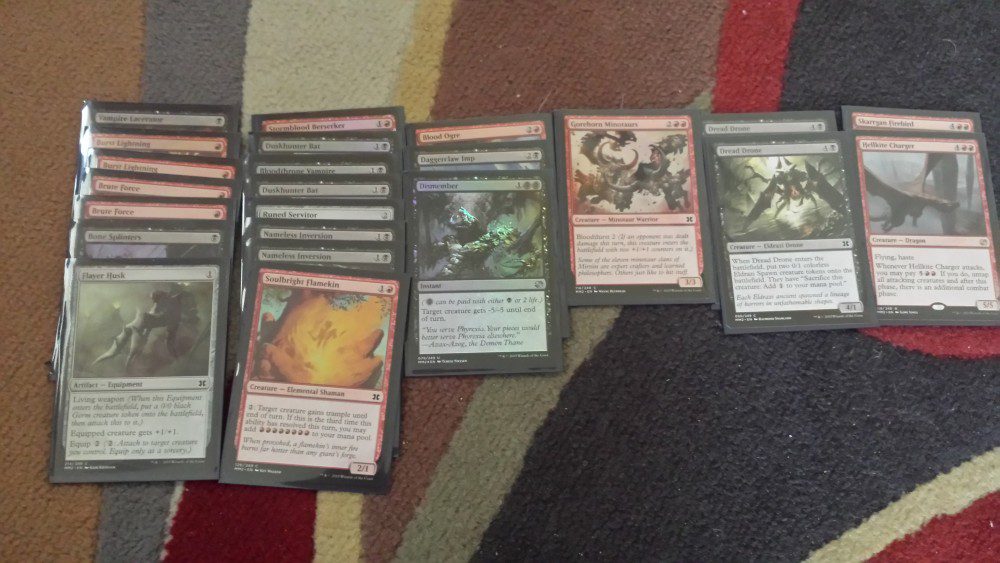 To my surprise, my first round opponent didn’t show up, making me 1-0. I lost the first game of round 2, which began to put the hair up on the back on my neck. I already wasn’t very happy with my aggressive red/black deck, and I almost got tilted from losing my first real game of the day. However, I rallied and managed to beat my opponent with a 2-1 score for the first round. Relieved, I packed up my stuff for round 3. The following 2 rounds passed in a blur, with my deck quickly defeating my opponents through a combination of luck and good matchups. To my surprise, I found myself the last man of 32 standing undefeated, and I happily took my 12 modern masters packs, my 2 byes and my 25$ refund for winning. Afterwards, we went and ate some dinner and my friend went off to play slots. I quickly fell asleep, preparing for the big tournament tomorrow.

Today was the big day, so to speak. I arrived at 8:30 with a friend, only to realize that I had 2 byes and a sleep in special and I didn’t have to show up until 11:30. So, I spent the time preparing myself, eating and using the restroom, drinking plenty of water. I wasn’t about to throw my games or lose time building my deck because of bodily functions. We entered the deck building portion, and to my exasperation, I still had a deficit of lands allowing me to play multiple colors. However, I had one Rakdos Carnarium and a Wayfarer’s Bauble, as well as a Fiery Fall to fix my mana, so I shrugged my shoulders and made a 3-color fliers deck. Here is what the end result looked like: 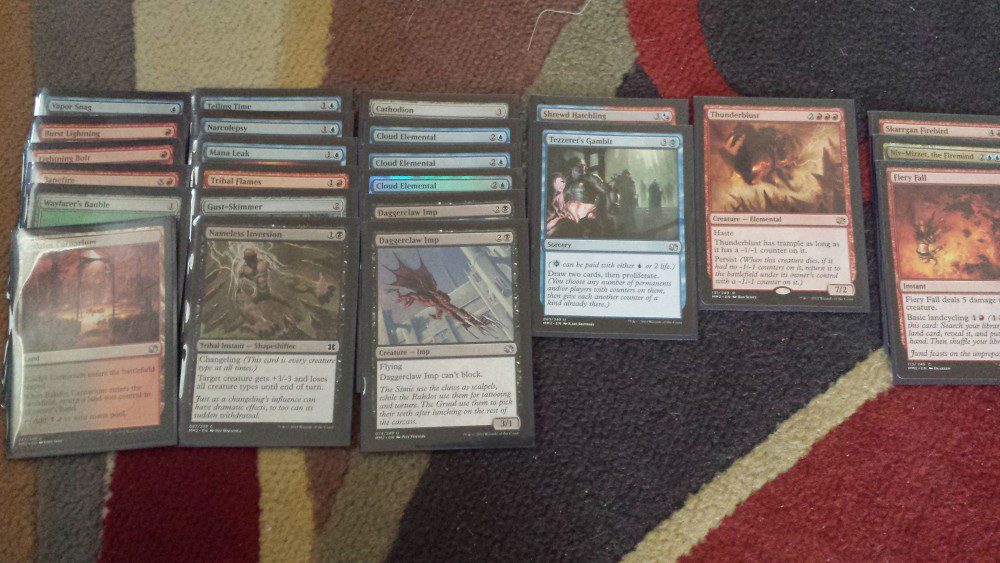 I entered round 3 with some trepidation, but was pleasantly surprised by how weak my opponent’s deck was. I quickly flew over the head of his threats, while using my plethora of removal spells to hold him at bay, putting me up to a decisive 3-0 on the day. I was also able to sweep up my fourth round opponent with little trouble, confirming that my deck was doing its job quite well. I hadn’t felt very far behind at all in those games, and my deck was drawing well. That all fell apart in the sixth round, where I played against a very good, albeit rude opponent. I always have to have one opponent who is “all business” at these events, but they can be a hassle to play against. He managed to defeat me handily, which soured my otherwise pleasant mood, putting me down to 5-1 on the day. My sixth opponent, in contrast to the former one, was extremely pleasant to play against. A Japanese man named Taka, he had a powerful deck, but was very funny and happy-go-lucky, even when he was behind. I enjoyed our match greatly, more so because I won, but I think I would have had fun regardless. My eighth round, I was ahead in game one, feeling confident, until my opponent played the insanely powerful Elesh Norn. I could not defeat such a powerful card with the tools and my disposal, and he quickly mopped me up. The second game was a similar affair, where I felt like I was ahead, only to face down an Apocalypse Hydra. I sighed, and dropped to 6-2. Now, in order to make the cut into day 2, I would need a record of 7-2 or better. This meant I had to win the last round, or else I would have had played 7 rounds of magic for nothing. This was obviously not going to make me a happy camper at all, so I played my heart out. To my surprise, my opponent’s deck was awful. I don’t know what cards he didn’t show me, but the cards he did were too slow and had no chance against my deck. I dismantled him in the easiest round of the day, but I felt sorry for keeping him out of day 2. He seemed extremely disappointed, a feeling I can sympathize with. I went back to our hotel and fell asleep as soon as the fog of excitement lifted from my mind – I had made it into day 2 of competition.

This day started “promptly at 9” according to the judges, so I showed up at 8:30, only to not start drafting until 9:30. Drafting is the format for day 2 limited grand prix, so we had more control over our decks, as we actually got to make them out of packs that rotated around the table. I took a number of lands early, trying to keep myself open, but didn’t get the sunburst cards to support the four-color archetype. I ended up in a blue-green deck splashing black and white off 5 bounce lands. Here is what it looked like: 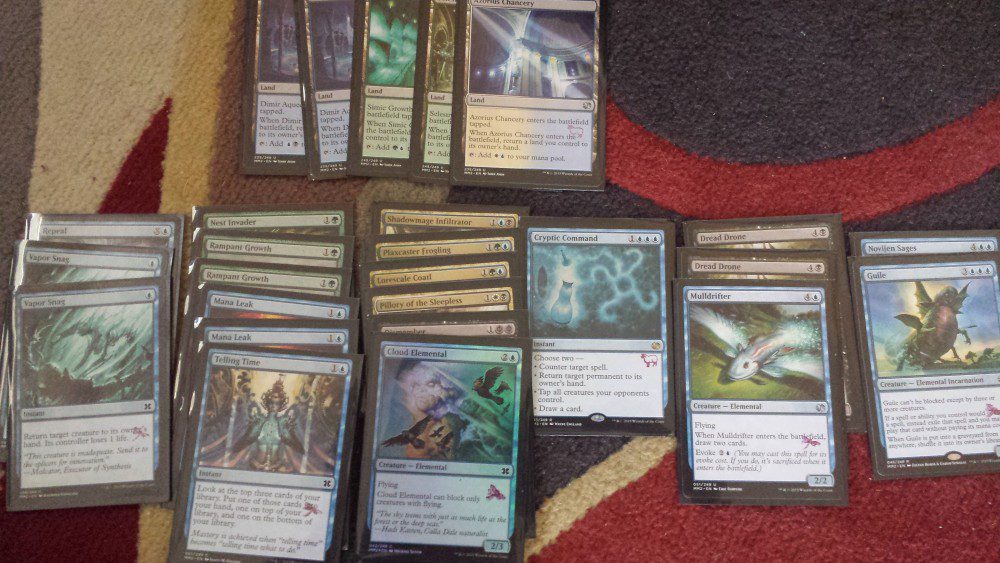 I lost my first round, putting my out of contention for top 8, but I won the next two rounds, and I was over all quite happy with my deck. It performed out of its league, and we sat down to draft a second, and final time. Now, my draft was insane. I opened the powerful, and expensive Vendillion Clique, only to be passed another one in the second pack. My deck ended up being very, very good. Take a look: 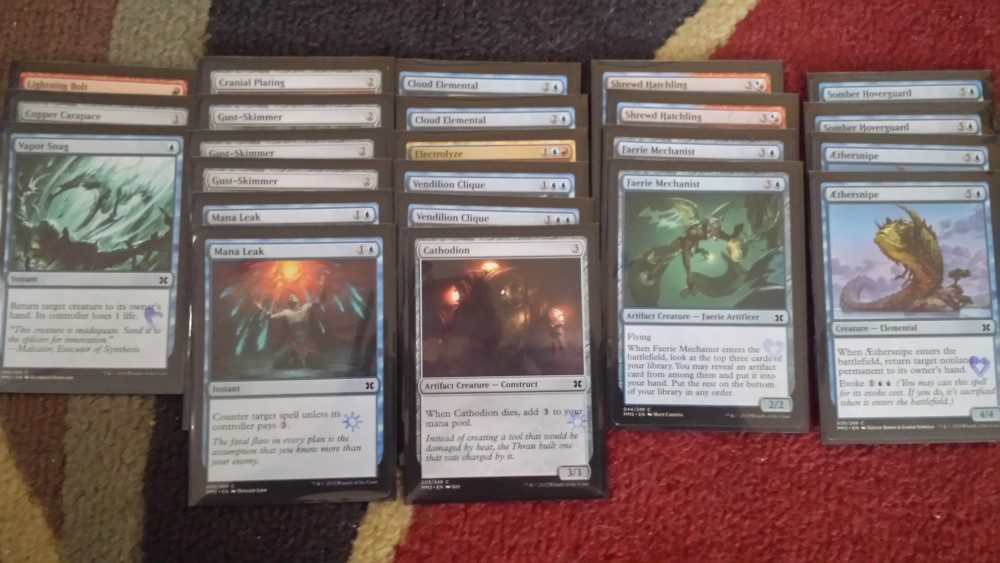 I would have taken this deck again at any grand prix event. I played the first round against Owen Turtenwald, a platinum pro player and one of the best magic players currently playing the game. However, after losing game by the skin of my teeth, I managed to defeat poor hands from the high level pro in games 2 and 3, earning me my first lifetime victory against a real pro player. I was ecstatic and I was very, very proud of my deck. And so, life turns our joy into ashes in our mouths, for I lost the next two rounds to an extremely frustrating combination of bad luck and my opponents having equally powerful decks. The games were nail bitingly close, and I was very disappointed with this deck going 2-1, leaving my final record as 10-5 for the two days. I felt I could have easily gone 12-3, or 11-4, but my frustration was slightly abated by the fact that 11-4 wouldn’t have increased my prize money in the slightest. I ended up winning $200 for my 191/3683 place. (The GP was split in two tournaments, so there was another one of this size with winners and losers on the other side of this room.) Overall, the event was fantastic. There were easily over 10,000 people, including judges, vendors and spectators, on Saturday, and it was a piece of gaming history I was a part of, and one I’ll never forget.