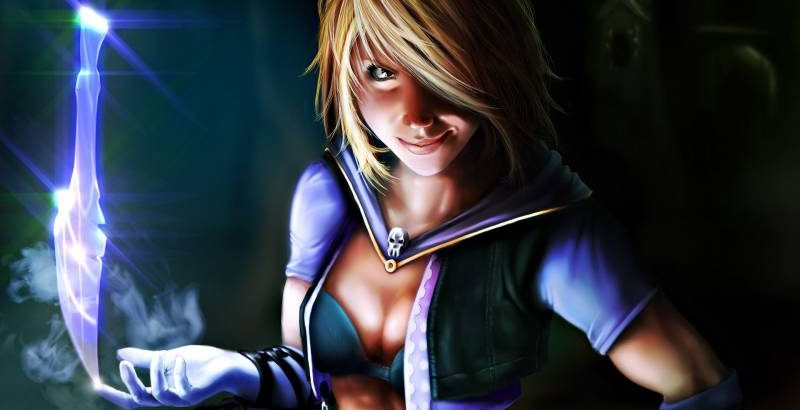 One of the most infamous entries in the D&D magical item catalog is the intelligent weapon. Most frequently a sword or dagger; these items have been imbued with personality, understanding, the ability to think and reason, and even magical powers. They are, in all but body, an NPC and their frequency should be extremely rare as their impact on the game can be monumental.

From a legends and lore standpoint, intelligent weapons are often created when a person’s or being’s soul is placed within them. The source of the soul can be quite varied and some examples would be elves, dwarves, humans, orcs, angels, demons, devils, demi-gods, elementals, and even spirits/beings from the other planes. Also, in order for the transfer of such a powerful thing as a soul to be placed within it, the weapon must be of the highest quality and already hold impressive magical powers. That is why when you encounter intelligent weapons you will rarely find them within a simple +1. In fact, a +3 or higher with more than one special ability on top of the intelligent aspect is not uncommon. In short, they are among the most epic weapons/items available in the game.

With that being said, you might ask the question: what is the purpose of an intelligent weapon? Despite the fact most players would be overjoyed to have such an amazing item in their possession, or at least they should be, there are several ways a DM can get the most mileage from an intelligent weapon. Here are five of the best ways I can think of to put one to good use:

The Intelligent Weapon as a Signpost

Sometimes players get stuck, or lost, or have a decision making crisis within the storyline. Maybe they have lost track of the options available to them or maybe there are too many options to choose from. And occasionally a story tangent veers them so far off course that they need help getting back. This is when the DM should throw out a lifeline and I call these “signposts”. Signposts often take the form of an NPC or the discovery of something new that reminds the players as to their true purpose. As far as intelligent weapons are concerned, using them as a signpost is effective but can lack substance unless they are weaved into the story in some larger way. As I said before, these items should never be offered to players lightly so using one to push the players in a certain direction will require planning. I suggest planting one within a treasure horde or perhaps rescuing one from an evil creature. After the players have it, they are eventually reminded by the weapon that they have work to perform somewhere else in the world as the weapon feels a disturbance in the weave or senses impending doom. This can also be turned on its head later on because it could be revealed that the weapon is actually of evil alignment and has purposely lead the heroes into a trap.

The Intelligent Weapon as a Mentor

At some point you might have the notion to give your players a mentor or a teacher to take them to the next level or stage of development. Of course, sending in an NPC is always an option but all NPCs come with a certain amount of logistical problems. Where does the NPC come from? Where will he or she go after they have bestowed what knowledge they have to give? What does the NPC do when the players go adventuring, and if he or she tags along, how much help do they provide? The answers to these problems will have significant impacts on the game dynamic and must be handled with care. However, one solution to these problems would be to make the intelligent weapon the mentor. After all, the weapon could be just as knowledgeable and helpful as an NPC; it doesn’t need to sleep, eat, or take up extra body space; it can always come along for the adventure without being in the way or taking up combat rounds; and what happens to it in the end is completely in the hand(s) of the player(s). I’ve personally never used this option as of yet but it has been on my list of things to try for years.

The Intelligent Weapon as a Trickster

Every so often a DM wants to throw a little wrench into the player’s plans. Not with the intention to hurt or punish them but often to set them back a bit and cause a little chaos. This could be to throw the players off the trail when they are getting a little too close to realizing the DMs true intentions or it could also be a playful distraction after a series of serious sessions. Whatever the reason, a tangent may be in order and that might be an excellent opportunity to throw the group a major curve ball. Just as some intelligent weapons might be described as good or evil alignment; it is also possible to have intelligent weapons that are both sane, insane, or a little of both. On this point, I’m thinking about an intelligent weapon that might want to force/convince the player to do things and say things that he or she might ordinarily shy away from. Maybe it starts out as harmless pranks and eventually builds into more dangerous situations, along the lines of the Joker from the DC Universe or Loki from Shakespeare’s A Midsummer Night’s Dream.  Of course, eventually blending these tricks and pranks so that they further the larger storyline is always encouraged.

The Intelligent Weapon as an Antagonist

I have found that this use for an intelligent weapon is often the most effective. Generally the story goes something like this: player finds a weapon of incredible quality and magic, player begins to use the weapon on a regular basis, slowly the character begins to change for the worse, the PC’s alignment shifts, their attitude shifts, and suddenly the PC is doing things and saying things completely against their original nature. Then, at some predetermined point in the storyline, the weapon often takes over the PC completely and he or she becomes a secondary, or in rare cases the primary, villain. Of course this will force your player to give up on that character and create a new one, but the sacrifice makes for great drama and wonderful roleplaying. Part of the campaign then becomes an attempt to redeem the wayward PC and attempt to bring him or her back to party. How that works out is completely in the hands of the DM.

The Intelligent Weapon as a Character Changer

This is similar to the option above but with a few key differences. In the past, I have gone so far as to offer a player a completely different character via the magic of an intelligent weapon. Maybe the player isn’t happy with the class that they have chosen, or maybe they want to be more of a melee class than they originally planned, or it could even be that they just want a new personality that does not fit with the old character. Not to say that I always give into the wants and discontents of my players, but I have on occasion allowed a character change based on this kind of magic. Not unlike an evil weapon taking over the PC and changing their nature, this option allows the PC to be taken over by a powerful hero that has been trapped in the weapon, sometimes for centuries, and can change their class, background, skills, and personality. The change is almost always permanent, even if the weapon is somehow lost or destroyed at a later date. I have also, on just one previous occasion, allowed the PC to develop multiple personalities due to this coupling. I cannot say that it was a huge success at the time, but I’m sure there are lots of excellent roleplayers out there that could pull it off.

In what ways have you used intelligent weapons in the past? Please comment below!