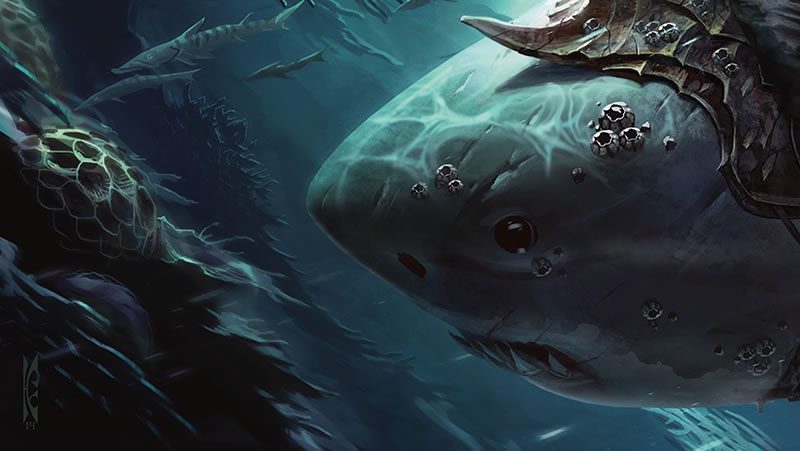 In this series I will be presenting creatures you can use for villains, lieutenants, minions, and wild encounters for 5th edition aquatic games, as well as encounter seeds for these villains at each tier.

This week I bring you aquatic encounter ideas for parties of 6th through 10th level characters. You can find lists of the villains, lieutenants, and minions referred to in the associated Enemies 6th-10th level post.

Unlike surface cultures, aquatic races rarely bury their dead in the ground. Civilized races that gather in large underwater cities sometimes create necropolises from coral reefs and atolls, ritually weigh down bodies to drop into drenches or the Deep, or wrap bodies in organic cocoons and float them in seaweed forests until they decay. Though the first and last options create versions of graveyards that can be manipulated by negative energy the same as surface graveyards do, crevices on the edge of large settlements or trenches that have been used by nomadic cultures for hundreds if not thousands of years to bury dead provide a dangerous amount of material for necromancers and aberrations from the deep.

Though there are no undead directly on the list, it is easy to create a mid-level undead spell caster by using the Archmage NPC and adding the following abilities. Also, increase the CR of the archmage by 1 if you use these options:

Drink Death. When a creature within 30 ft of the undead archmage is reduced to 0 hit points, the mage can use its reaction to heal 20 (4d10) hit points.
Empower Undead. All undead allies within 30’ of the lich cleric are affected as if by a bless spell.
Unnerving Gaze (recharge 5-6). As a bonus action, the undead archmage can force all living creatures within 30 feet to make a DC 17 Wisdom save or become frightened for 1 minute. The creatures can make an additional save at the end of each of their rounds to negate the effect.

Though one of the most iconic villains of D&D, aboleth are rarely used to their full potential. Cthulhu-like horrors from the deep, aboleth have vaunted positions in the history of many campaign settings. Pathfinder’s Golarion tells tales of the aboleth empire going to war with the ancient human Azlanti, for example.

Their introduction in the 5th ed Monster Manual says it all:

“Before the coming of the gods, aboleths lurked in primordial oceans and underground lakes. They reached out with their minds and seized control of the burgeoning life-forms of the mortal realm, making those creatures their slaves. Their dominance made them like gods. Then the true gods appeared, smashing the aboleths’ empire and freeing their slaves.”

Though much is made of the aboleth’s numerous slaves, the largest members of their armies were a race of mutated humanoids called the ulat-kini, commonly known as skum [see the Enemies post for both a monstrous stat block and a playable PC race of ulat-kini].

The core aboleth presented in the various Monster Manuals is an impressive creature, but if you are looking for even more options for these ancient and terrifying creatures, check out Rogue Genius Games’ Monster Menagerie “Horrors of the Aboleth”.

Aquatic yuan-ti combine the appearance of sea snakes with that of merfolk, but otherwise have a similar history of serpentine worship and transformation. The yuan-ti and naga are the players in a centuries-old series of skirmishes that, at times, explode into war.

Per their entry in the Monster Manual: “Spirit nagas live in gloom and spitefulness, constantly plotting vengeance against creatures that have wronged them- or that they believe have wronged them. Lairing in dismal caverns and ruins, they devote their time to developing new spells and enslaving the mortals with which they surround themselves. A spirit naga likes to charm its foes, drawing them close so that it can sink its poisonous fangs into their flesh.”

Marids are a type of genie that hails from the elemental plane of water. They are arrogant, boisterous, tellers of tall tales (typically involving themselves or their ancestors). It is extremely rare for a marid not to claim some form of royal title as they hold themselves above all creatures, including other genie. Marid are known for their elaborate mansions, filled with slaves of the highest quality (that they care very little about outside of their ability to grant status).

The archmage humanoid NPC in the back of the Monster Manual is an excellent template for any humanoid race. With a few tweaks to its spell list or special abilities, the archemage can be an archetypal necromancer, a summoner tied to the elemental planes of earth or water, or a powerful illusionist looking to rule through misdirection and fear.

In many campaign worlds, and in the material provided in the 5th edition Monster Manual, the giants once ruled the planet through brutal wars with the dragons. Behirs are said to have been created by the giants as both pets and weapons against the giants’ hated foes. Though storm giants are chaotic good by nature, that does not mean that 1) a good creature can’t be an antagonist and 2) that the nature of an individual might override the racial tendency.