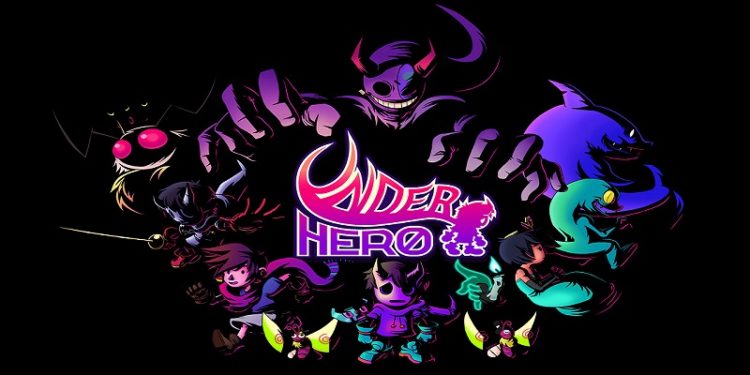 (Author’s note: this review is based on watching a playthrough of Underhero game; I did not play it myself.  However, because the game is neat, I thought the game developers could use some props for their hard work, that’s why I’m doing this review. Because I just finished this review, I’m publishing it now — but starting next week, I’ll resume my regular Monday postings.)

The blurb from ‘Underhero’ website states [in part]: ‘Underhero’ is a 2D side-scroller RPG adventure game with timing-based combat from indie developer “Paper Castle games.” It tells an intriguing and mysterious story, full of silly characters brimming with personality, quirky dialogue, and lots of weird humor. Inspired by Paper Mario games and RPGs in general, it tells the story of a world where the chosen hero has failed, and an unnamed masked underling of the main villain takes the hero’s place. The new “hero” who journeys across the Chestnut Kingdom to once again, defeat the evil Mr. Stitches! Meet friends, foes, and other weird characters in the mysterious world of Underher0.

((Because we never find out whether the unnamed kid “hero” is a male or female, so for simplicity’s sake, I’ll be using male pronouns.))

Underhero is a great game that uses its stage design, main gameplay, enemies, dialogue and plot to great effect. By looking at what it does well, we can learn a few things on how to plan things for our tabletop games. Read on:

Despite the game’s stages being pretty generic, the developers took some time to add interest to them by changing little things.

The first stage is a field in which a giant tree sits. Because the new “hero” never learned “wall jumping,” he ends up doing a series of “fetch quests” which ends up flooding the tree with alcohol allowing him to swim his way up to the top to battle the boss.

The second stage is neverending winter complete with howling winds that prevent you from using your hooded cloak to glide. You eventually procure the help of a disembodied hand carrying a candle to help battle ghosts that are everywhere. Discovering you need three trinkets.  To reach the boss you collect them all. Eventually, you end up at a party whose guests just so happen to be ghosts. As the hero gets the last trinket, he gets confronted by a rival who he has to defeat to advance.

The third stage is a volcano stage, complete with a savage tribe who make those they capture fight to the death. The stage prominently features whirlpools to get around to various parts of the stage and a hunt for spicy peppers to defeat the boss at the level’s end.

The game’s main gameplay throughout most of the game is a “classic” side scroller and platformer in the vein of Paper Mario. There isn’t too much new here, jump on platforms, encounter enemies. Don’t touch the spikes. Solve the puzzles of getting from “here” to “there.” Interestingly enough, you can’t fall to your death in most places in the game because your cape allows you to “glide” to a safe area.

Where the gameplay is different from traditional side-scrolling platformers, is that the hero has a stamina bar. Each type of weapon the hero uses takes different amounts of stamina – but also does differing amounts of damage. For instance, the sword takes three or four stamina but is fast and is a relatively weak attack, the hammer takes seven stamina but is slow and does considerably more. As long as the stamina bar has enough points in it, the hero can continue to attack. Even though enemies’ stamina bars are hidden, it’s apparent that the enemies have the same types of limitations as well as they need to take a break from attacking. Stamina for the character is replenished by blocking, jumping over attacks, or ducking under them. The game makes it relatively easy for the hero to dodge attacks because the enemies provide “hints” as to what they’re going to do – though these hints can (and do!) change.

Even though it’s not accessible at first, there’s also a “rush mode” the player can enter and exit at will after it becomes available. During this mode, the hero continually makes attacks without imputing the command, which slowly drains the stamina bar. During this mode, it’s basically impossible to miss. Simultaneously, it slows the enemies so they can’t attack quite as often. A useful strategy is to enter rush mode, let the stamina bar drain all the way, dodge or block a few attacks to rebuild it and turn it back on. 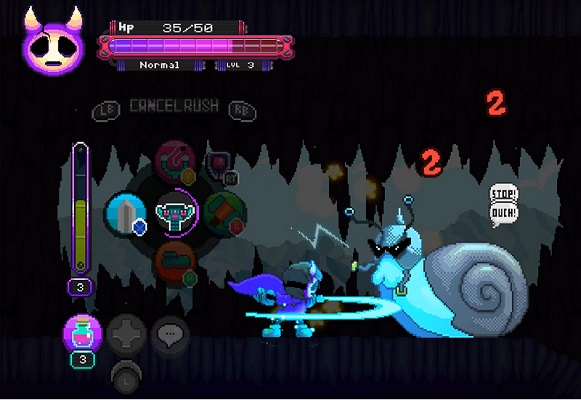 Leveling allows you to choose to increase your stamina, attack strength, or hit points.

Where gameplay fails is that it can lag during battles and seem too easy, as after almost every fight the player’s HP is refilled.

The enemies are where this game falls short. There’s not enough variety. There are snake men, butterflies, bats, snails, mechanized ants, spiders, robots, and two types of ghosts… one of which isn’t an enemy you fight, but more of a disappearing platform than anything else. At the very end of the game, you can choose to challenge your fellow underlings (though you can easily avoid them if you want). The attacks are relatively repetitive, too easy to avoid, and it can feel like a grind at times. If you don’t want to fight the enemies, you have the option to bribe most of them, so they’ll let you pass.

The bosses are (in order) a giant moth, a ghost in a suit of armor, a giant lizard, a shark, and finally “Mr. Stitches” himself. The ultimate chess master behind the scenes is up to you to play or watch the game to find out. The only thing I will say is that the final battle brings things to the third dimension, and its defeat wouldn’t be possible without having spared the enemies previously.

The enemies’ dialogues are witty and full of snark. If you listen to them, you can find out things related to the plot and hints on where to go and what to do next. You’ll even hear them talking about plans of what to do. Most of the dialogue is with the bosses at the end of the battle and with enemies who challenge you to various contests or challenges vs. wanting to fight you. Whereas most RPG games the goal is to kill your enemies (the whole “murder hobos” thing), you spare the boss’ lives, and it’s a significant plot point that you don’t get to do so.

The game’s plot is where this game genuinely shines. I know there’s the concept of the “heel turn” and the “chosen one,” but this game turns those assumptions on their heads. The hero is a clone – one of many. That he broke out of the mold to become a hero is shocking. The BBEG  is a victim, being manipulated by someone else, someone the hero doesn’t have any reason to suspect. 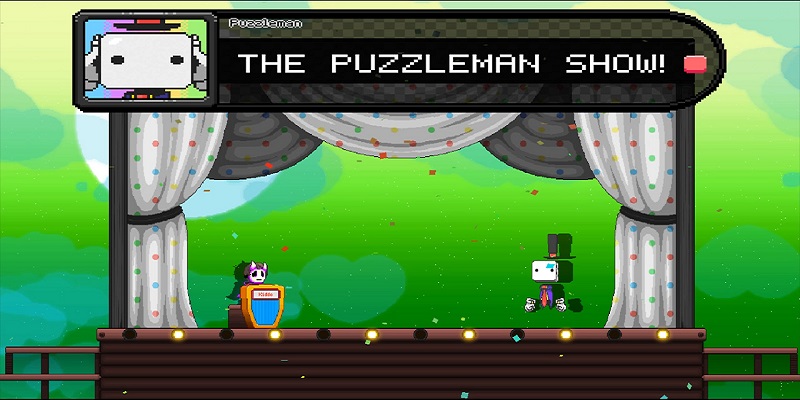 At the end of each level there’s a quiz “game show” hosted by Mr. Puzzleman that lets you earn extra coins if you were paying attention to what the enemies were saying. It’s multiple-choice, so you have a 25% chance of getting it right.

While I won’t spoil the ending, I have to say that it’s bittersweet. Good wins… but at a terrible price. And this point opens the game up for a sequel where what we thought was the BBEG in this game, in reality, turns out to be the hero (or at least one of them) in the next.

The game is relatively solid, but it has enough significant flaws that could be improved upon to make it considerably better. Still, I think it’s worth a watch or playthrough.

What we can learn from Underhero

So… what can we use from this game in your tabletop RPG game? A few things:

Underhero is an interesting story both from a video game aspect and a tabletop RPG aspect. Watch or play it and find out for yourself what inspiration you can derive!