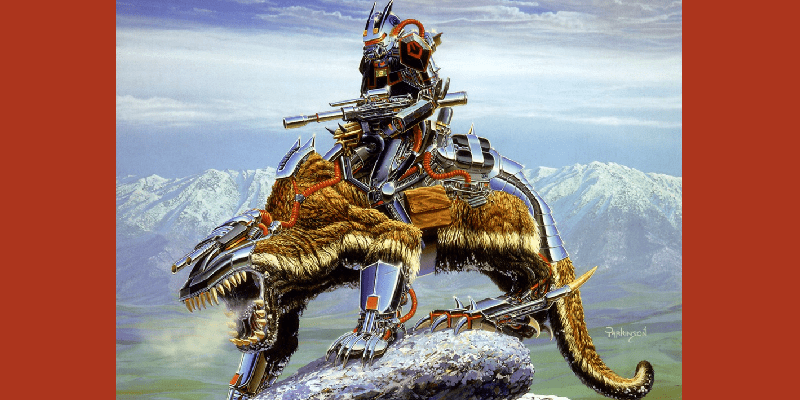 Going through my crazy chaotic thoughts, I remembered I have a home campaign that I should think about.  The players opened up a octagonal portal system to other worlds. So there are 8 worlds available to them, and they’ve only gone through one door. They’re still in a Wuxia Campaign setting right now, so there is no telling when they will leave, if they even want to leave. Ninjas, Samurai and Dragons… Who could ask for anything more?

I thought the next “door” that I should start working on would lead to a Gamma World setting. They may step through, and quickly exit right back after a few minutes. If the door is still open. 🙂

I like Gamma World, but it’s very deadly with invisible radiation, poison and psionic mutated creatures. I also really like 1st Edition Gamma World, and I can pull a lot from the small rulebook.  Gamma World is not that hard to implement, but this isn’t Star Frontiers. It’s a Post Apocalyptic Science Fantasy world set on Earth. The year is 2471, and The Apocalypse has changed the very fabric of life on Earth during the Shadow Years. The pockets of humanity are few and scattered. Men are highly suspicious of strangers, and death comes easy to those that aren’t careful.

So right at the beginning of the Gamma World Rule book, it shows you how to design Gamma World.  The DM uses the large general outline map and then makes more detailed maps of small portions of the large map.  A starting point, like a village, large robot farm, or a territory controlled by a certain tribe or cryptic alliance.  Then it details each one of those for my use. Easy!

The are additional parts to Gamma World that are currently outside of D&D rules; Radiation & Psionics.  I will mostly use the Gamma World rules and homebrew them to fit. The rules for Gamma World Radiation and Psionic combat use matrix tables. So I simplified the method.

A Keeshin (a small white mutated amphibian) wading in a small pond is startled by a group of adventurers.  A Keeshin quickly conducts a mental attack against one of the unsuspecting player characters that has gotten too close to it’s underwater treasure trove.

The Keeshin has a Mental Strength of 16 and attacks the player with a Wisdom Save modifier of 0. The player needs to roll a 16 or greater to save, but the player rolls a 15.  So the mental attack is successful. And the Keeshin does 11 points of psionic damage.

The players are going through a vast radioactive desert that will take weeks to traverse the desert to where they want to be.  They have a 5% chance per day of suffering radiation poisoning of random intensity. Determine radiation intensity level by rolling 3d6 for each instance of exposure.

The DM rolls a 1 on one of the days during travel.

On Day 5 through the desert, the five players happen upon strange metal humanoid buried in the sand (a robot). They pass by it, and and unknowingly suffer a single incident of radiation exposure.

The DM rolls 3d6 to determine the radiation source intensity level of the radiated robot.  The DM Rolls a 13.

Gamma World 1st Edition is full of useful ideas that are easily used for my current game.  The rules are only 50+ pages and full of cool stuff.