Last week, I put together the stats for the demigod Hachiman from the Japanese Mythos found in the 1980 Deities & Demigods. A lot of people asked me to continue, and so I am putting together a trinity of Shinto gods; Amaterasu-ōmikami, Susanowo-no-Mikoto, & Tsukuyomi-no-Mikoto from the Japanese Mythos. These three are all siblings and children of Izanagi-no-Okami. So here is the first of the Trinity, Amaterasu. She happens to be one of the most powerful Gods in the Mythos: 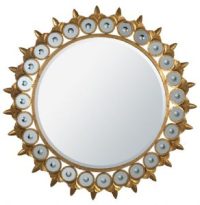 Amaterasu became the ruler of the sun and the heavens along with her brother, Tsukuyomi, the god of the moon and ruler of the night. Originally, Amaterasu shared the sky with Tsukuyomi, her husband and brother until, out of disgust, he killed the goddess of food, Uke Mochi. This killing upset Amaterasu causing her to label Tsukuyomi an evil god and split away from him; separating night from day.

There is a long-standing rivalry between Amaterasu and her other brother, Susanoo. Susanoo is the God of sea and storms. When he was to leave Heaven by orders of Izanagi, he went to bid his sister goodbye. Amaterasu was suspicious, but when Susanoo proposed a challenge to prove his sincerity, she accepted. Each of them took an object of the other’s and from it birthed gods and goddesses. Amaterasu birthed three women from Susano’s sword while he birthed five men from her necklace. Claiming the gods were hers because they were born of her necklace, and the goddesses were his, she decided that she had won the challenge, as his item produced women. 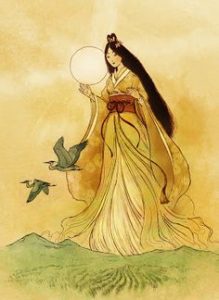 The two were content for a time, but her brother became restless and went on a rampage, destroying Amaterasu’s rice fields, hurling a flayed pony at her loom, and killing one of her attendants in a fit of rage. Amaterasu, who was in fury and grief, hid inside the Ama-no-Iwato (“heavenly rock cave”), thus effectively hiding the sun for a long period of time. Though she was persuaded to leave the cave, Susanoo was punished by being banished from Heaven. Both later amended their conflict when Susanoo gave her the Kusanagi-no-Tsurugi sword as a reconciliation gift.

According to legend, Amaterasu bequeathed to her descendant Ninigi: the mirror, Yata no Kagami; the jewel, Yasakani no Magatama; and the sword, Kusanagi-no-Tsurugi. This sacred mirror, jewel, and sword collectively became the three Imperial Regalia of Japan. The Emperors of Japan are considered to be direct descendants of Amaterasu.

As before, I am using the following ability conversion rules for AD&D to D&D 5e:

I liberally used the Dungeon Master’s Guide monster building and examples of monsters in the Monster Manual.