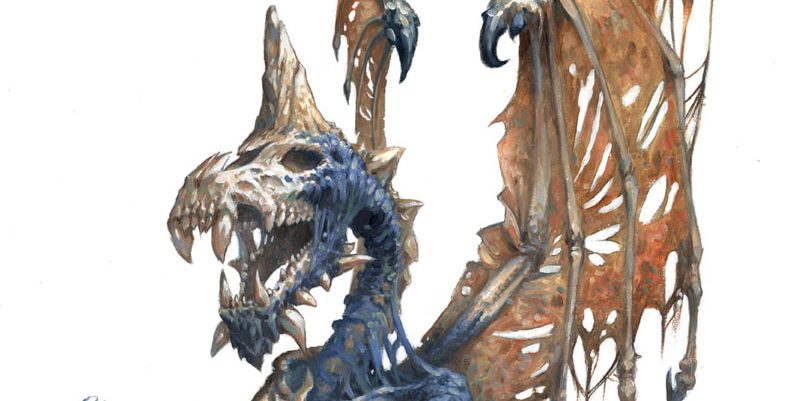 In this series I have been presenting creatures you can use for villains, lieutenants, minions, and wild encounters for 5th edition aquatic games, as well as encounter seeds for these villains at each tier. At these highest tiers, I will be fleshing out these seeds into an outline you can use to develop your own aquatic campaign!

This week I bring you an aquatic campaign outline that culminates in facing one of the high CR foes introduced in the 25 Aquatic Enemies for 11th-15th Level: the hag-raised dracolich.

Undead villains at higher tiers take the form of liches and living necromancers, whether dragons with the dracolich template, or true liches. Though previous tiers focused heavily on green and black dragon enemies, it’s important to note that dracoliches can be of any dragon type. Dracoliches don’t have to breath so the amphibious trait important in earlier draconic encounter seeds is irrelevant.

Dracoliches are cunning and devious, typically working through powerful servants and keeping their machinations, and existence, a secret for as long as possible. Even other evil dragons may decide a dracolich is too powerful to “live”, so secrecy is vitally important.

In this campaign outline, a dracolich, raised with the help of a powerful coven of hag archmages, has set its sights on destroying the draconic ruler of an aquatic dragonborn (or simply dragon-led) city. The hags are powerful necromancers and plan to raise an army of undead to aid the dracolich in its mission. In its living form, the dracolich was the younger sibling of the current ruler. If this involves the benevolent ruler of a good city, the dracolich may have once been gold or bronze, instead of the green or black typically used as villains, adding a bizarre twist to the end-game.

At this tier you can introduce an increase in undead activity in a variety of ways. Place the PCs’ home town or city is within several days travel of the dracolich’s lair. They will run into a number of undead encounters seemingly randomly as the creatures created by the dracolich’s existence wander off into the world, including those listed in the Undead Encounter Seeds article for this tier. You don’t need to overwhelm them with undead encounters, just fold a few into your normal series of adventures.

You can, however, plant clues they may not understand as of yet. The undead may emanate a specific necromantic aura the PCs can uncover with a DC 15 or 20 Arcane or Religion check along with a detect magic spell. This aura may not be understood until they’ve examined several of what appeared to be unrelated undead encounters. Leaders of small groups, such as the ghast(s) from the linked article, may have been specifically created by the hags, while the ghouls they lead were created by the dracolich’s regional effects. These leaders may have a symbol carved on their chest or forehead, or be wearing a filthy but unique ring, necklace, amulet, etc, that hints at a bigger scheme and not simply random attacks.

Non-combat undead encounters could include eerie but otherwise harmless ghosts seen in the distance, the site of an ancient battle reanimating as a spectral haunt at certain times of the night/week/month, or the worrisome rumor over several weeks or months that townsfolk are seeing visions of recently dead loved ones. These may start as rumors spread across months of game time, or may effect a PC directly in a poignant encounter with a formerly dead parent or sibling.

At this tier the dracolich’s plans become more direct and undead “random” encounters more prevalent. The undead archmage from the 6th-10th level Undead Encounter Seed can be modified to be a minion of the hag coven. In fact, the hags may have two or three of these puppets under their control. The minor lich cleric from the Emerald Spire series would also work well for encounters at these lower tiers. The PCs may even be led to believe that the archmage(s) or priest are the cause of the increase in undead activity over the preceding months. Only the presence of the same twisted necromantic aura, or similar enchanted jewelry may lead them to suspect differently.

The infiltration story seed may play out as written, with the addition of several ghosts being used to possess key members of the city’s ruling council, or the dragon’s royal advisors, during the distraction. The artifact could be an item of terrible necromantic power, leading the PCs on a series of adventures to recover the item and face the archmage. A ghostly possession should go uncovered in at least one of the advisors/council members, perhaps by having the ghost hide out in a servant until the ghost-hunt is over, then taking possession of a key member, ideally someone the PCs already dislike. That way, when they hit the following tier, the NPC’s actions will be seen as political and not necessarily arcane in origin.

If you have clerics or paladins  in the group that are able to detect and dispel undead easily, feel free to provide the ghost with a powerful item to both hide its presence, and grant it advantage on saves against features like turning.

At this tier the dracolich’s machinations begin to escalate. The possessed council members/advisors begin talk of rebellion against their ruler, sowing the seeds of war with a neighboring country, meeting underworld contacts in the seedier parts of the city, and arranging for the delivery of weapons and magic items to gangs, rebel groups, etc. Adventures at this level can take on a more political and intrigue-based theme, with undead encounters decreasing as the coven and dracolich draw the randomly created undead into an army. The PCs may see this as a side effect of destroying the archmage at the previous level, instead of a terrible sign of things to come.

If the PCs have been getting missions from the council, they may be sent on any number of seemingly important adventures to take the away from the city proper, allowing the possessed politicians to strengthen their hold on the rebellion. These missions might include recovering magical objects or artifacts that at first seem helpful to the cause, but in actuality play into the dracolich’s hands.

Adventures may include the recovery of lost magic items from a previous age for the church the archmage raided, destroying the necromantic artifact the archmage stole in a rare and powerful manor (a la: trip to the aquatic hydrothermal “Mount Doom”), or completing personal quests directly related to the party members. At this level, the hags likely want to keep a close eye on the party so may send a ghost to possess an NPC important to the party, or even introduce one of their living minions as an “ally” to the party. This false ally’s trail may lead back to the possessed advisor, or may include yet another twisted piece of jewelry, hinting that the true villains have yet to be uncovered. If it is a trusted NPC that is possessed by a ghost, the PCs may uncover the ruse along with the item that prevented the ghost’s detection. Knowing such an item exists may make them question who to trust in the council and gives them something physical to search for as evidence.

The final confrontation may be as subtle as tracking down the coven in their lair, only to realize they are backed by a dracolich, or as campaign-shattering as a war between the draconic ruler and a neighboring country, only to have the dracolich’s undead horde attempt to devastate its hated brother in a surprise, two-front war that the party must stop. If the PCs manage to uncover the possessions and help to unravel the “rebellion” or the manufactured war, then the dracolich is forced to take direct action against the city while the PCs work to defend it.

The classic 3.5 module, Red Hand of Doom, is an excellent source for creating a campaign or series of adventures based on an attacking horde, as well as running adventures during one or more sieges. You will also find inspiration in the Incursion campaign framework presented in Dragon Magazine #309, and Dungeon Magazine #100.

If the climactic battle is brought to the hags, it can take place within the labyrinthine mazes of deep sea trenches long used to dispose of the local dead. The hags have been using the centuries-long piles of sentient bodies as fuel for horrific skeletal constructs, animating packs of ghouls and ghasts, and angry ghosts and specters. They’ve even recruited battalions of living warriors, zealot cultists devoted to the dracolich’s vision.

If you prefer an “urban” combat within the aquatic capital city, look to Red Hand of Doom and my own posts about our RHoD campaign for inspiration on ways to make large-scale combats feel more personal, and to help the PCs feel like their actions in the campaign (such as making new allies and uncovering threats) made a significant difference in the final battle.

Hopefully this article helps you envision how a fully aquatic campaign can be organized, or give you story ideas for your standard surface game. Stay tuned next week for more aquatic villains from 16th-20th level, and the week after for a campaign outline focusing on the horrors of the aboleth!