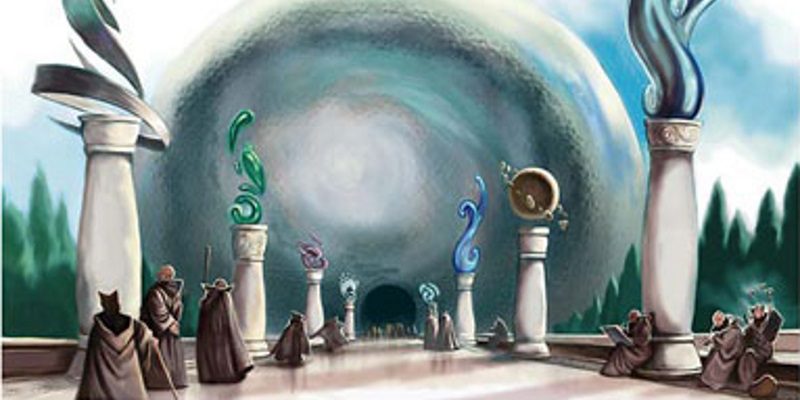 In last week’s History of the Classes, I looked at the Psionics Handbook and the Expanded Psionics Handbook, the core psionics rules for 3.0 and 3.5, respectively. This week I’m moving on to later developments within 3.x: one official WotC expansion, Complete Psionic; and one third-party alternate vision, The Psychic’s Handbook. (Yes, there’s a lot more psionic content for 3.x than that in circulation. I have to draw the line somewhere, and this arbitrary line is as good as any.)

This book, from April of 2006, adds three new psionic classes into the mix, bringing the total (from official WotC releases, anyway) up to seven. These classes address the major party-role gaps of the four classes seen in the EPH. Specifically, support for a psionic healer is sorely lacking – you can transfer damage from your ally to yourself, and then heal yourself, but that’s too expensive and slow to really work for the party’s main healer. Also, such a character is so vulnerable in the round between the empathic transfer and the body adjustment (having absorbed a pile of damage) that it’s only too likely the party’s healer will keel over right when they need him most. Secondly, there’s no power-using rogue or skirmisher – a conceptual midpoint between the psychic warrior and the soulknife.

Complete Psionic fills those gaps… oddly. The Lurk is a pretty sane vision of a psi-rogue.

Lurks are skirmishers with a complicated approach to building a pool of damage dice. They partially work around the Rogue’s major weaknesses (things that are immune to sneak attacks), and have some rude things they can do even to things they can’t sneak attack, but they’re rogues that can run out of rogue juice, because just about everything operates on one of their two per-day currency limits. That’s a tough row to hoe, in terms of figuring out good tactical gameplay. On the other hand, a psionic assassin that flits from shadow to shadow and leaves creatively finalized bodies in his wake is a concept that I get behind in a big way.

The “healer” role shows up in the Ardent class, and to a much lesser degree the Divine Mind. The Ardent isn’t as capable of a healer as a cleric, as touch of health is very poor emergency healing, from the brink is even worse, and only their top-end mend wounds power gets into large amounts of healing output.

The Mantle format means that two ardents might be quite a lot different, though there’s a good chance that they trend closer together as they advance, because their choice of mantles may have to overlap.

Thematically, ardents are pretty odd – the mantles represent philosophical engagement, a sort of structuring of thought that opens the way to psionic powers. Psions with a crutch of formalized thinking, maybe, that opens up powers you can’t get any other way.

Finally, there’s the divine mind, and if you care about general psionic themes, this class is not for you – it radically violates the essential nature of what psionic power does by equating it with the ability to channel divine energy. If the Ardent is psionics + philosophy, the Divine Mind is (philosophy + entity = worship) + psionics. Which, maybe appropriately, makes them good at other things, but pretty crummy at psionics.

Taken together, Divine Minds are psionic warlords (or marshals, as 3.x calls them). They don’t have a supply of feats to make them great melee brutes, but they can do pretty well for themselves. The divine/psionic blend doesn’t really gel in my imagination, and a brief survey of fan responses on the internet suggests that I am not alone here. It’s not hard to imagine some rework of this class concept showing up as a Mystic subclass in 5e at some point, but I hope they’ll hone the archetype’s thematic point.

The new feats and prestige classes also do weird things with psionic theme. It’s not surprising to see mind flayer references all over the place – but feats that make you part mind flayer, that’s just frickin’ weird. They don’t reproduce like mammals in D&D canon… so even a hint of how this came to be would be nice. (I love the idea that I saw in the Giant in the Playground forum – since mind flayers are actually from the distant future, they should really be called Illithid Progenitor feats.) I like that there are Host Feats to support kalashtar from Eberron, and other psychically-possessed characters, but their effects are markedly underwhelming, and don’t do much to develop a character’s story.

The core theme of psionic characters is that they’re drawing on their own developed power – it’s what sets them apart from other spellcasting types. They don’t rely on any external power or entity to function. Until we get to Complete Psionic, with the Divine Mind and several of the prestige classes. I can turn a blind eye to power creep in a book released just a few years before the official sunset of WotC’s support for 3.5, but I can’t let inconsistency in theme go. I’m fine with everything about the Storm Disciple, for example, except for making it psionic. Illumine Souls are the serious offenders, though – a connection to the Positive Energy Plane is a really weird decision, even for something intended for soulknives. On the other hand, the point of 3.5’s Complete series is character concept blends. Psionics for non-majors, one might say.

Far a completely different vision of an approach to psionic power, we have the Psychic, created by Steve Kenson and published by Green Ronin under the OGL. It nominally shares thematic space with the psion from the EPH, but has next to nothing in common mechanically, and doesn’t have any legacy elements from a previous edition to bring forward (as compared to, say, attack and defense modes that have persisted since the first article in my series). The Psychic seems a lot less like a master of psychic powers than the psion, as the class follows a skill-based structure, and almost everything has another die roll to pass in order to take effect.

As you see, the class itself has no “features” other than providing more picks from the rest of the book. There’s nothing wrong with a stripped-down chassis approach, but it does put more emphasis on system mastery. It contrasts notably with the prestige classes, which are all features and no new choice points. (It’s fair to say that all fire-starter psychics have more in common than all psychics.)

The throughput available from psychic skills and psychic feats is pretty cool, though it’s hard to compare any of this to the performance of any other D&D classes. (The mechanical similarity to the Fighter notwithstanding.) Don’t play a psychic for raw damage; it’s possible to get your every-round damage output up to 6d6 or so at high levels, but that is not an efficient lifestyle choice. Even fire-starters – their damage output is okay, but their other abilities are why you’re here.

The skills cover the minimum acceptance criteria of parapsychology-style psychics really well. There aren’t a ton of new ideas rolling around there, but that’s another way to say that this text has a death-grip on its supporting fiction, and I can respect that. The book’s guidance for running storylines about psychics, building psychic stuff into your setting, and paranormal phenomena tosses out some nice spins on traditional horror and paranormal-thriller tropes.

The comparative unreliability and lesser output of psychic powers – and the adaptability of psychic powers to basically all caster-like tasks – suggests that the best place for this class is a campaign where it’s not in competition with clerics, wizards, and so on. It belongs instead in a campaign where it is the only class with paranormal powers – there might be fighters, rogues, and barbarians, but the psychic covers for everyone else, including the monk. In that campaign model, I’d add in skill points, additional class skills, and bonus feats as occasional rewards for adventures, because they’re such a useful currency to all of those classes.

Well… these two works have nothing in common. One is a development on the foundation of an earlier book, and the other is intended as a total replacement of said foundation. Complete Psionic is a colorful mess: evocative words, but more flash than substance, and burdened with the 3.x rules-crunch model. To me, it represents everything I hope the 5e Mystic won’t be, and the best thing it achieves is introducing the Ardent and Lurk archetypes – the Ardent makes another appearance as the 4e psionic leader, and the Lurk is the ideal class for brooding in the shadows… psionically, and murdering people while you’re there.

There’s nothing wrong with the Psychic that being a little more generous on overall power wouldn’t fix. Its core approach of treating everything as a freestanding skill doesn’t play nice with a stingy skill point limit, but it’s the closest known descendant of the 2e Psionicist. It feels more like Weird Stuff chapter of a ground-up hack of 3.x than a book with a class in it.

Almost literally true: the book also contains rules for a d20 Modern Psychic. So run d20 Modern rules, using the Past supplement. Congratulations, you just went around your elbow to get to your nose… except that that’s a valid low-powered 3.x retroclone.