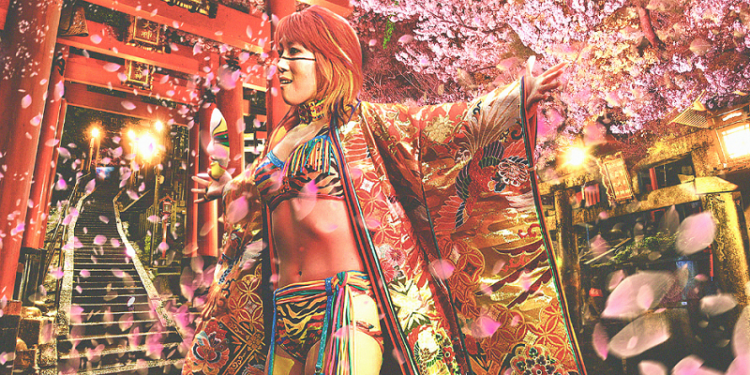 Like a lot of people, I loved professional wrestling when I was a kid. Back then, the WCW was still around, and owned by Turner. This meant that growing up in Atlanta led to running into professional wrestlers all over the place. Some went to friends’ churches, others lived in neighborhoods close by, and my next door neighbor was a long-time CPA for the WCW, meaning I saw scads of wrestlers every tax season. As a kid, it was totally awesome. It wasn’t something I realized just how cool it was until I was older.  Again, every kid around me knew some professional wrestler or other, so it wasn’t unique to us.

Also like a lot of people, I stopped watching as I got older, save for a time in high school when Comedy Central was showing ECW before episodes of “Whose Line Is It Anyway.” The 90’s were a lawless time. For years after this, I was vaguely aware of wrestling, but mostly I didn’t have anyone to watch it with, so I stopped watching. I would read the articles about big events when they appeared on SI or ESPN, but that’s where it stopped. Until the last few months, at any rate.

I have been lucky to have a long-time friend move back in town, and said friend possesses the WWE network. My friend got me to watch the Cruiserweight Classic, and after a few matches I knew I was back in. The athleticism is just incredible. From that point, it was an easy sell to NXT, which is probably my favorite of the WWE shows. It’s just good wrestling, basic story development, and reacting to the crowd at the drop of a hat. (Never let it be said that the marketing/social media department of the WWE isn’t top notch. Holy shit, it’s amazing.) Since it’s been so long since I had watched wrestling, I had forgotten just how much of my appreciation for the action genre comes from it. Now that I am older and wise, I can not only fully appreciate the physicality, but recognize how wrestling uses action to tell their story, and how all the best matches really put the lessons of action storytelling to work. Gamers can learn a lot selling action sequences from watching quality matches.

Yes, I know about World Wide Wrestling (and it’s awesome!), but this is strictly about the action.

Dance has long been telling stories through movement. The best action movies do the same thing, but the action carries through to the movement, which then tells the story. It’s an added layer that can easily get lost as being the set piece itself. Action is cool, and people might love a scene, but if it doesn’t DO something, it doesn’t tend to stick around. The action needs to propel the story, but the action itself depends on movement, particularly in framing and use of space. Simply put, all of the best action scenes layout the space in which the action will be occurring, and then frames things in such a way that the action naturally flows and transitions.

For an easy modern example, look at Kylo Ren and Rey’s lightsaber fight in Star Wars: The Force Awakens. The fight beautifully transitions, showing the battlefield in ways that are natural and obvious, but also provide a way for the viewer to easily track the fight. When the action shifts, it is shown from multiple perspectives to allow the fight to continue movement, and make use of what is already established. When the characters approach a narrow turn, there is built-in tension because the audience is already aware of the terrain, and knows the predicament that is about to occur. The surprise is not from a sudden turn in action, but from how the action takes place in the environment, and how the motion then carries through to the next beat and location. The action itself then conveys the emotion and story, while the motion lends it narrative weight. It’s simple to understand, but incredibly hard to get perfect. For more examples, watch Gareth Evans and George Miller movies.

Wrestling works from a more difficult position, as the story and character elements are more sparse than your average film. Feuds and stories are developed rapidly to meet bookings, and often only have 5-10 minutes of screen time during a given show. While die-hard fans might discuss the story lines at length, the truth is they are a small part of the overall event itself. The real narrative relies on the action in the ring.

The most important thing to realize about wrestling action is that it takes place in a fixed location. You have the ring, ringside, the walkway, sometimes backstage, and rarely the parking lot. For the majority, you have the first three options. The action must then take place solely in this predefined environment. Any set feature must be able to fit within the confines of this area, which puts interesting restrictions on the action. What emerges are key features that make regular appearances: chairs, announcer tables, the staircases into the ring, other wrestlers hiding beneath the ring, and a variety of foreign objects such as pipes and brass knuckles. On top of this, there are special feature matches that showcase ladders, steel cages enclosing the entire ring, suspended cages, coffins, snakes, and numerous other items.

Even though the area is the same, the terrain of a given match might be drastically different. Even if you watch two matches with ladders right in a row, the story they tell through action is very different. For example, if a ladder is in the center of the ring, and setup, you can guarantee that there will be a fight ON the ladder at some point. The ladder is the focal point, so you know the action will move there, and it is likely to be a climbing feature of some sort. Otherwise, why have the ladder setup? The next match might have the ladder alongside the ring, so you know there will be a moment where one wrestler brings it into the ring, and the act of carrying will be set piece itself, more often than not. If the ladder is not immediately setup, you can also bet the ladder will feature in at least one more set revolving around its use in the current location or the setup of the ladder. If you see a pile of chairs get setup outside the ring, you can guarantee that it will play some part in the match. In each case, you probably think “well duh, of course,” and that is a good thing. It means the action is doing what you think it would naturally do in that situation. The movement not only make sense of the action, but it IS the action. Moving the ladder, climbing the ladder, jumping from the ladder, etc. I could go on, but you get what I am saying here.

Likewise, if a wrestler is tossed out of the ring, you can almost guarantee the wrestler still in the ring is going to follow. If the outside wrestler is in a position that is safe, or at least mostly safe, the inside wrestler will perform a risky move, if they are capable of doing it. If they are not, they will certainly move the outside wrestler from this safe position to one of relatively threat in short order, or will use the safe area as a place for grandstanding and showboating. Before getting back in the ring, the area outside the ring is utilized in some fashion, throwing someone into the stairs, slamming them into the barricades, pushing them on the apron, or any number of possibilities.

In all cases, the same small, constrained area has to be used to tell any number of stories. It doesn’t need a new location to keep it interesting. The movement and the action do all of the work.

Ok, so we have talked about the constraints facing professional wrestling from an action and story perspective, and discussed some ways in which they use those constraints to their advantage. Those are all ancillary to the main point, which is the majority of the story is told through the action. A wrestler has to convey they are a hero or villain in a brief period of time. Sure, they have the skits and the mic, but the majority of their time is spent in the ring. The wrestlers have to carry their gimmicks, and convey the story taking place with their opponent.

Think about it. A wrestler has to convey is their chosen stance on the strength of their in-ring performance. This is entirely down to the way the person acts in the ring. A villain can get this across through things like faking injuries to prey upon an honorable foe, using items like hidden chair or brass knuckles, having third parties run into the ring, or through more subtle, but no less effective means. That is, of course, through the moves they use.

A good villain does everything possible to get the upper hand. When going for a pin, the bad guy might put a foot, or both, on the ropes to get some leverage. In a clench, the villain might be rake the eyes, or bite the opponent. A villain might pummel the good guy in a corner, ignoring the referee’s count. Not only does the villain do these things, but the type of moves they use tend to be more raw and visceral. DDTs, lots of kicks, big suplexes, and even moves like the backstabber (a modified backbreaker done with the person in control on the ground) are all part of the villain’s repertoire. It’s not necessarily a guarantee, but the move sets tend to vary when wrestlers swap between good and bad. Someone might have a moonsault as a finisher when they are good, but a submission hold or a flying knee when they are bad. The change in physicality and in how the action is sold alters the story. It’s as easy as that.

In D&D, it’s fair to say that fight and action scenes play an important role. However, it’s very, very easy to have your fight scenes turn into slogs as the players square off against beefy things, or the person with Sentinel is locking down movement, keeping everything in one place. While it’s certainly fine to just have a brawl every now and then, if you aren’t doing something more with the action, you are wasting opportunities. Any action scene can, and should, be used to tell a story.

Take the lessons of professional wrestling to heart:

There are many more lessons here, but this is long already. Anyway, it’s been awhile since I have done any cross-genre analysis like this, so I hope you all enjoyed it. If not, let me know that too and tell me what I should spend my time doing, instead!

Return to Neverwinter in the Cloaked Ascendancy