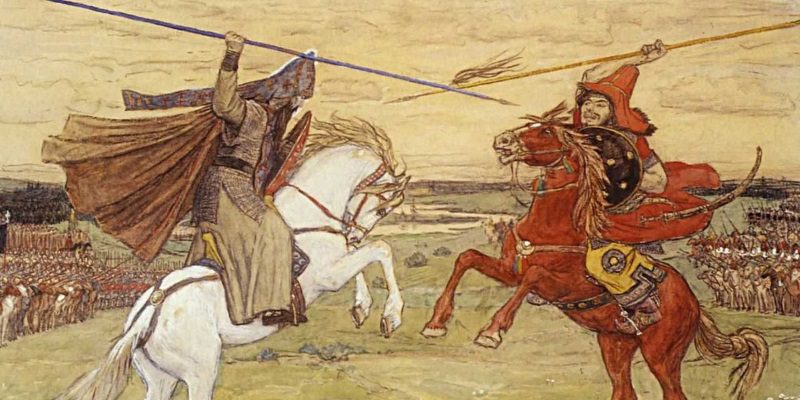 I’m taking a week off from the history of the Ranger class to talk about encounter design, an under-appreciated art within the broader work of game-running. Tabletop games, like video games, have long had a concept of a “boss fight,” a climactic end to an adventure or series of adventures. Starting from that similar position, though, video games have done far more creative things with the concept, while tabletop games have scarcely advanced beyond what MMO players would call “tank & spank.” There are exceptions, and I’ll be noting the ones I can think of, but in general I’m interested in expanding the range of options people consider when they design climactic encounters.

The simplest phrasing of this that I have heard is “The point of a challenge is to make you uncomfortable.” Breaking that down a little more, the goal of climactic combat design might be, “Disrupt the PCs’ optimal combat tactics in at least one significant way.” This highlights two things: what makes a challenging, exciting encounter for one party may be impossible for another group of the same level, and trivial for a third. (Correspondingly, take my ideas below with a grain of salt.) Secondly, it helps us brainstorm by breaking down the PCs’ approach.

As a basis for discussion, let’s assume you have a classic D&D four-man band, or close enough as makes no difference: a fighter, a rogue, a cleric, and a wizard. Actually, using 4e’s combat role titles will make this more generally applicable; whatever you may think of 4e, the most iconic party composition in every edition of D&D does include a defender, a striker, a leader, and a controller. (5e definitely doesn’t break if you’re missing one or more of those roles.)

In general, the players want the defender to close with as many of the bad guys as possible, as quickly as possible, and stop them from getting to the less-armored party members. If the striker is melee-based, they want the striker to flank the enemies and deal damage, disengaging when it looks like someone is going to go house on them. If the striker is ranged, you want her to make sure she’s getting clear shots. In either case, everyone who is doing damage at all wants to focus fire on one target at a time, though if the controller and others splash damage on secondary targets, it’s all good (just watch out for excessively close air support). Most leaders are melee types, but with some number of good options for ranged attacks; I think 4e and 5e are the only editions with substantial ranged healing (other than really-expensive-for-what-you-get area healing effects in 3.x), so most healing output requires getting perilously close whatever the melee types are fighting, and possibly casting spells while threatened. The leader may do some off-tanking, keeping opponents tied up while everyone else chews up and spits out other enemies. Usually the leader has sufficient armor, if not quite sufficient hit points, to do this for a good while. There may be debuffs or other conditions that party members, and especially controllers, can throw out to make things easier on everyone; slowing down the bad guys trying to mulch the defender is a good idea. Keep enemies off of the controller at all costs, and things should turn out okay in the end.

By itself, there’s nothing wrong with this structure. It has a job for everyone in the party, and it feels pretty good when it works right, because it’s designed to dismantle the opposition’s plan and put them in the ground with a minimum of fuss. What happens when you’re forced to ditch this plan and come up with something new on the fly, though?

Defender Closes with the Bad Guys

The fighter-types probably can use a bow or other ranged weapon, but if they’re the party’s meat shields, it’s melee all the way*. If you’re going to mess with this part of the plan, make sure the defender still has a good way to contribute and have fun, because an enemy that just makes the defender useless is not a good time. If you’re playing the defender, put some tricks up your sleeve so that you can contribute even against teleporting or phasing bad guys.

*: This is not the time to mention your Warlock 2/Sorcerer 2/Paladin X that is a better defender than any fighter could ever be.

The Striker Moves to Flank

The directive to outflank an enemy whenever you can applies to everyone in the melee, of course – even if the system doesn’t grant a bonus to attack rolls, you’re in better position to cut off escapes. This is also about focusing fire on opponents, because most editions of D&D, and indeed most tabletop games, avoid death-spiral mechanics; thus an opponent fights at full strength until the moment he keels over. (Mechanics like “bloodied” in 4e could have worked around this one way or another, but that was relatively rare.)

In fact, 3.x and later editions of D&D go much further in encouraging PCs to focus fire, such as regeneration, Sneak Attack, and any marking mechanic (common in 4e, optional in 5e). 5e’s Concentration rules and 4e’s non-stacking damage-over-time rules are notable countervailing elements.

Clear Shots for the Ranged PCs

Ranged strikers and controllers mostly want to pick one spot where they can see the whole fight, but they are completely insulated from it aside from an arrow slit. A really small one. From this position they rain death and mayhem upon the DM’s glorious armies, et cetera. The DM’s goal, then, is to force them to move, because moving (especially moving away from cover) exposes them to risk. Something to think about with their shots other than murdering the boss is good too.

Look, everyone here has played at least one video game shooter, right? I don’t need to explain about the shooting gallery of balloons or whatever that drop cool power-ups or weaken the boss for whatever reason? Okay, good.

Editions of D&D that are not 4th don’t share its clear delineation about what is a controller and what is a spellcasting ranged striker. That’s fine. For the sake of argument, understand that this section and the one preceding it might apply to all spellcasters, but this section applies much less to archers, slingers, and gunslingers.

In combination with focused fire, there’s a substantial incentive for both sides of every fight to use their biggest attacks first (“go nova”) – especially the NPCs, who probably do not have long to live, so if they want to be memorable or impressive, they had better get it out of their systems in the first two or three rounds. PCs at least have the possibility of more encounters later in the day… but this is a post about boss fights. The ones at the end of an adventure.

I’m intrigued to see a few mechanics in 5e discouraging PCs from going nova as soon as they see the boss: legendary resistance. A certain number of times per day, some top-end probably-a-boss monsters can turn a failed save into a successful one instead. While seemingly heavy-handed in execution, this is a pretty clear reaction against the degree of saving throw penalty that could be levied against solos in 4e, trivializing even climactic encounters. To a much lesser extent, counterspell also discourages going nova, though that’s costly enough to be closer to a wash.

The Leader Heals or Buffs Someone

Oddly, this is one of the hardest ones for me to do anything interesting with, but that’s okay, because leaders already have to worry about moving with the melee combatants and/or hanging back with the spellcasters. I’m not seeing that many interesting ways for the boss or the terrain to influence one PC casting a spell on another, other than the chill touch thing I mentioned earlier. Frankly, that was my experience of playing a priest in WoW too – a lot of times I didn’t really watch the fight except to avoid standing in fire (unsuccessfully, let’s be honest), and just try to keep those health bars topped up. D&D is substantially different, in that you won’t cast a healing spell in every round of combat until high-level play, if even then.

Increasing the healing demand on the leader classes is not a great direction to take things – they’re casting out of spell slots they could be using to feel directly effective in the battle.

The most important thing I can say to conclude this: don’t negate someone’s gameplay and stop there. If you close one door, you are obligated to open another. Players also shouldn’t make their characters one-trick ponies – if your class makes both ranged and melee attacks an option, be prepared to use both. Let your character be practical about it.

Okay, that’s what I’ve got. See that Comments field below? It would be totally cool if you added something to it that constituted an awesome boss fight structure, adapted to D&D. People are going to have all kinds of different tastes as regards mechanics becoming intrusive on the epic showdown with the boss, and if all of this sounds terrible and game-y to you when what you want is a pure narrative experience, that’s cool too: but talk about how you set climactic encounters apart. If not mechanically, then what narrative tricks do you use to engage all of the players in the intensity of facing their nemesis? (Nemeses. Nemesises. Whatever.)