ColumnsD&D 5eHistory of the Classes 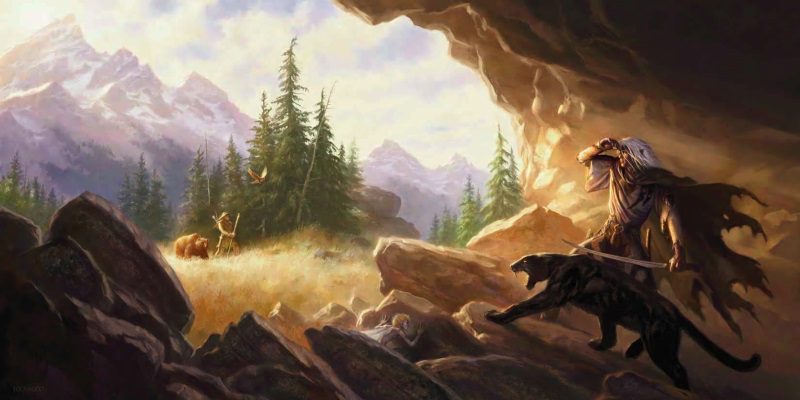 After a week off, I’m back to finish off the ranger, like a horror-movie sequel. Throughout the series to date, we’ve seen the ranger transition from a super-fighter with a smattering of mystical abilities and an obligation to travel light and fend for herself, to a lightly-armored skirmishing warrior (with or without spellcasting, depending on edition). As in most things, 5e returns the ranger to an earlier thematic and mechanical place, while preserving as many of the well-learned lessons of 4e as possible. We also have a playtest alternate ranger to explore.

Let’s take it as read that Mearls & co. discovered the historical problem with other classes looting the ranger’s Unique Stuff before or during the playtest, and the 5e ranger is trying to fix that. Based on broad fan reaction (and the fact that WotC is working on alternative class designs), something doesn’t click. In fact, I think it’s more than one thing.

Without the support of its subclasses, the ranger doesn’t carry all that much reliable combat punch, compared to its closest relative, the paladin. There’s no parallel of Improved Divine Smite’s passive damage bonus or the many and varied defensive boosts offered by Divine Health, Aura of Protection, and Aura of Courage. Not that I want to see more immunities floating around, believe me! It’s just that the game does present a nature-focused warrior type with shockingly good attacks and defenses, and it’s the Oath of the Ancients paladin.

What do the ranger subclasses bring to the table, though?

At each of four levels, the Hunter gets to choose one ability from a list of two or three. 3rd and 11th level increase offensive ability, while 7th and 15th level grant defenses.

The Hunter subclass, then, is all about changing how you fight. It doesn’t refer to hunting beasts with stealth at all – instead, it’s about whether you hunt single behemoths (dragons, giants) or creatures that appear in vast numbers (humanoids). Both of these situations come up often enough that you’ll get to use your subclass features regularly. I wish there were a little more theme to go with these mechanics – the subclass doesn’t have a narrative throughline. (I like having a lot of fairly meaningful choice-points, though.) On the other hand, if you’re looking for Skirmisher and Guardian elements, they’re loud and proud in the Hunter.

The Beast Master does what it says on the tin, sort of, by mastering the hell out of one beast. They preserved the action economy of 4e Beast Masters, but without encounter or daily powers to let both ranger and beast act in concert more often.

The Beast Master is also about changing how you fight, by making you do less of it. They don’t especially Skirmish or Guard in a direct way, but the companion is pretty good at both. Your job is to send your pet into danger and jump in when it’s convenient. I’d like to see an expanded companion list, scaling creatures like drakes (dragonkind, not waterfowl), lions, and other things down to CR ¼. I’m great with not having 3.x’s number-crunching system for unlocking greater companions as the ranger levels – I’ve never been sold on “trading up” when the narrative really wants the player and character to care strongly about the companion. Even so, I think the mechanical solution here is treasure rarity ratings on higher-CR creatures that you can bond with as companions. There won’t be too many magic items to improve the ranger’s companion, so upgrades as part of a quest reward would be cool. The whole class has plenty of space to get buffed up before it’s overpowered.

The ranger spell list involves one spell for melee weapon attacks, four for ranged weapon attacks, one to grant more ranged attacks, one to boost damage on a single target (hunter’s mark, the standard by which all other ranger spells are judged), three for healing, and so on through other defensive and utility effects. The short version is that you can’t cover all or even most of the bases with just eleven spells known. As an alert reader pointed out to me, several of these spells are lifted not from previous rangers, but from 4e’s Seeker class.

The core problems of the Player’s Handbook ranger include its poorer damage output – without spells, their damage pretty nearly flatlines at 5th level, because Volley and Multiattack depend so heavily on positioning. Bestial Fury is solid, but you’ve got to really know what you’re doing to get acceptable results from the Beast Master in the first place. (I never recommend cruising the class guides for best builds and tactics, but I’ll make an exception for the Beast Master.) Damage output issues are fairly easy to fix, in the ways I’ve described above.

Another problem is that the mechanics of Favored Enemy and Favored Terrain don’t connect with the fiction well at all. Favored Enemy has lost the last of its teeth, which is fine because 1989 (ahem, 1e) was the last time it was a good fit with theme. With Favored Terrain, I don’t recall a time when any ranger-like character in fiction said, “Sorry, guys, I’m totally out of my depth now that we’ve changed terrain types.”

Let’s move on. We have a whole alternate ranger class to cover, as well as a playtest ranger archetype, the Deep Stalker.

This is a very different ranger, and in fact is pretty unlike every other class currently in the game; its closest relative is the 4e shaman, but with a rogue’s stealth-and-ambush tactics.

There’s one piece of… “why is this here, please?” in the flavor text. “Rangers are champions of the natural world. They are typically good aligned, and their link to nature gives them supernatural abilities. They are the paladins of the forest.” This is a throwback to 2e-and-prior, when rangers had to be Good-aligned. It seems like a really strange thing to dredge up, since their hit-and-run tactics are just as useful to the bad guys. This doesn’t matter to the mechanics, so it’s easy to ignore.

There’s a lot going on here, and the themes are kind of interesting, but I think those first two levels need another look. The Spirit Paths are cool, though it’s got nothing to do with the ranger of D&D’s traditions. Like I said, that isn’t a problem to me, though it drew substantial flak from the broader community upon release. It definitely positions the ranger further from “civilized” traditions and closer to the Totem Warrior barbarian path.

It’s also an unusually narrow conception of distinguishing factors between subclasses. What we see here adds two action options, but doesn’t change the ranger’s combat role or tactics much at all. Since each option is a different animal, it doesn’t seem like additional Spirit Path options would expand the class’s themes all that much. Maybe this is different at higher levels? I’ll hope so. (To be fair, I would be disappointed in judging many of the game’s subclasses by their initial ability.)

(Keep in mind that this is for the Player’s Handbook ranger, not the Revised Ranger. There’s a lot of ranger playtesting going on.)

This archetype is nominally about superior play in the Underdark, but the Underdark is more of a unifying theme than a requirement for function – very good move there.

I don’t want to suggest that this Deep Stalker is meant for any particular ranger. Certainly not their #1 headlining Forgotten Realms character. The Skirmisher, Wanderer, and Guardian are all present here, though Guardian maybe least of the three. It’s not a bad effort within the context of the Player’s Handbook ranger to address the class’s issues.

The 5e ranger misses the mark both mechanically and thematically. WotC has met that fan response vigorously, but with care and deliberation that they’ve shown throughout 5e’s playtest and since release. No few fans have made good efforts to address the class’s issues as well. The class does have an identity again, though it’s still an uneasy balance between function and theme, more so than in most of 5e.