Fey Enchanters and Their Lairs 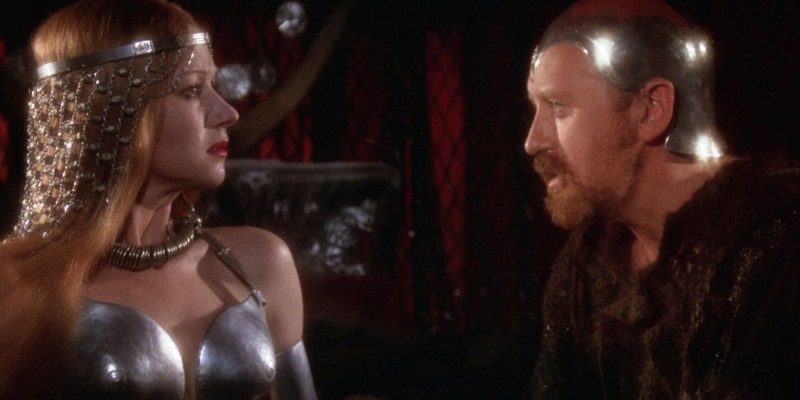 Two weeks ago in this series on the fey, I shot the moon for the Challenge Rating with the Eldest. This time I’m dialing it back a bit, and looking at the velvet glove of the Feywild: fey enchanters. They are courtiers, spies, diplomats, and weavers of magic – in short, they are the balance to the fey knights. The fey have a reputation for deceptive dealing without outright lying, and for their gifts of misdirection, and fey enchanters are one of the main sources of that ill repute. From another perspective, I hadn’t built any primary spellcasters or anything with lair effects, so I wanted to try it out.

Fey Chivalry | Fey Huntsmen and Leashed Terrors | Faerie Tales: Naiads, Pixies, and Sprites for 5e | A Visit to the Shadowfell – Shadar-Kai & More | In a Goblin Market | Fey of the Elder Starlight | Fey Enchanters and Their Lairs

Fine, beautiful features and long, pointed ears give this creature an elvish appearance, but the faint gleam of his skin and the palpable aura of power suggest that he is something more.

Fey enchanters are the courtiers and chief diplomats of the fey. More than any other fey, they are the root of the reputation for scheming and backstabbing. Other fey enchanters live alone in the wilds, almost indistinguishable from hags or mortal wizards, pulling the strings of inscrutable plots.

Masters of Intrigue. Few indeed can best a fey enchanter in the social graces. Their lies are beautiful and persuasive. To be in their presence is to crave their approval, or to be surrounded by others seeking it, making it all the harder to challenge their deceptions. They pursue the higher and more inscrutable goals of the Archfey.

War Through Other Means. A fey enchanter would always rather talk than fight. If a fight does break it, the fey enchanter continues trying to get foes to lower their weapons and settle the matter peaceably. Fey enchanters often show mercy to defeated foes, but bind those foes in powerful enchantments to prevent further unpleasantness.

Fey enchanters spend time and energy shrouding their lairs in magic of misdirection – whether that lair is a lone tower in the wilds or the halls of an Archfey’s court. Enticing sights, sounds, and smells are found throughout the lair. If possible, the fey enchanter suits those things to the preferences of guests – including intruding enemies. As they are all fey glamour anyway, it takes but a moment’s thought for the fey enchanter to change one kind of feast to another.

If a fey enchanter is not making a point of living alone for a time, the lair may be populated with any sort of lesser fey and a variety of ensorcelled humanoids.

On initiative count 20 (losing all initiative ties), the fey enchanter can use one of its lair action options. It can’t do so while incapacitated or otherwise unable to take actions. If surprised, it can’t use one until after its first turn in the combat.

Mirror Gateway. The fey enchanter chooses one mirror within line of sight and another that is anywhere within 1 mile. Those two mirrors are adjacent spaces for movement, spell ranges, and line of sight for spellcasting, but not for melee weapon or ranged weapon attacks. This lasts until the beginning of lair actions of the following round.

Befuddling Mist. A 60-foot-radius sphere anywhere within the lair fills with a thin fog that obscures thought more than vision. The area becomes lightly obscured for the duration. Creatures within the fog suffer disadvantage on Intelligence, Wisdom, and Charisma saving throws. The fog lasts 1 minute. (The fey enchanter is not immune to its effects.)

Ethereal Music. The fey enchanter chooses one creature within 120 feet. That creature hears ethereal music, and must pass a Wisdom saving throw (DC 18), or the fey enchanter chooses its movement on its next turn. The creature still has control of its action and bonus action, and may choose to Disengage before moving. The creature has control of its own movement if it uses the Dash action. A creature that succeeds a saving throw against this effect is immune to further uses of it for one hour. Creatures immune to the charmed condition are immune to this effect.

First off, designing lair actions is really fun. It’s a lot like working on legendary actions, but with a different scope of when the action can take place and what the fictional source of the effect needs to be. That is, Attack is a great (basically universal) legendary action, but a nearly nonsensical lair action. I’m not sure offhand if there are any creatures with lairs that aren’t legendary, but it doesn’t break anything to do so. What I’ve tried to create here is a set of tactics that give the fey enchanter a lot of chances to burn through that huge pool of spell slots and cause chaos in the party, preferably while the PCs are fighting other lair guardians (like the fey knight). The fey enchanter is not very good at dealing damage outright, but mirror gateway gives her scads of time to cause problems and make the party defeat themselves. Mirror gateway should also create some fun sharpshooting for characters with ranged weapons – since physical missiles won’t pass through the gateway, you want to use those to shatter mirrors that are, presumably, out of reach of melee weapons. At the same time, PC spellcasters can try to get a few licks in against the fey enchanter – which is why it’s so important for the fey enchanter to keep them busy with other guardians.

Ethereal music, especially combined with befuddling mist, is just straight-up abuse. It can only “juggle” one melee brute opponent at a time, and doesn’t work great against rogues, but it can make the target run a gauntlet of the fey enchanter’s own melee allies. I would strongly encourage not targeting the same PC with this multiple rounds in a row. It’s also intended to punish PCs for trying to ace the fey enchanter rather than burning down her minions, since it loses 90% of its rather horrifying effectiveness when the minions are dead or denied their reactions. If there are other traps or punishing terrain features, that helps too. Oh, and one other thing – it can bring a charmed or frightened target closer, so that the fey enchanter can shiv them.

The one self-imposed constraint of this creature design is that I’m using only OGL spells, since I have every intention of compiling this series on the fey into a PDF for Tribality Publishing (er, spoiler!). This cuts the sorcerer list down a bit, including removing crown of madness, which is so thematically on-point for the fey enchanter that it hurts. Of course, as every schoolchild knows, crown of madness is not great, which is why I’ve written an extensive critique and alternate version of it over in Harbinger of Doom. When I eventually use fey enchanters in my own campaign, you can bet that I’ll trade out one of those spells known – probably true seeing – for my version of crown of madness.