The Strange Case of the Half-Orc Champion 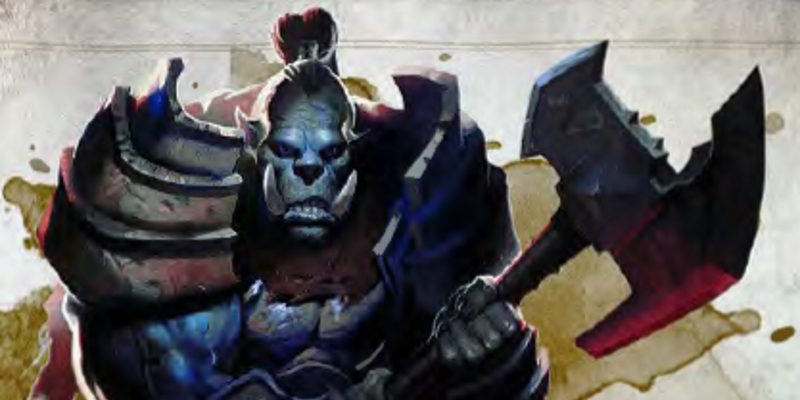 It turns out that having a bone surgically re-broken, getting some bone graft shoved inside you, and then having a bunch of plates and screws put in you doesn’t lend itself to quick recovery. What I am saying is, I’m still pretty medicated at this juncture, but I have tried my best to double and triple check everything below.

The April D&D survey results were released a few days ago, and I was not shocked to see the fighter as king of the classes. The fighter simultaneously offers the most passive archetype and one of the most active archetypes in all of 5th edition – the Champion and Battlemaster, respectively. Anecdotally, I have witnessed this very phenomenon in the games I play and run. Interestingly, I did not see half-orc among the top five races. Instead, you get the usual suspects. Humans, elves, half-elves, dwarves, and dragonborn are the most popular, which is as traditional as you get, in my eyes. Once you have dragon-people, people will want to play dragon-people. That’s just fantasy fact. Factasy. Weirdly, if you allow people to play squirrel people, Ratatoskr, then people will mostly be squirrel people. Everyone wants to be a squirrel person who drinks from Yggdrasil and gains cosmic knowledge.

I am not a big fan of articles that discuss optimization. There should never be a single best path for a class or archetype. A good system supports myriad playstyles and concepts. For the most part, D&D 5e does that quite well. There are some issues – ranger design, warlock design and the Grappler feat spring to mind – but you can go off the beaten path with concepts and still end up with a solid, functioning character in 5e. Races play a big part in the flexibility of 5e. While your stats do matter, the bounded accuracy of 5e means you probably don’t feel an undue weight to pick up a race for the stats alone, the way you absolutely had to in 4e, or else the math went real bad, real fast. Even though a halfling or dragonborn, both of which I will discuss later, might not have a bonus to Wisdom, playing one of those races and choosing to be a cleric is a cool concept and one that works fine in the game. Those three total stats will not make or break you, by any means. Is it “optimized for game play?” Maybe not, but I don’t like viewing combat as the be-all driving force of game play, either.

Despite my personal preferences, I know a lot of people really enjoy making the Fighter-That-Fights-The-Best or the Wizards-That-Wizards-The-Best. With the popularity of fighter, I was surprised to not see half-orc crack the top five races. Why? Half-orcs are the only race currently officially published that is just absolutely better at the core mechanic of an archetype than any other race. I am not talking about slightly better at some aspect, such as a high elf wizard being able to get an additional wizard cantrip or a rock gnome wizard always being slightly better at magical item history and identification. Half-orc simply gets an additional weapon die whenever they critically hit, and getting more critical hits is the core mechanic of the Champion archetype.

This doesn’t sound like that big of a deal, but as the champion progresses, the gap between half-orc and non-half-orc champions widens fairly quickly. Savage Attacks, the half-orc racial, allows you to roll one of the weapon’s damage dice when you critically hit with a melee weapon, and add it to the damage done. This is the same as Brutal Critical for barbarians, only Savage Attacks doesn’t offer additional scaling. In both cases, the feature encourages you to use a greataxe, but it’s still sort of a trick as the math below shows. Greataxe is 1d12 damage, so you get to roll an additional 1d12 when you critically hit, rather than using a two-handed sword, 2d6 damage, and getting to only roll a 1d6. This has been confirmed as the way these features work by Wizards of the Coast.

Now, of course this means the half-orc just does more damage on critical hits across the board, but the primary mechanic of the champion is increasing your critical hit range. You critically hit on a 19 or 20 beginning at 3rd level, and this increases to 18, 19, or 20 when you reach 15th level. This still doesn’t seem like all that big of a deal until you factor in the additional attacks the fighter gets as level increases. By the time the fighter reaches the second increased critical hit range, she has three attacks a round, and that increases to four attacks when she attains 20th level. This is to say nothing of using Action Surge and doubling the amount of attacks in a single turn. Let’s do a little bit of modeling to see this disparity in action.

I use the following assumptions for each modeling. The fighter has 20 Strength, and hits every time, since we are modeling damage. I’m also viewing this over an extended timeline, and basically stating that 10% means 1 in 10, and 15% means 3 in 20. The fighter uses Great Weapon Fighting, and thus the average damage of the weapon increases. The math I used for that is (3+4+5+6+1+2+3+4+5+6)/10 for 1d6, and so on. I know all of this math isn’t  a guarantee like that, but it’s not the worst thing to use these assumptions.

As you can see here, it’s not an insignificant, and in every case the half-orc does a considerable amount of additional damage. What’s more, you can see that the greataxe doesn’t really catch-up or surpass the two-handed sword for the half-orc, even though the designers encourage you to do so. It even remains worse with barbarians, it’s weird. Now, the critical hits themselves are more explosive, that can’t be denied. It’s only when you are looking at a long time line and averages where you can see the discrepancy. The greataxe is going to do more in a single critical hit, though not by a lot.

I am not pushing people to play half-orc champions, but I wanted to show the math behind my earlier statement of half-orc being the best at the class’s core mechanic. It’s weird. No other race does anything like this. The halfling racial feature of Lucky can be argued to mean the halflings are the best at everything else. It lets you reroll your d20 if you roll a 1 with it the first time. This does mean you are less likely to fail, all things considered. It’s a great feature, don’t get me wrong, but it’s not quite the same feature synergy as presented by the half-orc. Even the usual powerful suspects don’t exhibit anything like it.

Dragonborn almost always have excellent synergy with sorcerer, particular the draconic bloodline origin. While I suppose it is possible for a dragonborn to manifest a DIFFERENT draconic bloodline, I might glance at it askance if this was the norm. Sure, two different draconic parents is completely reasonable, and the outward appearance being different than the power of the bloodline is interesting, but still. At any rate, even if this was the norm, it just gives a little more in the way of options. The dragonborn sorcerer would get the ability to spend a sorcery point on a different resistance type for an hour, Otherwise, the dragonborn actually has a lot of overlap with the draconic sorcerer. They both get Draconic language proficiency, and they both get resistances based on dragon lineage, with the dragonborn’s being persistent as opposed to lasting an hour with sorcery point expenditure.

Even races that get spell progressions are only slightly better at what they do. A tiefling picks up a fun cantrip, and solid spells in hellish rebuke and darkness. Tiefling interacts pretty corner-case strongly with Devil Sight as a Warlock, but it’s pretty narrow. Genasi follow something of a similar path. A fire genasi picks up produce flame and burning hands. For the most part, genasi have always trended towards being some of the more powerful races, but in 5e it’s clearly not the case. Deep Gnomes, if you allow the Deep Gnome feat, get a lot of cool stuff and are more powerful than other comparable races, but again they don’t do an archetype’s core mechanical feature better than everyone else.

I haven’t forgotten humans in all this. Humans are a very attractive option, particularly if you allow them to start with a feat. Of course, everyone has access to these feats. A human just picks up an additional feat, and there is some flexibility there to allow stat reworking or the expansion of a concept. Feats are their own beast though, and while I can imagine people opting each time for feats when they are available, I can also see most people picking up two or three feats at max. I feel like the extra feat matters more at lower levels, but I am trying to look at everything holistically. What I am saying is, while this is very good, it’s not a runaway racial ability that allows them to just always perform better.

If it’s not clear at this point, let me state that I think racial balance is done quite well. I think there are attractive things about each race, this has been borne out in the games I play. I see a variety of races, and I don’t ever hear “that race sucks, you should have been X.” Not only do I think you should never do that to another player, I don’t think there’s much cause to do it in this edition. Sure you might miss out on a stat point or two, but in 5e, it’s not a big deal.

So why then do I bring up the half-orc? It’s not to say the half-orc is the best fighter, or even the best champion. It is, however, to point out a weird design quirk not present in any of the rest of the racial design. This is an artifact from earlier editions, and it definitely helps the half-orc stand out, but it does so in a way that seems to run counter to the rest of 5e design. The idea that a race is just better at a specific archetype doesn’t match up with all of the other provided information. Hopefully, Wizards of the Coast will take a look at the racial abilities at some point in the future and consider changing what defines the half-orc. I’m not saying it’s not a cool ability, but what I am saying is that it doesn’t mesh with the rest of their design.

Tribal Knowledge: You’ve Got to Know How ...

Registration is Open for Roll20CON