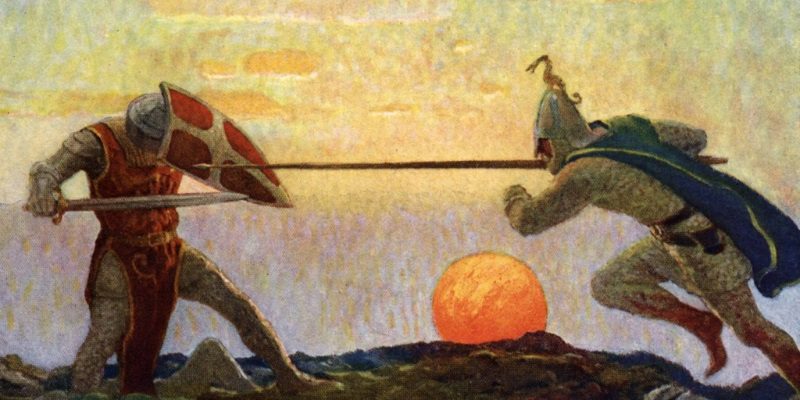 High-level gameplay has long been one of the toughest parts of a D&D campaign, for a variety of reasons. In 5th Edition, the game-balance issues of many earlier editions are greatly reduced, if not entirely solved. The adventures WotC has published bring characters to the threshold of serious high-level play (other than Curse of Strahd, we’re talking about 15th level or so) and then stop – leaving DMs to go it alone or end the campaign. In this article, I discuss ideas for how to make high-level play as satisfying as earlier levels. If your players get to high levels and have goals of their own that they’re invested in, then don’t worry about any of this article – just look for ways to make pursuing their goals bloody and inconvenient, because they’ve done the rest of the work for you. Come back to this article once they have everything they want, but they’re still looking to you for the next story.

I’ve run a number of games from first level (or whatever the starting stats are) up to the threshold of high level – 9th level in 2e, 13th level in 3e, 13th level in 4e (not a good example… 21st is the true “high-level” for 4e), and 5 dots in a primary Arcanum in Mage: the Awakening. My common pattern is that low-level sessions are single-session or two-session adventures (for the obvious reason that the PCs don’t have the reserves of power to do more). Low-mid adventures start stretching out a bit more in scope, with mini-arcs of 3-6 sessions. This continues into “mid-level” adventures – yeah, I know the terminology is imprecise. All throughout these adventures, I’ve been seeding other things, usually far more than I could reasonably run; this means the PCs have plenty of choices of things to pursue, or not. Finally, I run a big storyline that takes a whole heap of sessions; in D&D that single goal might take three or more levels to complete.

When it’s done – and I’ve been lucky that games have lasted long enough to finish their “big” stories – I have a bit of a problem. The players have solved the major problem that they invested time and energy into resolving. The central questions of the campaign are answered, and I have built all that I readily can on the foundation that I’ve laid. That is, my problem is how to cross the bridge into high-level play.

What I need to do, but never seem to consider when I’m on the spot in a campaign, is flash the timeline forward six months or a year, so that the characters rest on their laurels a bit and enjoy the fruits of their victory, rather than trying to have them move to the next thing in-character. This makes sense to the English majors out there who think of Freytag’s pyramid. The adventure that ended mid-level play was a climax. I need to embrace the denouement and let the tension ease off for awhile. This doesn’t have to last long – even one whole session might be stretching it. Once the tension has tapered appropriately, I should start in with new exposition, either picking up on earlier threads or introducing new ones. Instead, I try to jump from the climax to a new rising action.

A campaign’s structure plays into this dynamic as well. For these purposes, I think there are four structure choices (if you can think of more, tell me):

You don’t have to adhere to one structure for the whole campaign. It’s entirely possible to run a sandbox game with a procedural adventure as an interlude, or to fold elements of the serial drama into a procedural game. As I suggested quite a while back, every structure benefits from using character drama as a seasoning, even if you don’t like it as a main dish. Anyway, this is a massive digression, but it lets me talk about how each structure interacts with the transition to high-level play.

The transition is maybe the most direct for serial dramas and sandboxes. They’re the default formats for D&D and games of its lineage. In these games, high-level plot builds on the conflicts and themes of low and mid-level play. A lot of people don’t care about thematic consistency, but as a games-as-art kind of blogger, I’ll suggest that thematic dissonance does subtly damage the experience of the game for those involved. Using the previously-established conflicts is just being efficient, since the players already care.

Note: if you had a plotline or conflict fall flat, don’t bring that one back into focus unless you are sure that you have come up with a new development that will retroactively make their previous experiences more compelling. This is possible, but it takes careful thought. You don’t really want high-level play to feel like the typical Hollywood sequel.

The reason this sense of continuity is so important is that you aren’t in the initial phase of exposition anymore, and it’s just a little harder to build a lot of new emotional connections. Not using context that you’ve already developed is just leaving money on the table, up to the point that you’re completely stuck for ideas.

Serial dramas and sandbox games both expect high-level play to focus on being Bigger and Badder – each challenge should top the ones that came before it in some way. Evading this expectation is what makes procedural drama so interesting as a model. I should really write this up in a separate post at some point, but the point is that in procedurals, a mystery or heist doesn’t have to top the one before it, because the reversal is allowed to throw the characters and increase the challenge of just that one episode. Procedurals live and die by creative recombination rather than scaling, though I wonder if that stays true in tabletop procedurals – I haven’t actually played enough to know if my assertion holds up in use. Anyway.

Character dramas really want to avoid ever letting one character definitively “defeat” another – there always needs to be a way for a defeated party to withdraw and regroup so that the conflict can spark again in a later session or episode. Much like the purpose of NPCs, characters develop new powers and talents in character dramas just so they can come into conflict with one another in new and interesting ways. For example, imagine Ars Magica run as a character drama (something I think it does uncommonly well, given its troupe-style play). As lowly novices, the Wise clashed with one another in a shifting web of alliances, collectively struggling against the power of their cruel teacher. By the time they reach high level, they are masters of their respective specialties, each ruling their own networks of supporters and apprentices – or even assuming control of whole Houses. The conflict never stops, though – each time they come into conflict, someone wins and someone loses, but they never quite come around to killing one another. After all, no one else in all of Mythic Europe has enough power to be their peers. You never know when today’s enemy might be tomorrow’s ally, and vice versa. As long as the stakes and methods of the conflict keep changing, character drama stays fresh and interesting.

If you’re going to use any of these, start seeding the possibility of them over the course of mid-level play, so that they’re a logical conclusion rather than a sharp left turn.

In An Unusual Manor

As a reward for their heroics, or as an inheritance from a (cosmically) distant relation, one or more characters come into ownership of a luxurious new manor house, townhouse, castle, or the like. (This idea is partially cribbed from Fallen London, and partially from the Defenders of Daybreak and Tales of Wyre story hours on ENWorld.) It’s like shifting into domain-rulership play, but the real estate is somewhere weird. Maybe it’s a bit of a white elephant, but too awesome not to at least explore as an option. Make sure you bait the hook well, though – if your players decide to mothball the place and move on with their lives, you’re back to the drawing board.

Some great options for this are, in no particular order:

There’s a deep instinct in a lot of GMs to shy away from the big, bloody consequences, because outcomes are hard to predict and you can’t put toothpaste back in the tube. When we’re talking about high-level play, though, say to yourself: “The hell with it. What am I saving all of these awesome crises for, if not for this? If the new status quo sucks, we can either move on to something else in this campaign, or let this campaign go and start something new.” Anyway, the reason this works well is that having to fight a former friend is such a rich ground for roleplay.

In this vein, I would suggest looking for wedge issues that divide the players from their most powerful allies. These ideas are best suited to campaigns that share the theme of The Dark Knight: “You either die a hero, or live long enough to see yourself become the villain.”

‘Tis Not Too Late to Seek a Newer World

A broader version of In an Unusual Manor is to have an area of the setting that is off-limits to the players up to that point. If that new area is wild and dangerous enough, they’re kind of going back to their roots in the action, while also raising the stakes and intensifying the dread (since they’ve heard for ages how dangerous this place is). The trick is making the barrier and its solution reasonable in-play things.

The problem that these ideas particularly solve is that they explain why all of this high-level content hasn’t been wreaking havoc in your setting all along. Some people are okay with ignoring how these high-level baddies were just busy with something else and not really disrupting the status quo. For other players, that’s a quick way to ruin their suspension of disbelief. If the off-limits condition works both ways, you’re set.

But What Kind of Newer World?

So it’s great and all to speak in such generalities about new places to explore, but let’s get more specific. In a sense, the easiest way to come up with such a thing is to pick one or two features of a normal place and give them an outright bizarre level of more-ness. If you did a whole lot of this in series… congratulations, you turned your campaign into a fantasy version of Star Trek! (Nothing wrong with that.)

In which I totally name-check a lot of the longest threads in ENWorld’s history, among other things. The fact that I list these alongside quite famous fantasy series and other things should not be taken to imply anything other than extraordinary usefulness.

I hope this collection of ideas sparks something new and fun for you next time your campaign reaches high levels (whatever that means for your campaign) and you need a new challenge.

The Secret of Zir’an, Part 3