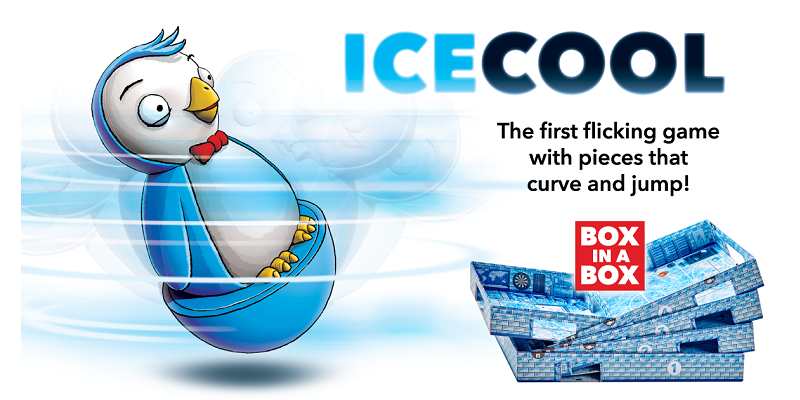 One of the “cool” games that had a US release at Gen Con this year was Ice Cool by Brain Games designed by Brian Gomez. I was able to get a thorough demonstration, and have been playing it ever since I left Gen Con last week. Lots of flicking and strategy, and the game gets tougher and faster as players get better at moving their pieces around the board.

It has won several awards already, there are lots of reviews from other countries that you can read and play-throughs to watch. And in my opinion even though it is labeled as a children’s game, I found it very entertaining playing it with any age group. The Box in Box setup is ingenious, and the game easily stores away after playing.

I highly recommend getting this game! Especially if you have kids. It should be available in the US soon.

Here’s a video of the demonstration from the Exhibit Hall at Gen Con that I took:

And this is the Gen Con press release with more information for you:

Ice Cool was launched for the first time only two months ago in United Kingdom and it will be launched in more than 16 countries worldwide during 2016. Right after the launch, it immediately received high recognition. It received the UK Games Expo Award 2016 as the Best Children’s Game 2016, Silver Award in the category “Game Expo Player Award” within Imagination Gaming Family & Education Games Awards 2016 in UK and the Seal of Excellence from The Dice Tower by Tom Vasel. 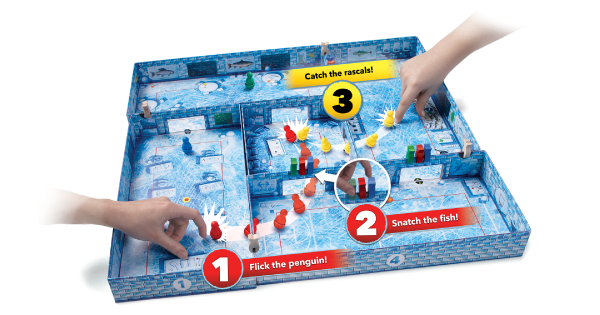 “This is one of those games that when I saw demoing it for the very first time, I said I must have this game. I love the concept, especially going from one room to another. It’s super fun! I love this game, I love the board, I love that this is a box, everything here fits in the box but when you set it up it’s a really cool board. The Dice Tower judgment: into my collection,” said Tom Vasel on The Dice Tower.

After two years of development and prototyping, in 2016, Brain Games introduced a new board game featuring two major innovations that make flicking more exciting and game setup faster. The special form of flicking pieces creates a new bag of tricks – players can make the pieces slide, curve, jump, dive or bump against the walls as you can see in the video. Another innovation is a new Box-In-A-Box game-board concept that is very quick and easy to setup. Each Ice Cool game contains 5 boxes that players fasten together with pins creating an immersive 3D game board in less than a minute.

Ice Cool is a children’s game for 2-4 players ages 6 and up and takes approximately 30 minutes to play. In each round one of the players catch other penguins, whereas others try to run through several doors, thus gaining fish on their way. The winner is the one with the most points on their fish cards.

I’ve put a link for the promo video:

and an 18 minute play through video (2 adults & 2 kids) with a review that you might like (English accents and all) from Board Gaming At Home, and The Dice Tower Review from Tom Vasel:

Thanks for stopping by,