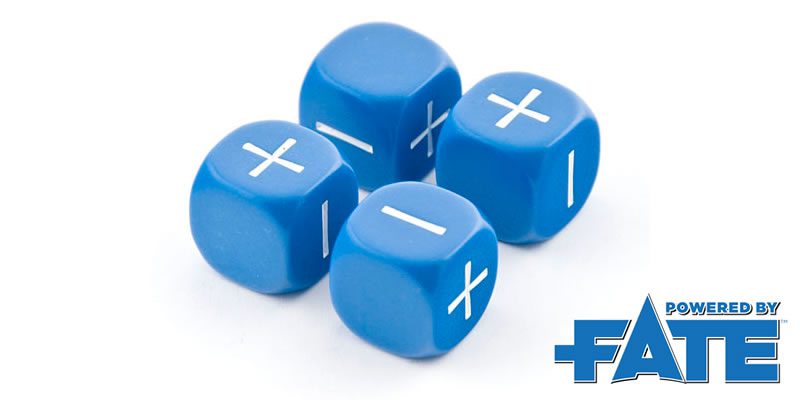 Last week on the Campaign Trail I looked at improvisation and using story cubes for ideas. This week I wanted to look at using Fate (or Fudge) dice rolls to help you improvise during your game.

A Quick Note on Improvisation

Improvisation is a very spontaneous performance without specific or scripted preparation. Tabletop RPGs, such as D&D, are cooperative events that owe as much to improvisational theater as they do to traditional board gaming. Improvisation is an essential skill for both gamemasters and players in any tabletop roleplaying game. A little improvising at your table can be the difference between a good gaming session and a great one that you’ll remember and talk about forever.

Your players ask you if they can do something and you aren’t sure how things should go. Most gamemasters (GMs) I know like to have players roll the dice and let fate decide. I know some GMs who let actual FATE dice decide, even when playing a D20 based game like D&D.

Fudge or Fate dice, are custom six sided dice which have an equal number of plus, minus and blank sides. A number of these dice are rolled, usually four at a time (or 4dF), and for every plus side that comes up is considered a positive and for every minus side that comes up is considered a negative. Using these dice you’ll get results from +4 all the way down to -4, indicating how positive or negative an outcome is. If you don’t have these dice, six-sided dice (4d6) will work fine with 1-2 being negative, 3-4 being neutral and 5-6 being positive. 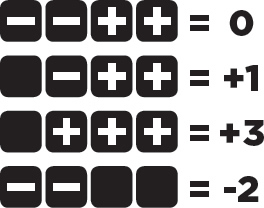 If you have some of these dice around they can really help you decide if something should go positive, neutral or negative for your players. This can work for anything where you want to add a little randomness to the world to go along with what your players roll. I really like using these dice when I feel like a bunch of checks by the players are going to be routine and a little bland.

Let’s look at the players setting up camp and watches while traveling through the wilderness. I had no idea they were going to make camp at this location and I don’t have an encounter planned. I could just roll a d20 for each watch or I could add in a few Fate dice rolls behind the screen to add another element of randomness. Let’s try it out in an example below with a group of companions setting up camp for the night in a forest.

This is a pure neutral result with 2 neutrals, a negative and a positive cancelling each other, for a 0. I’m going let them get away without having to face a random encounter on this watch and let it pass by without any events.

If there is anything out there, it would have to be pretty stealthy to avoid being detected by Perrin.

GM: “Perrin, the cold night air keep keeps you alert and you are happy to have the small fire for a little warmth. You don’t see or hear anything for the entire watch other than the hoot of a far off owl. It’s almost too quiet, but you are happy to finally get some rest as your watch ends.”

This is a strong positive result with 3 positives and a neutral, working out to a +3. So now I should really do something to benefit the players. Let’s roll on my random table with benefits or just come up with something helpful like fairies, a shooting star, a cloudless night with lots of moonlight, or a white stag to lead them to a hidden grove.

If there is anything out there trying to be quiet, its likely going to avoid being detected by Mialee, but with a strong positive I don’t see a need to put any obstacles in front of the players this watch. Let’s have a bunch of fairies protecting this forest and any good people who travel through it.

GM: “Mialee, the middle of the night passes by quietly as your companions sleep around the fire that you keep alive. After a couple of hours you see a small dim light off in the distance that you feel is no threat. As the light moves closer, you see that it is a fairy. Just as you are thinking you should call out to your friends, the fairy smiles at you, then hands you a flower. The fairy turns away and laughs, fluttering off into the darkness. As quick as it arrived, it is gone. Perhaps the friendly folk of this woods are looking out for you as you see the odd light here and there for the rest of your watch.”
Sally: “I’m going to keep this to myself, I know Flint isn’t a big fan of fairies after what happened last time we met some.”

This is a negative result with 3 negatives and a positive working out to -2. I should do something that provides some hardship for the players, but I need to take into account the rest of the night and the fairies keeping watch. So I quickly roll on my forest random encounters table, which comes up with 2 owlbears.

GM: “Eddy, roll a perception check for Flint.”
Eddy: “Not good. I rolled a 7. Sorry everyone”

I’m going to let the fairies warn Flint about 2 owlbears that are going to attack, even though he would have missed them.

GM: “Flint, the end of the night passes by quietly as you envy your companions sleeping around the fire, which you’ve let die down. You catch yourself about to nod off when you see a bunch of tiny lights rushing towards you. Flint, you are faced with six fairies all around your camp.”
Eddy: “Not these little gnats again! I take out my axe ready to fight, ‘It’s time to swat some flies’, I yell to my friends.”
GM: “It’s a good thing all these fairies rushed in and you awoke your friends. You catch two owlbears charging in at the edge of your darkvision and your friends have enough time to grab their weapons, but they are still lying down, prone. ROLL INITIATIVE everyone.”


You can use fate dice, a d20, a d100 – whatever you like. In this example, I was looking to add a positive, negative or neutral to the player’s perception checks while a group made camp and set-up watches. I often roll fate dice when my players are investigating a room for hidden objects that I didn’t plan anything for, walking through a town trying to avoid the city guard and anything else where I’m not exactly sure how I want the story to go and I’m looking for some direction.

Some time in a future article I’m hoping to look at improvisation and random tables. I’ll likely look at what trouble players can get into while carousing during downtime, traveling through wilderness and quickly coming up with trinkets and treasure.