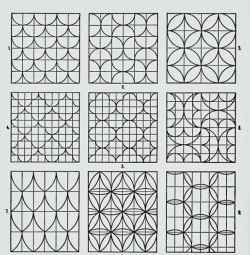 Wizards (and other magic users) are typically people who use book smarts and long hours of study to learn how to warp the nature of reality, forgetting them after casting. Sorcerers use the force of their personality, sometimes combined with unusual heritage, such as having draconic ancestry to cast spells. Warlocks make deals with unfathomable extra-planar entities to gain power. Druids, clerics, and monks all gain their abilities and spells based on their levels of wisdom. But these tropes don’t necessarily need to show up in your games. Why not use weaving as a magic ability? It can’t be done you say? Read on!

This idea originally shows up in David Drake’s “Lord of the Isles” series. Ilna os-Kenset is a hardworking, 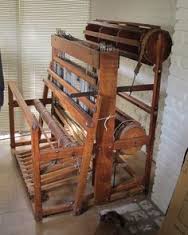 hard-nosed, no-nonsense, but efficient and skilled weaver. Then after being taken and then escaping a demonic realm, she gains the ability to weave powerful patterns.

Patternists or Weaver Witches as they’re often called are known for their complex weavings through which they cast their spells. But just because their main ability centers around weaving, don’t think they’re powerless without their looms. Their ability is to make and shape patterns, an ability that is most apt  and easily showcased in weaving, but anywhere they can create or manipulate patterns, even if it’s with a skein of yarn, a chalk design, or even quickly creating a trail of sparks or smoke in the air, they’re formidable foes.

The majority of their powers rely on the sight. Both in that their patterns need to be seen, and in that the Weaver Witches themselves need to see in order to be able to create the patterns.

Strength is unnecessary, as their main ability is weaving.

Dexterity is the main stat and helpful for weaving or creating delicate, complex patterns. The higher the dexterity, the faster the weaver witch can weave her spells.

Constitution is the stat that determines how many spells per day she can weave; a Weaver Witch that can’t weave, can’t cast her spells.

Intelligence: Useful for getting extra skills only.

Wisdom is the caster’s spellcasting stat, because they need to know not only what spells to cast, but when to cast them, and how to form the spells through their weaving. Additionally, it helps them with their own will saves.

Charisma isn’t necessary unless she is the party’s face.

The character must take at least 6 ranks in both “Craft: Weaving” and in Knowledge: textiles, earning a +2 synergy bonus in both skills. She has unparalleled ability to recognize the value, craftsmanship, and usefulness of anything woven or crafted using cloth, be it backpacks, clothing, tapestries, and more. This ability allows her to instantly know if a rope bridge is safe, what a Cloak of Elvenkind does, and whether you have a Bag of Holding OR a Bag of Devouring.

Such characters should also put skill points into such skills as investigation, spot/ listen (or perception in pathfinder).

Some abilities to consider for such characters:

Make A Rope Bridge: With enough rope, Weaver Witches make excellent rope bridges that will hold several people at once if they’re using their own rope/ yarn or such that has been in their possession for 24 hours or more. 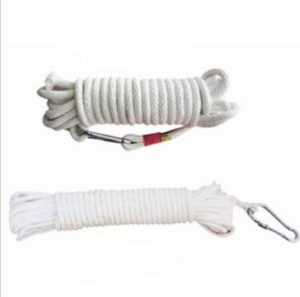 Escape Mundane Bonds: Any sort of mundane cloth, rope, or leather bindings less than Escape Artist DC 25, the Weaver Witch escapes without any problems due to their knowledge of knots, patterns, and the like. This would include those made with an animated rope.

Hoist/ Climb: Provided that there is something for their rope to latch onto, Weaver Witches can either tie knots into the rope or create a woven net with which to haul someone else up with.

Weave with others: The Weaver Witch can combine her abilities with other weavers to make more complex weaves. For every weaver who contributes to an overall weaving the number of days it takes is reduced by a day, except if a weaver makes a check against DC 25, in which case the time is reduced by 1d4+2 days. On a failed check, there is something not quite right and that day’s weaving is ruined.

Glimpse Fate: The Weaver Witch can look at someone (or a group) and see what the target’s (or targets) fate is in the next 8 hours. This is similar to the Weal or Woe spell, and gives only hazy details as to the happenings. This can be done as many times per day as the Weaver Witch’s Wisdom modifier+ ½ the Weaver Witch’s levels.

Weave Beforehand: this is akin to scroll, except that the spell is done as a weaving. Unlike a scroll, it’s not consumed when used. It takes 1000GP X level of the spell being woven in material costs, plus 1d4+2 days per level of the spell. This can be reduced by a day (to a minimum of 1 day per level) by making a check against DC 25 once daily. If this check fails three consecutive times, the entire piece is ruined and must be started over again or another 1d4+2 days of work added to the completion of the project, although the materials can be used again most of the time, except if all rolls are a natural 1, in which case the materials are wasted. This assumes the weaver is working for 8-10 hours a day, taking appropriate breaks for eating and other necessities.

View Fate: as per glimpse fate, but this gives more concrete details as far as “who, what, where, when why and how” in terms of the happenings, and for the next 24 hours. This can be done as many times per day as the Weaver Witch’s Wisdom modifier+ ½ the Weaver Witch’s levels.

Alter Fate:  The Weaver Witch can pick at the threads of the target’s fate to produce a variety of effects:

Bless: as per the cleric spell

Curse: the following effects can be produced:

Cause Disease: target gets a random (or selected) disease

Reduce: as per the spell reduce/ enlarge, save duration is permanent until dispelled 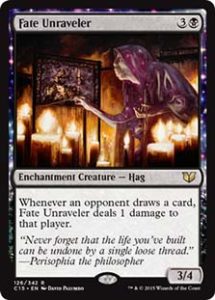 Unravel Fate: This is the ultimate ability of the Weaver Witch, a kind of an ultimate curse, which can be done a number of times equal to her wisdom modifier. All stats are reduced permanently by 1d6+2 (having a ripple effect on the target’s skills, HP, etc.). If the target has any class levels, it also immediately grants one negative level per bonus point she has in wisdom. This can be attempted as many times as the weaver has a bonus to their wisdom. The target must save vs DC 25+Wisdom bonus + Weaver Witch levels. Should this ability fail, the Weaver Witch is stunned for 1d4+1 rounds. If the target saves, they are immune to this ability for 24 hours.

Weaver Witches are proficient in only sewing implements such as needles, knitting needles, knives/ scissors, and a weaving shuttle. The clothing they produce to wear counts as studded leather, though not as restrictive. If given time to weave / fashion their own armor, they will make padded armor with the protective nature of scale male.

More on the Weaver Witch Next time