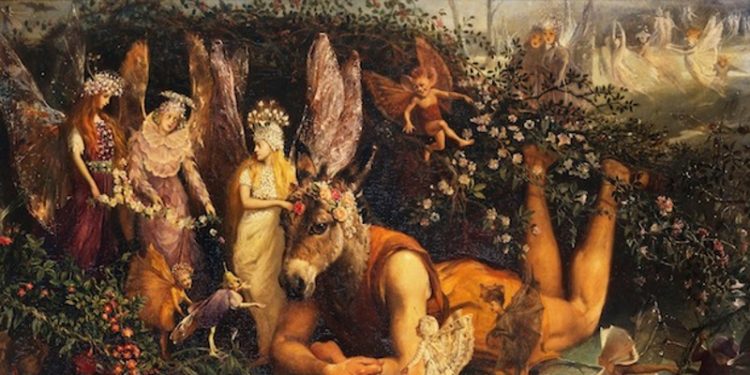 A few conversations about my series on the fey reminded me that there were more articles I wanted to write, so this week I’m taking a break from talking about the monk. D&D divides the fey into Summer and Winter Courts, which it may or may not call the Seelie and Unseelie. As a general rule of designing conflict in games, though, never go for two-faction conflict when you can instead have three. There are also great examples in other fey-related games – more than I can cover here, but at least I can make a start of it.

Let’s be as clear as possible about what goes on with the Summer and Winter Courts before we get into variations. This will necessarily be an oversimplification, because we’re talking about immediate game usage rather than a graduate-level Folklore Studies class. With that in mind, the Summer Court’s central ideas are Glory and Joy, while the Winter Court’s are Fear and Revenge (or maybe Sorrow). Neither court gets to claim Beauty/Ugliness or Kindness/Cruelty as their core themes, because those elements show up on both sides of the fence in great measure and in different ways. The Summer Court’s warriors tend more toward grace (physical and social) and valor, while the Winter Court tends toward hulking bruisers without a lot of intellect to spare. The Archfey themselves don’t necessarily reflect this.

This model appears in Changeling: the Dreaming, as well as one of Ian Lemke’s other Greatest Hits, the Shattered Isles LARP setting. After all, if you’re going to steal a great idea, stealing from yourself is perfect. (I don’t actually know who had which ideas in writing C:tD or SI – both were collaborative works of many writers.) C:tD has a number of groups that are outside the Seelie/Unseelie dynamic for various social reasons, but their Spoiler Court is the Shadow Court. It’s an ideal piece of writing for the game’s needs: players can be Seelie or Unseelie, even within a single PC team. That can be grist for plenty of drama, but the Shadow Court gives them an insidious external threat to unite against.

C:tD’s Shadow Court is about the death of dreams and inspiration, making them antithetical to both the Seelie’s inspiration by example and the Unseelie’s nightmarish sense of wonder. Let’s call their central ideas Death and Loss (of memory and youth in particular), since they’re inspired by Ray Bradbury’s Something Wicked This Way Comes. If you’ve gotten this far in life without at least seeing the library scene from that movie, here you go. It’s Jonathan Pryce at the height of his powers.

In Shattered Isles, there were two Spoiler Courts, and since we’re talking about a game that mostly didn’t have Fair Folk as PCs, their purpose in the story was considerably different. The first was the Goblin King and his goblins, who were… nothing at all like D&D goblins, for starters. As I mentioned back when I wrote about the Dream-Tyrant Archfey, SI’s Goblin King began as an antagonist and developed, through PC interactions, into an ambiguous ally. Especially in the earliest interactions, his purpose really was to be a spoiler in the contests between Seelie and Unseelie, by throwing support to one side or the other, or by breaking the rules of the contest outright. He also released the genies from their long imprisonment, as far as I know just to bedevil the rest of the Fair Folk. The Goblin King was the wild card in any situation with the Fair Folk, and that’s a great kind of character for tabletop games as well. I would say that his central ideas were Treachery and Transformation, but some other people who will read this post (including the person who played him) know a lot more about what was going on there, and should feel free to provide other interpretations.

Shattered Isles also had a Shadow Court, which was something like an insurgent faction of the Unseelie Court that wanted to seize power over the Fair Folk in general. According to one of the game-runners that I asked about it just now, they were a coalition of outcasts. Their general style was manipulation, misdirection, and information brokerage. Let’s call their core ideas Corruption and Hatred. Probably the closest parallel to their style in published D&D adventures is the Red Wizards of Thay in the Realms, as they’re always looking for ways to play both sides (the PCs and the adventure’s main bad guy) against the middle, or allying with the main bad guy to get an edge on Szass Tam.

Introduce a Spoiler Court once you’ve firmly established the Seelie and Unseelie. Early on, they avoid drawing the ire of both courts at the same time. As their power develops, they move on to creating problems large enough to distract both courts simultaneously, preferably focusing that attention on a third party. Finally, they have gained enough power to usurp one court while keeping the other off their backs, or to threaten both courts together.

If you’re using the fourteen Archfey archetypes that I have sketched out in this series, you could compose a Spoiler Court from the Dream-Tyrant becoming the Good Fellow’s cat’s-paw, from the Eldest returning in diminished form, or from the Green Man concluding that the Courts were growing stagnant and sick and lending his support to a collection of upstart fey nobles of less than Archfey status.

As seen in Changeling: the Lost, you can also split the Seelie into Spring and Summer, and the Unseelie into Autumn and Winter. C:tL attaches Joy to Spring, Glory to Summer, Fear to Autumn, and Sorrow to Winter, if I recall correctly. This undermines dualistic opposition from the start, probably making it easier for characters of separate courts to get along in a single party. For more D&D-like purposes, where most party members don’t have a Court affiliation, the main result is that it strongly colors encounters according to the in-game calendar. If you’re running a particularly fey-heavy campaign, maybe the ascendant court governs the tone of adventures, without having just two alternating modes like you would in a Seelie/Unseelie model.

As with any mythic thing that comes in fours, there are plenty of other correspondences to construct – the Aristotelian elements, the cardinal directions, or even the four core party roles of D&D. What’s that you say? Aristotle named five elements and I need to decide what to do with aether? Fine, I’ll say the fey are fundamentally composed of aether (as humans are made from clay or dust), and when they manifest in the Material Plane, they choose alignment with one of the other four elements.

Courts of Past, Present, and Future

This alignment may be a bit more of a stretch, though I’d point to Neil Gaiman’s Sandman as one case of its use, if you accept the Endless as close-enough matches for the fey (Daniel is the Future). Obviously, the Sandman mythos also has fey in it, but let’s not get bogged down on that point. When a group of unwitting mortals release the Eldest, the Seelie and Unseelie come together into an uneasy alliance. To bolster their position, they exert as much power over mortals as they can, recruiting armies of mortals through glamour or terror. The Eldest call themselves the Court of Starlight, while the united Seelie and Unseelie become the Court of the Midnight Sun.

But two of the Archfey cannot just bind mortals to their will and sublimate their innovative spark. The Dream-Tyrant must have their nightmares, freely dreamed, to stock his Labyrinth. The Muse of Steel needs mortals to create new inventions, which she can inspire in them but not make for herself, to oppose the Eldest. These two Archfey form an alliance, the Court of Dawn, to overthrow both the Eldest and the united Courts. Their goal is to usher in a new age of mortal awakening and war, which probably looks a lot like the real-world Enlightenment. In this three-way conflict, the Night Collector becomes the ultimate information broker and free agent.

This arrangement is probably an end-state, appearing in your campaign’s high-level play, rather than the early default. It grows out of a Spoiler Court successfully recruiting PC agents, possibly even assassinating or imprisoning one of the Archfey. Most players I’ve ever known would ally with the Court of Dawn, since they’re the only one that even accidentally has a few of humanity’s best interests at heart. This is great for the DM’s purposes, of course, because that’s the underdog faction, and especially in high-level play, you want the PCs to be as outgunned as possible.

There are any number of other possible arrangements, just depending on what you establish as important. I wouldn’t go much above four Courts, unless you’re breaking them up by region rather than concept – in which case there might be just one Court, ruled by a single High King/Queen, or a married pair. Changeling: the Dreaming uses exactly that as its recent past, a system that is beginning to fall apart at the start of play.

It turns out that I also have a few more articles on the fey I want to write. Since the Archfey Patron is both badly flawed (in my view, anyway) and locked out of the OGL, I plan to write a Fey Highlord Patron to be OGL-friendly, and to be a baseline chassis for the variant features I wrote about in the Archfey Patrons articles. It may wind up getting split into Seelie and Unseelie versions, just depending on what I have to do to be different from the Patron in the Player’s Handbook.

I’m also working on a Favored of a Fey Highlord feat, but feat design is a real pain and I have plenty of work left to do to get that where I want it. Fortunately, the PCs in my own campaign are interested in prodding me to work on it so they can playtest it!