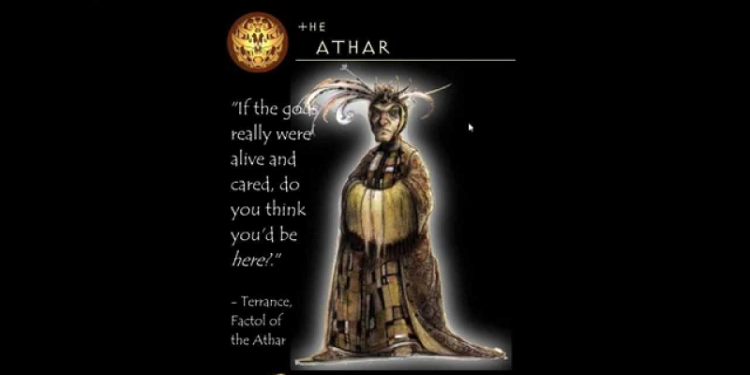 If you aren’t familiar with traditional factions of Planescape, there are fifteen of them. The factions are not about good and evil so much as expressing specific ideologies and providing philosophical counterpoints to the other factions. As someone who isn’t all that into traditional explorations of good and evil, I’m a big fan. Hot on the heels of creating some magic item special features for Planescape, I started working on some of these faction backgrounds for players – just in case they wanted to start as members of factions. I’m tackling this in alphabetical order, unless there are requests for specific factions. Today brings us the Athar (also known as the Defiers or the Lost) and the Believers of the Source (also known as the Godsmen).

You have spent your life as a member of the Athar faction. You have spent your life on the planes – or at least in Sigil – and you do not doubt the strength of the Powers, just their divinity. It only follows that their lack of divinity dispossesses them of any right to divine judgement. If these Powers are not divine, they should not be worshiped. That isn’t to say none of your faction are priests – far from it, in fact. The Athar teach that behind these Powers is the Great Unknown – the source of all power in the multiverse. This is the true divine force – though it neither sits in judgement, nor asks for worship.

The Athar headquarters in Sigil is located in the Shattered Temple, a temple once dedicated to the now-dead god Aoskar. Athar – called Defiers or the Lost by others –  train to identify locations such as this – places that were once sanctified in the name of a Power, but no longer serve that purpose. It is here they make their homes, hoping to tap into the potential contained in these locations. They travel the planes looking for answers to questions of the Great Unknown, and ways to better understand it. Were you one of the explorers? Someone who performed research into the questions being asked? Or were you maybe one who sought to refute the claims of those who worshiped the “gods”?

Feature: Finder of the Forgotten
As an Athar, you have learned the location of many abandoned places of worship. When traveling, you can expect to know of many places and how to generally reach them. You also know if the specific abandoned area is consecrated or desecrated once you have reached it as a result of a successful navigator’s tools check as determined by the DM.

Members of the Athar are shaped by the beliefs of their faction, and their experiences on the planes. Their study into – and skepticism of – the concepts of divinity impacts how they think and behave. They might believe themselves superior to those who find faith in the gods because they “know the truth,” or might be recklessly driven to prove that truth to others.

Believers of the Source

As a member of the Believers of the Source, you spent your life attempting to perfect yourself. You have been taught that while there are absolutely divine beings within the multiverse, they were not created that way – they attained that state. The spark of divinity resides within all beings, but few manage become divine. According to Believers of the Source, the multiverse offers myriad opportunities for refinement and growth – the opportunities are just misinterpreted or missed.

The Believers of the Source headquarters in Sigil is located in the Great Foundry. This is a symbolic place to organize, as the Believers of the Source – called Godsmen by others – are quick to state that all sentient being can be reforge in the flames of the multiverse. Believers of the Source do not always seek to refine themselves. Some focus on the potential of others, hope to influence and shape the next generation of divine beings. Are you one who travels the planes looking for ways to better and challenge yourself? Were you someone identified by the Believers and brought in the fold? Have you already failed your first challenges and are looking for ways to prove your worth? Or are you one who looks for the divine spark in others and hopes to cultivate it?

Skill Proficiencies: Insight, Religion
Tool Proficiencies: Smith’s Tools or Herbalism kit
Languages: One of your choice
Equipment: Smith’s tools or a set of vials of distilled water containing different crushed objects within them (doubles as an herbalism kit), a flask of strong alcohol, a set of common clothes, a bed roll, a steel mirror, and a belt pouch containing 5 gp

Feature: Potential Pleasantries
As a Believer of the Source, there are many who will welcome you into their homes or establishments without any expectation of payment or favor. Simply being in the presence of one who might become divine – or be identified as possessing the spark of divinity – is enough for many. You can expect food, accommodations, discounts on goods, basic medical treatment, and lodging from those who accept you into their homes or afford you honor within their place of business.

Believers of the Source are guided by their belief in divine potentiality over all else. They believe all gods were once mortals as they are. They might believe they possess this divine spark themselves – often believing themselves superiors to others who they identify as lacking the divine spark, or having wasted it. Others might be more humble, seeking to bring out the best in others no matter where they travel.