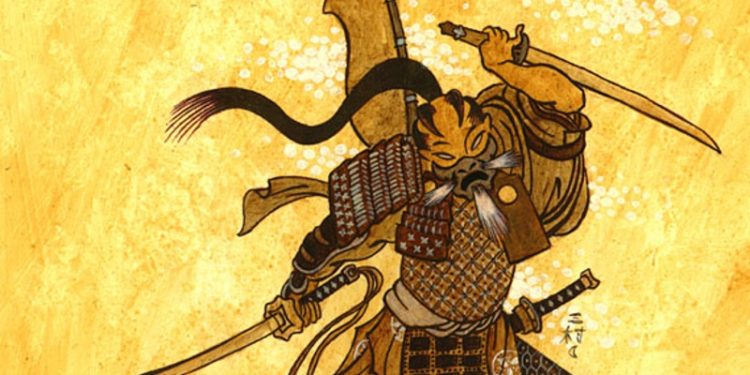 At a reader’s request, I’m going back to the 3.0 Oriental Adventures and covering the monk prestige classes found there. In this series’ broader conversation on monks, this and the 1e Oriental Adventures are our only examples of settings that explicitly do suit monks, without even a whiff of Eurocentrism. Because it embraces Rokugan, OA and its monks lean heavily toward mythic Japan rather than mythic China or India. Some of the other OA classes are more appropriate to mythic China, such as the wu jen, and WotC released an electronic supplement for mythic India, Mahasarpa (link goes to a PDF).

Monks in Oriental Adventures receive subtle mechanical tweaks and vast, if backhanded, thematic shifts. Keeping in mind that Rokugan – that’s the Legend of the Five Rings setting – is the default 3.0 OA setting, not only are monks not getting shoehorned into a fantasy-medieval-Europe pastiche, they’re painted as deliberate outsiders of Rokugan’s clan-first society, in a setting where clan affiliations and social rank are the most important part of all character interactions. Oh, sure, monks are outsiders in the core D&D default setting too, but D&D’s default settings tend to be anachronistically egalitarian – outsiders are more often judged on merit than their existing social ties. It’s a world where status matters, and monks neither have any nor accrue any.

On to the mechanics:

To my mind, this is a good postscript editing pass on the monk, plus a bunch of mechanics-first faffing about that. Reading the whole section on martial arts forms and styles only suggests to me that I’d like to see monks written up as a subclass or variation within fighter. Probably all fighters should get some kind of better-than-1-damage brawling option, because I’m pretty sure that is part of the image and fantasy of fighters, so the rest of the absolutely-necessary monk features get loaded into the subclass. Treating the ki pool as more different Combat Superiority is pretty one-and-done, right?

But I digress. Let’s talk about the monk prestige classes. The Tattooed Monk is all but unchanged and won’t get more page-space here, except to say that Oriental Adventures has no interest whatever in spilling the beans on the ultra-cool secret backstory of L5R’s Tattooed Monks. Way to bury the lede, y’all. Don’t get me wrong, I appreciate uncovering secrets during play more than damn near anyone, but when the presented flavor text is utterly generic and offers no hint of the coolness, probably no one will ever find out the rockin’ awesome backstory.

…I digressed again. Look, if you’ve been reading my column here for any length of time, you should just know that’s the flavor it comes in.

The henshin mystic is about enlightenment by awakening divinity within, which apparently involves a lot of perception and fire-related features, as well as picking up a decent number of the core monk features they’d be missing, like Diamond Body, Ki Strike, Empty Body, Timeless Body, and most of the effects of Perfect Self. The names of the features imply a trickster-monk, but the rest of the text backs off that.

Well, a fire monk that does fire things and also has strong perception features is good times. This mostly avoids feeling like a grab-bag, and I like the parts of the monk’s high-end features that it retains. I can easily see how this would be fun to play, though I’m not wild about how much duration and currency management goes on. That’s totally normal for high-level 3.x characters, of course.

I guess the first thing to know here is that Rokugan has its own badass-heroic origin story for Taoism, but otherwise lifts Taoism pretty much whole-cloth. The founder of Taoism in Rokugan was Shinsei, who had many badass awesome adventures in the mythic past, and now provides an example for monks, samurai, emperors, and everyone else. The overall style of the Shintao monk is probably deeply mystical in L5R, but in the magic-is-everywhere context of D&D, it doesn’t stand out – and thus doesn’t have “it’s the spiritual one with weird effects” as any kind of unifying theme, and D&D doesn’t have an explicit concept of Void as an element that does cool stuff. This is the version of the monk that is all about beating the crap out of the Shadowlands, so that’s all to the good.

Taken together, the Shintao monk’s elemental dragon theme is really cool, but woefully undersold in its huge collection of 1/day features. The story of the five elemental dragons and top-notch martial arts training (i.e., five bonus feats) defending Rokugan from the horrors of the Shadowlands works for me just fine. The core gameplay is scattered, though – these features don’t suggest much about an approach to challenges. Compare this to the henshin mystic, which is all about beating enemies to death with fire damage in various formats. I like that there are utility powers and it’s not another class that is pure combat, at least.

The henshin mystic, Shintao monk, and tattooed monk are headlining examples of how prestige classes should feel. They have rich stories, organizational backing, and meaning in the setting – I like that henshin mystic is not just the class name, but also how literally everyone would describe that monk’s vocation. Because they do provide mechanical continuity with the monk in so many regards, they scan as being a lot more like subclasses that you don’t choose until later in your career. For the most part, their prerequisites are even pretty sane. They would both be strong foundations for new monk subclasses.

I’m now mostly sure that the next article in this series will cover the 5e monk. That may or may not be what I write for next week, because I am at times arbitrary like that.

Using Ships as a Dungeon, Part 3