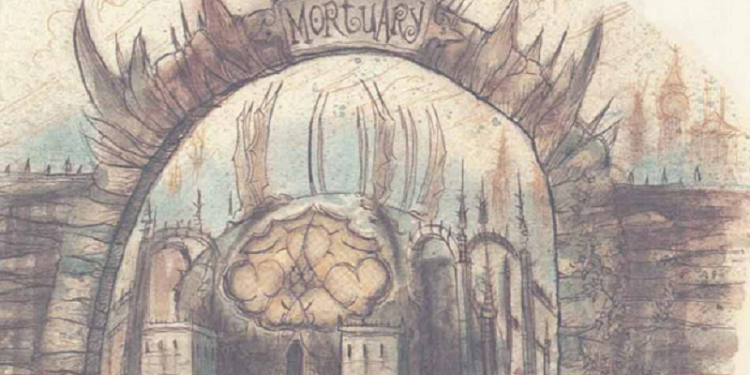 It was very difficult not to write the Xaositects entirely in-character as a Xaositect. However, I decided that three paragraphs of word re-arranging puzzles might not have been super conducive to reader enjoyment. Thus proving once and for all that I am not a Xaositect. Starved Dogs Barking would be so disappointed in me. Regardless, here are two more backgrounds for the original Planescape factions – Dustmen and Xaositects. There is some guidance within the text on how to not make your party members want to strangle you while playing a Xaositect, but it’s just that – guidance. Only you know your group and what they would enjoy. Take a look below, and I hope you enjoy!

Planescape Faction Backgrounds: Athar and Believers of the Source | Mercykillers and Society of Sensation | Dustmen and Xaositects

Life and death are inconsequential states of existence meant to distract and obstruct you from attaining True Death. Attaining True Death is the ultimate goal of all Dustmen.  The only way to reach True Death is to empty yourself of your physical needs and desires, while simultaneously achieving complete denial of your emotions. To do otherwise is to be caught in the cycle of the multiverse where you are reborn again and again. Being reborn denies the lies that are life and death. It is only through True Death that you can escape this cycle and find release for your soul. This is what you have been taught by the Dustmen – referred to as “the Dead” or “Dusties”  by the good citizens of Sigil.

The Dustmen make their home in the Mortuary of Sigil. Here, they care for Sigil’s dead, register their names into the Dead Book, and either bury or cremate the remains of the dead that have not signed Dead Contracts. The Dustmen offer payment for each corpse sent to them – both as a means of keeping Sigil free of rotting bodies in some of the more unsavory areas of the city, and as a way to more easily gather the dead. These people are often known as “collectors.” The Dustmen also offer Dead Contracts in an effort to own the rights to a person’s corpse after death. This allows the Dustmen to raise them as undead to supplement their workforce. Most other factions do not like the Dustmen, finding them distasteful and off-putting. As a Dustmen, did you spend time as a collector before joining the ranks officially? Are you traveling the planes as a way to force yourself to shed your wants and emotions? Are you convinced of the True Death and seek to teach others before releasing that want to find your own end?

Skill Proficiencies: Insight, Medicine
Tool Proficiencies: Alchemist’s supplies
Languages: One of your choice
Equipment: A set of fluids and herbs used in embalming, burial, and cremation practices (doubles as alchemist’s supplies), a set of common clothes or robes, a lamp, a flask of oil, and a tinder box, a belt pouch containing 500 copper pieces

Feature: Dirty Deeds
As a member of the Dustmen, you perform necessary duties for the cities in the planes – even if they find it distasteful that you do so. However, your reputation for being willing to get dirty – but required – jobs done leads others on the planes to seek out the clandestine aid of the Dustmen. When you travel the planes, you can expect those with jobs that need to be done to approach you with offers. These people will assume you will not betray their confidence – unless you develop a reputation for doing so. While assisting in their request, you will receive necessary supplies and lodgings, as well as the requester signing a Dead Contract or providing you with one who will sign a Dead Contract.

The Dustmen seek to relinquish all passion and deny all emotion, but it is a difficult journey for this to occur, and many Dustmen disagree about the best way to go about it. Some believe that through austere living and performing necessary duties you will release any passion you have within you and be able to experience the True Death. Others believe that you must be tempted and resist temptation in order to truly release any passions or desires that you possess. Dustmen can be seen as trusted confidants, provided one is able to get past the stigma of disdain and lack of respect associated with the Dustmen.

The multiverse is not ordered. There is no underlying, unifying force behind it’s whirling, twirling gears. There isn’t a pattern to be discerned in the blood of those churned up by the machine of the planes. There is no song that sings to us of an underlying plan awaiting our understanding. There is just the multiverse, and the chaos it brings with it. The Chaosmen – as they are called by many planar denizens – believe that there is no order, greater truth, or sense to be made within the multiverse. Only through embracing the chaos and randomness of the multiverse can one learn the secrets it has within it. At least, this is what you have been taught by the Xaositects.

The Xaositects make their home within the Hive – a tangled mess of design ideals, tunnels, and architectural inspector nightmares – which resides in the ward of the same name within Sigil. Here, the Chaosmen teach their members how to align with the nature of the multiverse, free from the imposed concepts of order and disorder – which are but false divisions of actual chaos –  and how to deal with the unreality that other claim is reality. As a Xaositect, were you living in the Hive before joining them? Did something shatter your world view and you turned elsewhere for solace? Why are you seeking out the chaos of the planes?

Skill Proficiencies: Nature, Survival
Tool Proficiencies: Gaming set of choice
Languages: One of your choice
Equipment: A gaming set cobbled together from other gaming sets of the same type, a crowbar, a set of common clothes (made out of other sets of common clothes), caltrops (a bag of 20), ball bearings (bag of 1000), a mess kit, a blanket, a belt pouch containing 10 gp in various denominations

Feature: The Colonies
Unbeknownst to others, the Hive is not the only gathering place for Xaositects. The Xaositects have numerous centers across the planes that can assist a fellow chaosman in need, provided they get something in return. The Xaositect can expect to be offered a reasonable array of equipment and services at these locations, but coin is rarely accepted. Xaositects prefer to barter when it comes to dealing with others members.

The Xaositects tend to speak and interact in a disorganized manner. A typical sentence might look something like this: sentence look this typical might like a something. The unexpected delight them, and the height of wit might be repeating yourself. Of course, Xaositects know that their behavior can be off-putting to others, and switch between this type of interaction and more standard interactions – always when least expected. If others don’t enjoy or tolerate your presence, you won’t get to join in on the fun. Walking a fine line between chaotic and companionship is a struggle, but a necessary one when traveling with others. There are those who see the Xaositects as threats to law and order, and entire planes where their presence is seen as unwelcome. Still, like the insects their headquarters evoke, the Xaositects find a way to thrive.